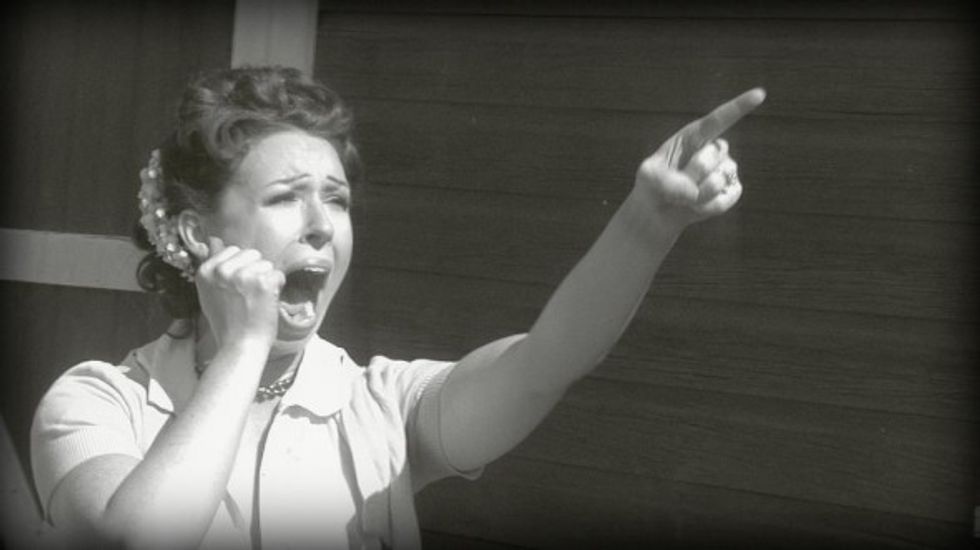 A couple of big mainstream Republican groups commissioned a major report on the party's prospects with women, and the astonishing result is that theladies just aren't that into Republicans. Inorite?

[F]emale voters view the party as “intolerant,” “lacking in compassion” and “stuck in the past.”

Women are “barely receptive” to Republicans’ policies, and the party does “especially poorly” with women in the Northeast and Midwest, according to an internal Crossroads GPS and American Action Network report obtained by POLITICO. It was presented to a small number of senior aides this month on Capitol Hill, according to multiple sources involved.

The report found that while 39 percent of women viewed Democrats unfavorably, nearly half -- 49 percent -- had an unfavorable view of Republicans. Happily, even Republicans who couldn't see the study's results coming are still able to carry firearms in several states.

Still, the report's backers did what they could to polish the big ol' turd, since they know that ladies are always impressed by a good housekeeping demonstration:

The report — “Republicans and Women Voters: Huge Challenges, Real Opportunities” — was the product of eight focus groups across the country and a poll of 800 registered female voters this summer. The large-scale project was a major undertaking for the GOP groups.

“The gender gap is hardly a new phenomenon, but nevertheless it’s important for conservatives to identify what policies best engage women, and our project found multiple opportunities,” said Dan Conston, a spokesman for the American Action Network. “It’s no surprise that conservatives have more work to do with women.”

The report did have several important recommendations for how Republicans could gain support from more women, such as

neutralizing Democratic attacks that the GOP doesn’t support “fairness” for women; “deal honestly with any disagreement on abortion, then move to other issues”; and “pursue policy innovations that inspire women voters to give the GOP a ‘fresh look.’”

The report did not specifically suggest "stop electing misogynist dickheads who say incredibly stupid shit every few days," but most insiders said that was strongly implied.

Among other recommendations, the report suggested that republicans should promote policy positions that “are not easily framed as driven by a desire to aid employers or ‘the rich.’” They can still pursue policies that will do exactly that, but they just need to make sure that it's not easy to spin them that way. If only they could find something as cool as renaming inheritance taxes as "the death tax."

Also, some of the policies that Republicans had hoped would appeal to women just plain never caught on. Retired-by-the-voters Rep. Eric Cantor's emphases on charter schools and flexible work schedule, for instance, turned out to be at the very bottom of the focus groups' most-liked policies.

There was one female demographic that actually tended to be friendlier to Republicans than Democrats: "Married women without a college degree view Republicans favorably, the polling shows." We'll give it about a week before some fairly prominent male Republican blows that slim advantage by regaling a county fair with a hilarious joke about how these little ladies, god bless 'em, have the good sense to listen to what their husbands tell 'em to think.

On the top four issues that women in the survey said mattered most to them, "the economy, health care, education and jobs," women tend to vote heavily Democratic. Strangely, even though House Republicans insist that jobs and the economy are their top priorities, women seem to perceive them as more interested in repealing Obamacare one more time.

The report had a very carefully phrased recommendation on equal pay, the policy that the focus groups identified as the being most likely to help women:

“Republicans who openly deny the legitimacy of the issue will be seen as out of touch with women’s life experiences,” the report warned, hinting at GOP opposition to pay-equity legislation. It’s the policy item independents and Democrats believe will help women the most.

Obviously, the answer is to stop openly denying that pay equity is a problem while continuing to pursue policies that won't push that socialist agenda.

And here's some innovating thinking, in three areas the report suggested Republicans could make gains with women: First off, they should blunt Democratic claims that GOP policies are unfair by saying nuh-uh, Democrats are unfair, since Dems support “growing government programs that encourage dependency rather than opportunities to get ahead.” Because women don't want to be dependent, they'll happily support efforts to cut food stamps and healthcare subsidies.

On abortion, the recommendation is that Republicans “deal honestly with any disagreement on abortion, then move to other issues.” In other words, avoid talking about it, especially how rape babies are a blessing, even though you know they are.

And finally, how about reaching out to women with a nice surprise now and then?

The report suggests lawmakers and candidates inject “unexpected” GOP policy proposals into the debate as a way to sway female voters. Suggestions include ways to improve job-training programs, “strengthening enforcement against gender bias in the workplace” and “expanding home health care services by allowing more health care professionals to be paid by Medicare for home health services.”

Those should actually be pretty welcome issues for women. We can hardly wait to see how Rick Santorum thinks they're witchcraft.

The report is expected to be very influential with Republican lawmakers and opinion-makers, who will almost certainly respond to it by tweeting photos of Ted Kennedy's car at Chappaquiddick and calling Bill Clinton a rapist.