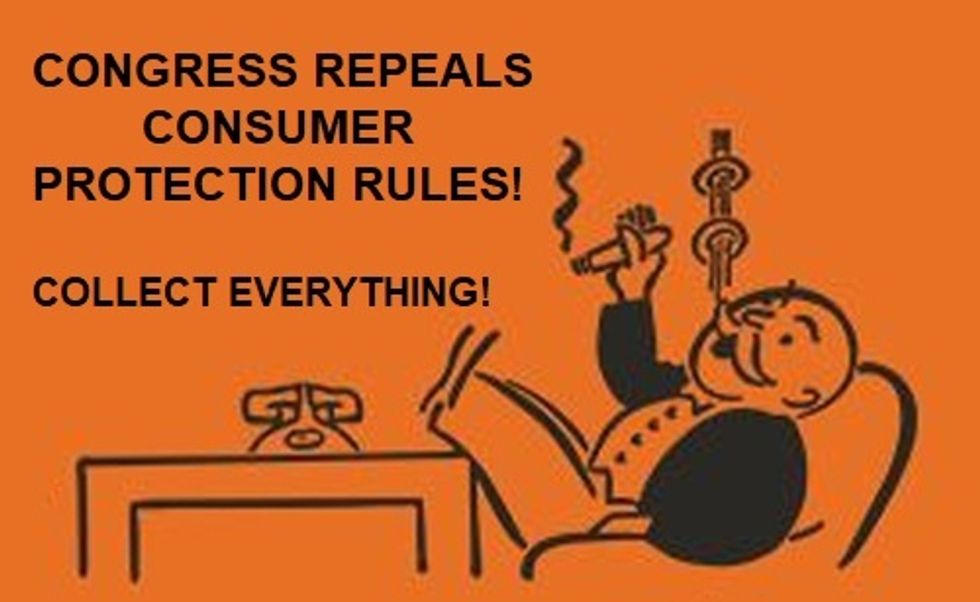 It's easier to win when you're the banker.

The Republican-held Congress doesn't get a lot of credit for its huge legislative accomplishments. While it hasn't actually passed much in the way of new laws that make America a better place to live, it's certainly done a bang-up job of repealing Obama administration regulations that protected Americans' health, environment, and consumer rights. Last night, the Senate managed another win of that sort, getting the 50 votes (plus a tie-breaker by Mike Pence) needed to undo a Consumer Financial Protection Bureau rule that allowed consumers to file class action suits against financial institutions that screwed them over. It's just one more step in the Republican effort to murder the CFPB, which virtually all Republicans hate because it sometimes keeps big banks from making merely obscene profits instead of the grossly obscene profits they're entitled to.

(Yes, that hoity-toity "math" means every Democrat voted against the bill, because Democrats and Republicans are exactly the same.)

Credit card companies, banks, and other companies from payday lenders to cable providers have increasingly used fine print in customer agreements to force all disputes with consumers into private arbitration, where the companies are far more likely to win than in court. The now-defunct CFPB rule would have restored the rights of individuals to sue, and the banks just hated that, because then they might not be able to gouge customers with phony fees, deceptive terms, and predatory business practices. Thank god, those greedy consumers have been put in their place now, and the CFPB, which Republicans like to call a rogue agency, is one step closer to the grave.

Republicans framed their gift to the financial industry as a victory for fairness and efficiency, since obviously America will now be a lot more prosperous without banks facing the burden of frivolous lawsuits just because they think of innovative ways to part customers from their money, like Wells Fargo's fraudulently creating unwanted accounts (and fees!) for customers who never technically "asked for" additional accounts. Besides, if we allow class-action lawsuits against banks just for ripping people off, then lawyers will make money, and Republicans are very proud to say they are opposed to lawyers making money, if they're lawyers for defrauded consumers, at least.

The repeal of the rule was opposed by consumer advocates and veterans groups, because veterans have been targeted for a lot of scammy loans by the nice people in the payday and short-term loan industry. That potential screwing of The Troops led to the only two "no" votes by Republicans, from South Carolina's Lindsey Graham and Louisiana's John Kennedy. John McCain got all mavericky and voted to hand vets over to the tender mercies of the financial sector, as did Jeff Flake, who may think Donald Trump is mean but knows what's good for the banks is good for America, and Alaska's Lisa Murkowski, who cast the last vote needed to bring the total to 50. Don't count on any grateful constituents meeting her at the airport and thanking her for standing up for them this time.

Still, at least Ohio Democrat Sherrod Brown, who along with Elizabeth Warren has been one of the top advocates for the embattled CPFB, managed to sum up the significance of Mike Pence's frequent visits to the Senate for a tie-breaking vote:

"The vice president only shows up in this body when the rich and the powerful need him," Sen. Sherrod Brown (D-Ohio) said [...] "This vote is all about a consumer's right to a day in court[.]"

Also, since the rule was repealed under the charmingly fucked up Congressional Review Act, which Rs have used to undo regulations against dumping mine tailings into streams and selling guns to the mentally incompetent, the CFPB is also forbidden, in perpetuity, from ever introducing another regulation that does what the overturned rule did. Any restoration of the ability of consumers to sue scammy banks or credit card companies would have to be passed by some future, hypothetically sane Congress.

So let's knock off all that talk of a do-nothing Congress -- they're getting plenty done to fuck over average consumers so the rich can get richer. The resulting job boom is clearly just around the corner, and we'll all be rich, as long as nobody who gets a job ever runs afoul of the fine print in a credit agreement.

Yr Wonkette is supported by reader contributions. Please click her to give us money, and if you feel we haven't delivered the finest snark, we won't even force you into arbitration.