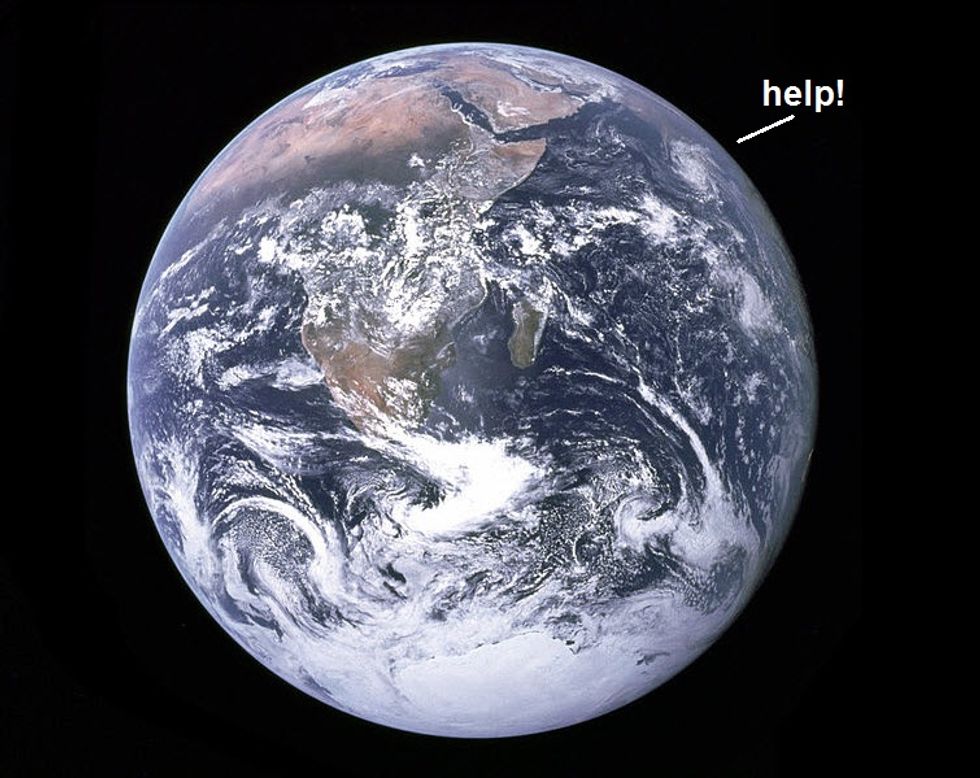 The House Science Committee, in a move that took absolutely no one by surprise, voted last week to slash NASA's budget for Earth sciences, because apparently the planet we live on has had enough science done to it and doesn't need any more. NASA is supposed to be about rockets and heroic space stuff, so the agency's budget did get a nice additional $200 million for space flight, while roughly $300 million has been cut from the 2016-2017 budget for Earth sciences. Take that, Earth!

Science Committee Chair Lamar "Climate? What Climate?" Smith hailed the budget as a much-needed shift in priorities toward cool rocket stuff and away from studying climate change, which is not real anyway, and if you don't study it, it will just cease to be a thing:

We must restore balance to NASA’s budget if we want to ensure the U.S. continues to lead in space for the next 50 years. And we must continue to invest in NASA as the only government agency responsible for space exploration.

Space is cool, and rockets are cool, and neither of those cool things will force socialism on America by suggesting that we need to do anything about all the CO2 we're spewing into the atmosphere, which is definitely not anywhere near as cool as big rockets, wow.

NASA Administrator Charles Bolden -- who saw this coming and testified in March that while rockets and space exploration are indisputably cool, "We can’t go anywhere if the Kennedy Space Center goes underwater" -- was not especially impressed by the House committee's new priorities for NASA. In a statement issued in response to the vote, Bolden, a former astronaut who knows exactly how cool big rockets are, warned:

The NASA authorization bill making its way through the House of Representatives guts our Earth science program and threatens to set back generations worth of progress in better understanding our changing climate, and our ability to prepare for and respond to earthquakes, droughts, and storm events.

NASA leads the world in the exploration of and study of planets, and none is more important than the one on which we live.

In other words, NASA's administrator is a socialist who wants to take away your inalienable God-given right to drive the biggest SUV you can afford.

Not surprisingly, scientists, who are all getting rich off climate change studies, are pretty darned outraged about the cuts, which must mean that the House Science Committee is doing its job right. Marshall Shepherd, a former scientist at the Goddard Space Flight Center, published an op-ed in the Washington Post warning that the cuts would have an impact far beyond damaging climate studies:

I assure you that the level of cuts proposed for NASA’s earth sciences program would not only harm but end many programs and jeopardize many federal and private sector jobs. The engineering, ground systems, science, and support work of NASA earth science missions is supported by some of the most vibrant private aerospace and science-technology companies in the world. And they are U.S. companies.

Similarly, a Democrat on the Science Committee, Texas's Eddie Bernice Johnson, wrote at The Hill that cuts to the Earth Sciences budget would jeopardize "research [that] is used by the Department of Defense to help keep our troops safe," as well as instruments that help "predict floods, droughts and hurricanes." But has she really thought this through? The Troops can always just watch the Weather Channel, can't they?

Yr Wonkette would like to urge Democrats on the Science Committee to just give up and focus their attention on truth in labeling, officially renaming the panel the House "Science" Committee. We also suppose that NASA is going to have to update the header on their Earth Sciences Division webpage: