Republicans So Awful, Obama Wishes They'd Be More Like Bush 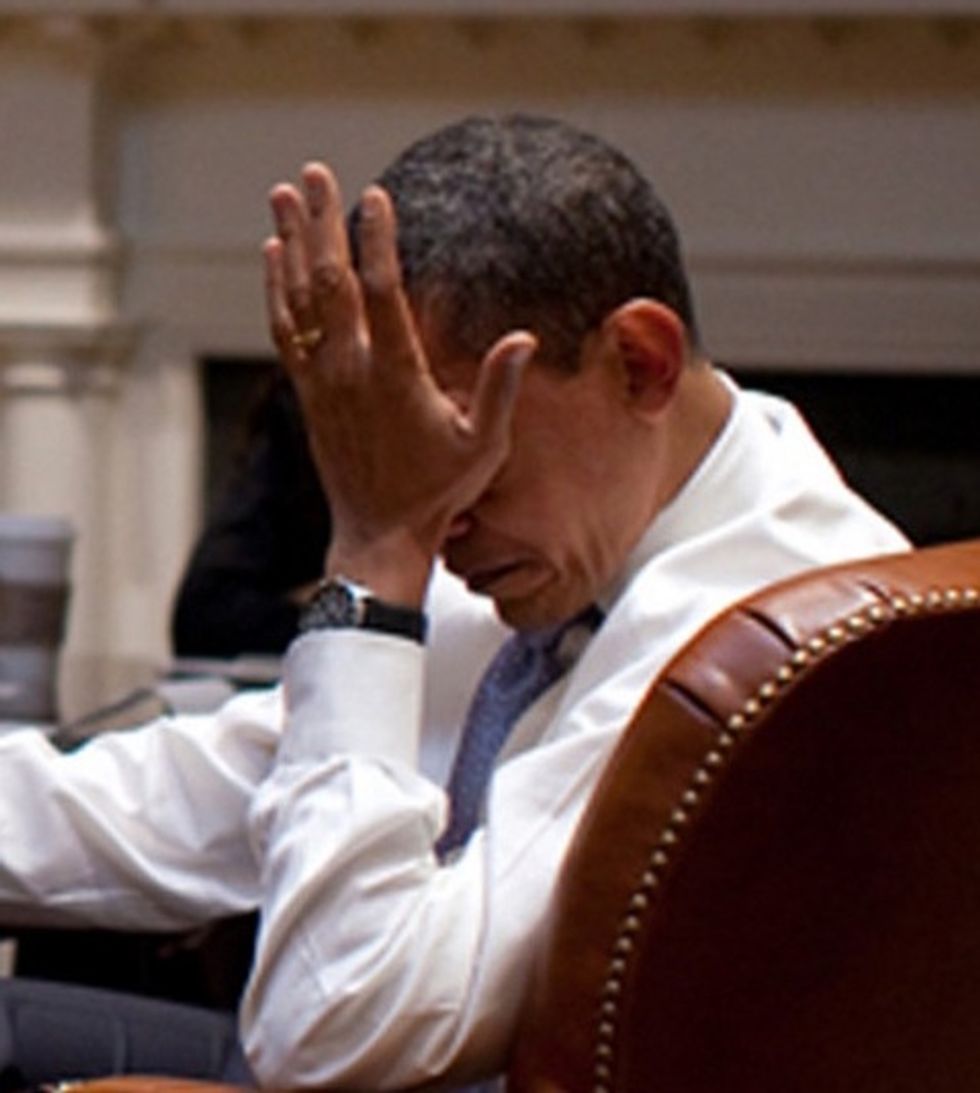 Here is your foreign secret Muslim "president" Barry HUSSEIN Soetoro O'Bama, saying some sounds about how "refugees" are not the same thing as "terrorists." As if! That's exactly what he would say, isn't it? If he didn't really love America and want to keep it safe from Them. (Who is the Them? Duh! The Them is Not Us.)

For the moment, the Them is Syrian refugees. At the G20 summit in some Turkish country that ain't America, the president said:

It is very important [...] that we do not close our hearts to these victims of such violence and somehow start equating the issue of refugees with the issue of terrorism.

As Republicans who want Obama's job have been busy explaining, this is dumb stupid WRONG, because most of the refugees are Muslim and Muslims are terrorists, and if we want to defeat the terrorists, we must declare a holy war on Islam. Jesus hu-Akbar!

Which is why, if we're going to allow any so-called refugees into our country -- not that we should -- they'd goddamned better be Christians. Everyone knows Christians are the good guys. Ted Cruz can personally vouch for every single one of 'em. Jeb Bush too. As well as their fellow American Rupert Murdoch:

Yes, proven Christians. None of you faker types. Don't try to play-act like you're a Christian unless you've told at least TWO Starbucks baristas that your name is Merry fucking Christmas. This ain't no Nazi Europe, where you can try to survive by pretending your father's mother wasn't a ... well, you know. A Them.

The United States has to step up and do its part. And when I hear folks say that well, maybe we should just admit the Christians but not the Muslims — when I hear political leaders suggesting that there would be a religious test? For which person, who is fleeing a war-torn country, is admitted? When some of those folks themselves come from families who benefitted from protection when they were fleeing political persecution? That's shameful.

Yes, that's shameful. That's also President Obama calling out Ted Cruz and Marco Rubio, who have both told harrowing tales of their parents narrowly escaping the persecution and oppression of Castro's Cuba -- which, fun fact, is literally a Garden of Eden paradise compared with Syria. Yes, we said it, and we'd say it again, so put that Cohiba in your v-hole and smoke it.

You know, I had a lot of disagreements with George W. Bush on policy. But I was very proud, after 9/11, when he was adamant and clear about the fact that this is not a war on Islam. And the notion that some of those who have taken on leadership in his party would ignore all of that --

[Including, AHEM, George's own brother, the president did not add, but we wouldn't want you to miss that point.]

-- that's not who we are. On this, they should follow his example. It was the right one. It was the right impulse. It's our better impulse. And whether you are European or American, the values that we are defending, the values that we're fighting against ISIL for, are precisely that we don't discriminate against people because of their faith. We don't kill people because they're different than us. That's what separates us from them. And we don't feed that kind of notion, that somehow Christians and Muslims are at war. And if we want to be successful at defeating ISIL, that's a good place to start, by not promoting that kind of ideology, that kind of attitude. [...]

And it is good to remember that the United States does not have a religious test. And we are a nation of many peoples of different faiths. Which means that we show compassion to everybody. Those are the universal values we stand for.

That Obummer sure is naive, isn't he? Because when he says that's not who "we" are, just who the hell is he talking about? The heritage-not-hate Americans who say it's called the WHITE House for a reason, boy? The "we" who told European Jews trying to escape the Nazis, "Sorry not sorry, but we're all filled up here, can't possibly make room for you or your children"? The "we" who came here, stuck a flag in it and called it "India" and then killed -- or, if "we" were feeling generous, "assimilated" -- all the Thems who were in the way?

America is in real bad shape when President Obama is invoking George fucking W. fucking Bush as a model of moral courage and leadership. But that's where "we" are today. With a political party of xenophobic, fear-mongering cowards exploiting the tragedy in Paris to let their fuck-you flags fly and let it out, shamelessly and without code words and dog whistles: America is for Christians only. The rest of you -- of us -- are not welcome.

Which is why we, the Yr Wonkette we, would like to remind you yet again -- and not for the last time, so get used to it -- of our Official Wonkette Editorial Policy on Syrian Refugees: