Republicans Suing Obama Again, This Time About The Mexicans 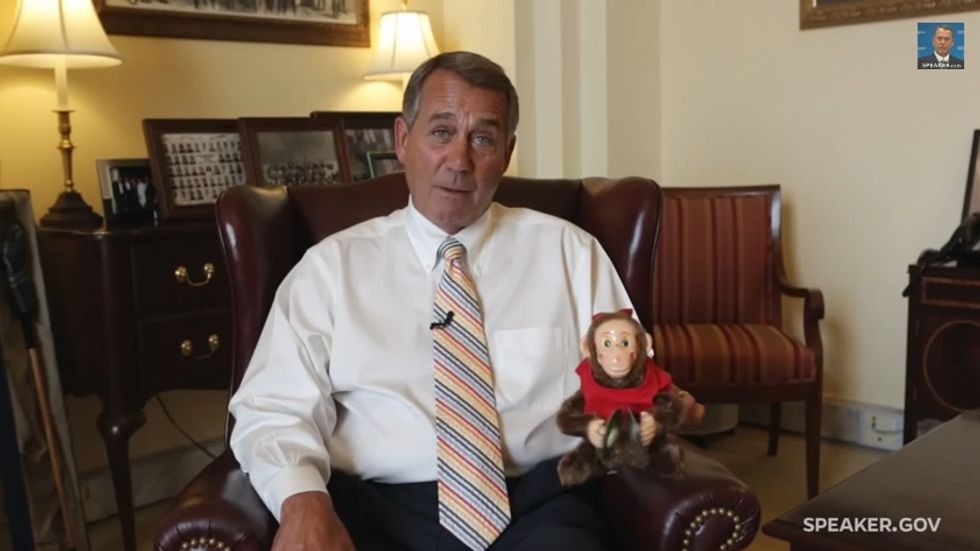 Some days we almost feel sorry for John Boehner, what with having to herd the feral cat farm that is the House Republican caucus while simultaneously convincing the Beltway’s Very Serious People that he, too, is a Very Serious Person who wants to Get Things Done and Has Ideas and Jobs, Jobs, Jobs. So when the feral cats are demanding that he Impeach!!!1! over the fake Benghazi scandal or the fake IRS scandal or Obamacare or not deporting all the Messicans or not having the proper amount of melanin for a POTUS, The Boehner has to find a way to mollify the raving, addled lunatics who would just as soon depose him and arrest the president for TREASON, without looking like a raving, addled lunatic himself, lest he lose the power and position he clearly holds so dear. [contextly_sidebar id="ICToMposu0rDt2Dh9w89GhusvL6AWcYT"]

It’s enough to drive a man to drink. And smoke. And hit the tanning bed. And drink some more. And take another smoke break. And maybe have a good cry. And then sue the president for the second time in three months.

The crux of The Boehner’s new lawsuit -- the first one, back in November, you’ll recall, was a yammering hot mess about Obamacare and tyranny and what not -- is that Emperor Obama is doing tyranny to America again, this time by not rounding up every single goddamn undocumented Messican (all of them) and putting them on the first Greyhound back to Messico, like Jesus H. Reagan would have wanted.

House Speaker John Boehner is eying another lawsuit against President Barack Obama — this time against his executive actions to protect nearly 5 million undocumented immigrants from the threat of deportation.

The Ohioan privately discussed his plans in a House Republican conference meeting on Tuesday.

"We are finalizing a plan to authorize litigation on this issue — one we believe gives us the best chance of success," he told his members, according to a source in the room.

It’s not like this possible lawsuit -- assuming, of course, that they can find a lawyer who is not Larry Klayman -- runs counter to years of jurisprudence on the executive’s powers of prosecutorial discretion … oh, wait, that’s exactly what it does:

The president’s discretion to enforce the immigration laws has always been the cornerstone of a de facto guest-worker (or, if you want, caste) system from which most Americans have greatly benefited. That’s why Republicans’ claim that the president is shredding the Constitution sounds so odd to people knowledgeable about immigration law. He’s just doing what countless Congresses have wanted him to do, and have effectively forced him to do, so that Congress itself could avoid charges that it has created a two-tier system of citizenship where the bottom tier is allowed to stay in this country and work, but is not allowed to vote, to benefit from welfare programs, to travel freely, or to enjoy the full protection of workplace laws.

Also, too, if Congress wanted MOAR DEPORTING -- which, by the way, Obummer was doing at a pretty healthy clip even while Republicans were demanding that he Build The Danged Fence and maybe make it electric, too, just to fry up some illegal-immigrant children nice and good -- they could always give ICE more money to do so:

The rise in deportations was partly the product of Congress continuing to give ever-more money to Immigration and Customs Enforcement, and partly the product of ICE (and higher-ups at the Department of Homeland Security and the White House) deciding how to spend that money. This is typical among law-enforcement agencies, at any level. Law enforcement officials and prosecutors get resources from the legislature, but the legislature doesn't micro-manage how those resources get spent. But the resources a law enforcement agency has are limited, so they have to decide what kinds of enforcement efforts are worth their time.

So, surprise, this lawsuit is stupid. But it’s not like The Boehner’s alternatives are all that swell, either. Sure, he could Impeach, but the dumb Senate probably wouldn’t go along, and anyway, having a basically all-white caucus impeach the first black president for helping brown people would probably not help Carly Fiorina become the next occupant of 1600 Pennsylvania Avenue, as God obviously intends. [contextly_sidebar id="4GfpMfaKU5GBmbo4TTagCtlAFcZJWrcT"]

Instead, the House attached a deport-the-Mexicans-even-the-children provision to the Department of Homeland Security funding bill, which Senate Dems will filibuster or President Obama will veto. And then the House will either have to cave -- which will make Sean Hannity soooo angry -- or not fund DHS at all, which means no Mexicans will be deported and all the ISIS people can come over here and do terrorism. It’s quite the dilemma, you see.

Somebody get the man a merlot and a smoke.