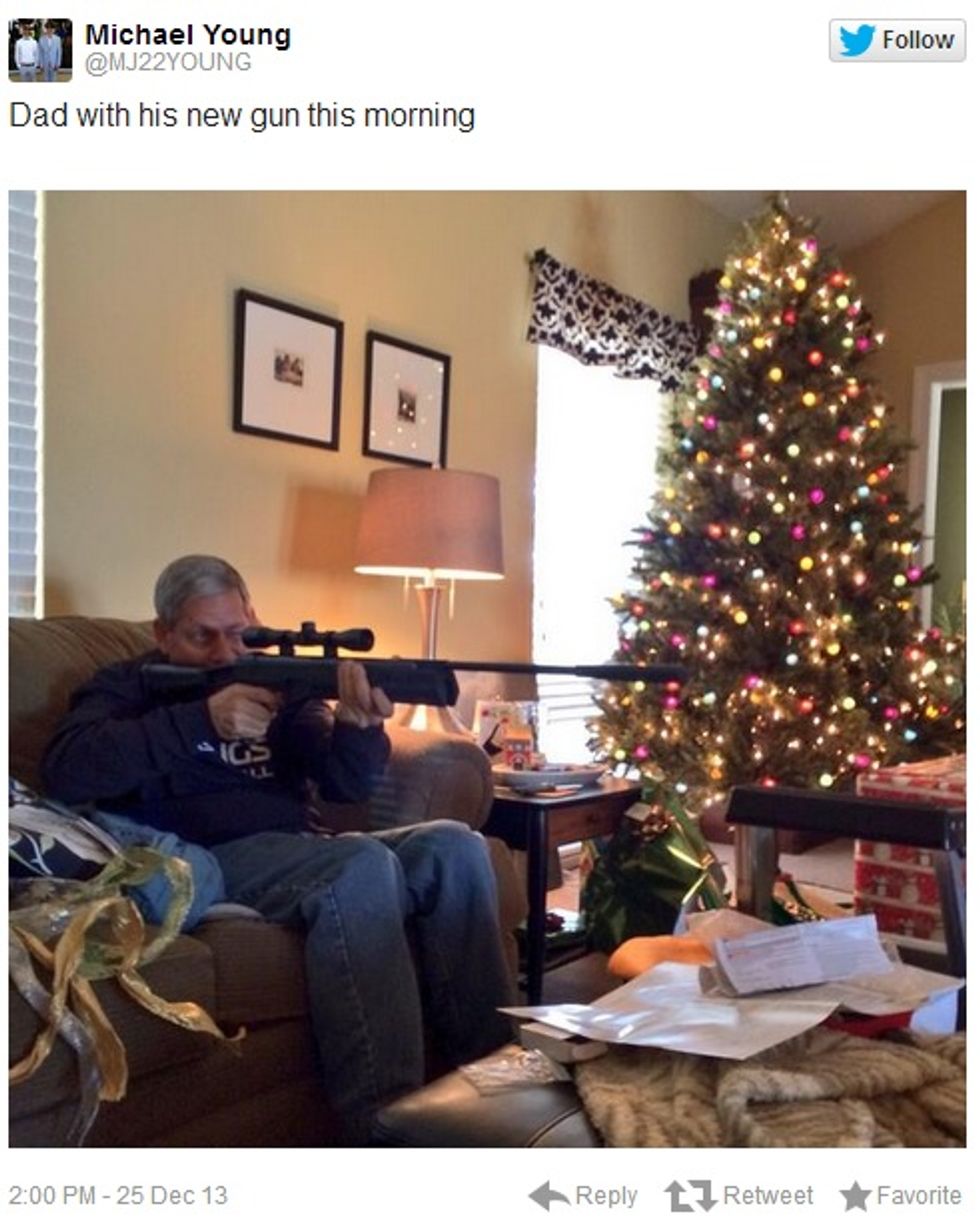 We're back in the Wonkette Bunker O'Love, the underground safe room on our Idaho compound that we reserve for stories about guns and the wonderful people who fondle them. And as usual, we have some inspiring tales of proud Americans protecting their lives and property from threats foreign and domestic -- mostly domestic, as all three of our top stories involve responsible gun owners shooting family members and neighbors, which is just the price we have to pay for Liberty.

That pic up top, incidentally, is from a charming Buzzfeed collection of people who got guns for Christmas and shared photos of their prizes on social media. We don't really begrudge Dad his rifle up there -- looks like an actual hunter, at least. But there are also a whole passel of teen boys who got AR-15s for Christmas -- as we know, they're traditionally the most stable, responsible part of the population, famous for their excellent decision-making. They should definitely be armed. Say, wasn't there a song about a girl who got a rifle for Christmas?

Our first story of responsible gun ownership comes from East Lampeter Township, Pennsylvania, where 2-month-old Kestyn Davis was fatally shot by a family member on Christmas Eve; the exact circumstances of her death have not yet been released. In a news report Thursday, District Attorney Craig Stedman did at least take the time to suggest that people who own guns should be careful what they do with them:

"We talk about responsible gun ownership and dealing with firearms and emphasize the responsible tonight. Independent of this case, if you own a firearm pay attention to being responsible."

Yes, responsibility is nice. But anyone who suggests that gun owners should be required to learn something about safely handling firearms is a gun-grabber who hates freedom, and must be driven out of a job. In the meanwhile, occasional reminders to "be responsible" will have to do.

Our next story is just as relentlessly non-funny, and all too familiar: In Colorado Springs, a 14-year-old girl was shot to death by her responsible gun-owning stepfather, who thought she was a burglar. Apparently she was sneaking back into the house through the basement at 6 a.m. after slipping out of the house sometime during the night. Stepdad had called 911 to report a burglary in progress, but no doubt aware of the gun-fondling dictum that "when seconds count, the police are just minutes away," decided to handle the intruder himself.

Especially enlightening are the commenters at The Blaze, who are universally in agreement that you have to identify your target before shooting and announce yourself, or at least keep low-level lighting on throughout your house. This could never happen to anyone in a comments section. Also charming, the two or three who suggested that if the 14-year-old-girl were not such a slut, sneaking out and whoring around, she would be alive today.

And finally, a responsible gun owner who killed someone he wasn't related to: In Volusia County, Florida, 69-year-old Bruce Fleming was standing in his backyard on Christmas Day when he was killed by a stray round from a neighbor's home gun range. The neighborhood is in an unincorporated area and not subject to restrictions on firearms use within city limits; Florida law allows people to shoot guns in their backyards, just as long as they don't do so “negligently or recklessly.” We're guessing this might be one of those "not allowed" cases, but then again, Florida. Remember, folks, higher berms! In fact, probably a good idea to stay in your bunker all the time like we do.

Update: An update to the Daytona Beach News-Journal, one of the sources cited by Raw Story:

While initial reports stated that witnesses told deputies a stray bullet may have come from a nearby shooting range with a raised berm recently built by a neighbor, officials don’t believe the bullet came from that property, [Sheriff's spokesman Gary] Davidson said late Wednesday afternoon.

Wonkette regrets the error -- it was apparently a different responsible gun owner firing in a semi-residential area, not the owner of the private gun range. Hat tip to Steve S. on Facebook for the correction.

We don't know if any of the responsible gun owners stood over the bodies of those they shot and asked "What part of 'shall not be infringed' don't you understand?" But we're pretty sure it got said again in a comments section somewhere.

It's been a year and a not quite a couple weeks since Newtown. Since then, Slate estimates that approximately 34,672 have been shot to death in the U.S. On the other hand, there's almost certainly some robberies or even worse crimes that were prevented, so it all evens out.