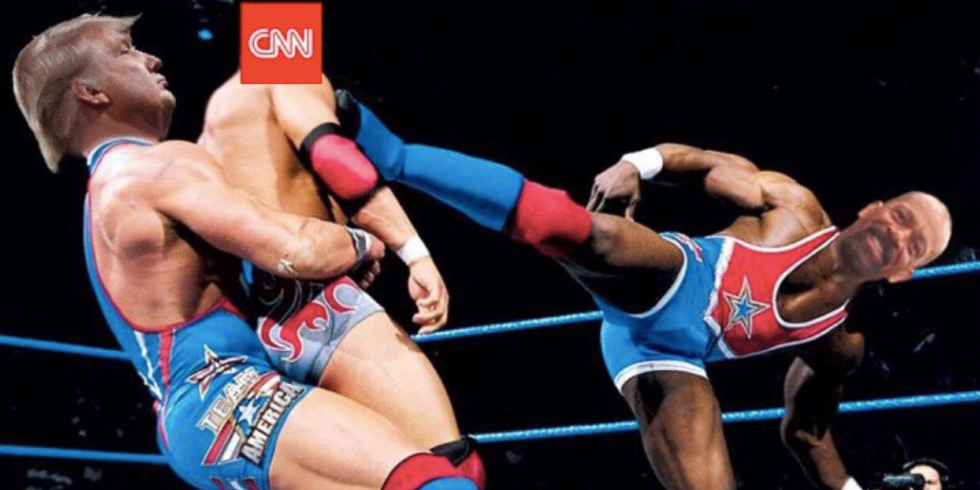 BE AFRAID, liberals! Be very afraid! We have offended the great David Clarke, private citizen and public spectacle. The ice we skate is getting pretty thin, and soon we'll be swimming in the warm waters of his wrath! Oh, noes!

What the hell is SMASH-MOUTH POLITICS #MAGA? Well, Commie, it's threatening to do violence to journalists if they report that the FBI got a warrant for your emails after you abused your office to harass a guy who glared at you on an airplane.

Detroit News reporter Robert Snell breaks down the whole story in his Twitter feed. Passenger Dan Black was met by police and bomb-sniffing dogs after a brief exchange with Clarke on an airplane. Clarke's texts make it clear he called in the cavalry to investigate Black for the crime of disrespecting a man with 30 fake medals pinned to his chest, but later the big, bad sheriff claimed he felt menaced by that scary dude standing over him. The FBI investigation was eventually dropped, and thus it is FAKE NEWS to report that it ever existed.

The former Milwaukee sheriff has now deleted this tweet where he instructed his followers to assault members of the press. "Punch them in the nose & MAKE THEM TASTE THEIR OWN BLOOD." But don't go thinking Twitter made him take it down in response to the thousands of reports that he was inciting violence! He just loves to play with those snowflake libs who are triggered by the sight of his swag hats.

Heaven forfend! Not a can of tweet rear-end whoopin'! Is the Sheriff of Crazytown going to open up on us again with a bunch of fabricated quotes from Hillary Clinton, Chelsea Clinton, and Thomas Jefferson? Or just shout some more about how OWNED we are?

Okay, endless screaming it is. In case you aren't up on Clarke's horrorshow bio, he presided over a Milwaukee prison where four people died, including a man who was deprived of water for seven days and a newborn who died while his mother gave birth in shackles. Clarke is named in several lawsuits for misconduct while in office, and this June a jury awarded $6.7 million to a woman who was repeatedly raped by a guard in Clarke's prison when she was a pregnant teenager.

Clarke is a truly terrible person, so naturally Donald Trump loves him. Clarke resigned as sheriff in August of 2017, announcing he was headed to work at the Department of Homeland Security. To which we said in the Sekrit Chat Cave, "LOL! Like that guy could ever pass a security clearance!"

That job never came through, so now he spends his time shouting loony shit on Fox teevee and publishing occasional articles with titles like, "Systemic Racism is So Rare in America, the Media Just Can't Stop Lying About It." Plus, the tweeting. The guy tweets A LOT.

LYING LIB MEDIA and liberals, do I have you attention yet or do you want more?