Return Of The Lucky Duckies: Fox's Greg Gutfeld Wishes He Was Poor So He Could Live It Up 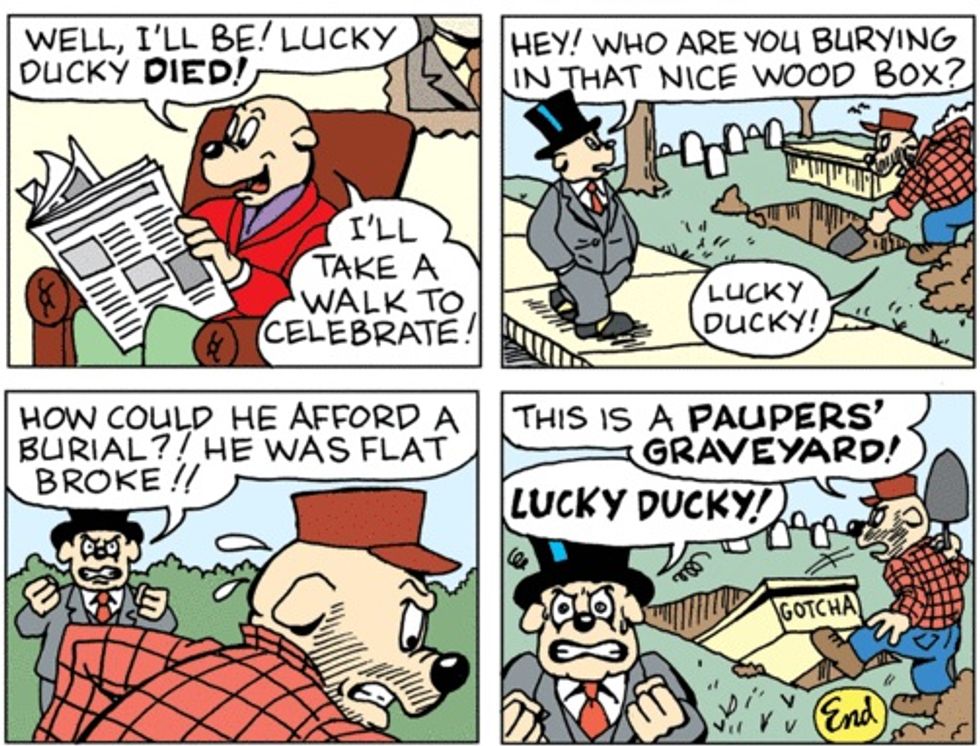 Hey, kids, remember when the Wall Street Journal started using the charming phrase"lucky duckies" to refer to those high-living Poors who don't pay any taxes at all, except for payroll taxes, sales taxes, Social Security tax, property tax added to rentals, etc? Would you believe that was back in 2002, and that Tom the Dancing Bug has been mocking it since then, and do you feel really old now? Well have we got news for you! Lucky Duckies are back, even though they never really went away, of course. On Fox's The Five Tuesday, congealing sack of rancid hobbit semen* Greg Gutfeld took the occasion of Tax Day to not only complain about those lucky poors who don't have to pay no federal income tax, but also to pretty much lie about them, too, because that is how he roll.

Poor old Greg is really feeling burdened, what with the taxing and the taking and the hurting:

Yay, it’s Tax Day, or for 70 million households, Tuesday, because for them they pay no federal income tax, so they’re left wondering why everyone’s at the post office, sweating through their shirts

This is just the best lie of them all -- because as we suppose Greg Gutfeld knows, even if you don't pay federal taxes, you still have to file a 1040 or a 1040EZ -- especially if you want to claim that big Earned Income Tax Credit that makes you King Moocher. Or maybe he actually is that stupid -- one should never assume. And of course, he completely overlooks the detail that the poorest tax filers are targeted for the highest tax preparation fees by unscrupulous operators, because come on, if they fall for a scam like that, it's their fault. That kind of bad decision-making is, after all, why they're not making Greg-Gutfeld-level money. And who benefits from all those taxes? Not the defense industry or corporate welfare recipients, of course, but "hucksters" like Harry Reid, who apparently gets all the tax money himself then gives it to the useless eaters on welfare so he can stay in power:

“Useless in productive society, hucksters rely on us as their welfare. Reid and his ilk look at America and see millions of wallets and purses, ready to be picked to perpetuate their power.”