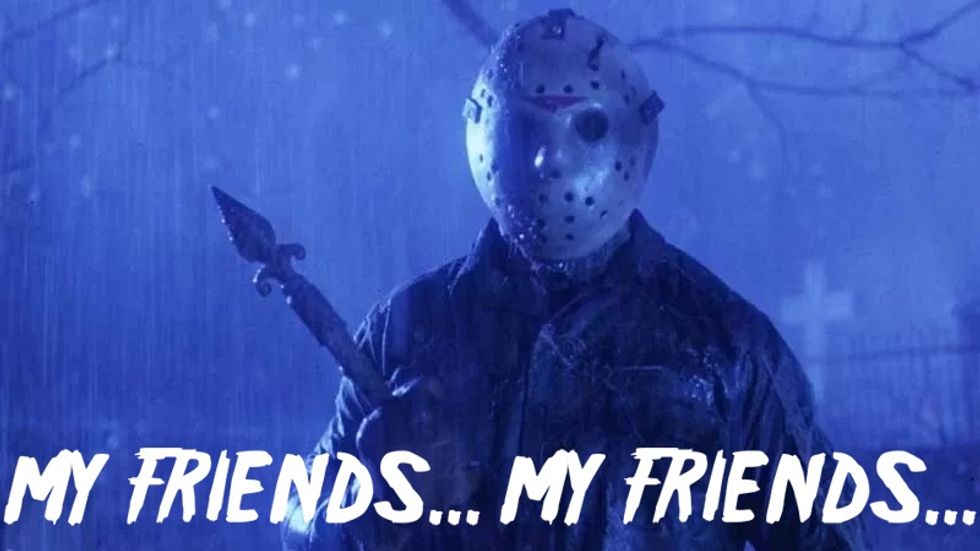 FIVE AND A HALF SEQUELS, ALAN!

Get ready to assume a fetal position under your desk, Wonkers, and it has nothing to do with the damned hurricane headed for Florida: John Jesus H. Jumped-Up Christ on a fucking Segway McCain, after voting against the so-called "skinny" repeal of the Affordable Care Act in July, has given some careful thought to the prospect of his legacy, and now says he'd just love to kill Obamacare through the terrible bill by Lindsey Graham and Bill Cassidy, which would convert the ACA into a block-grant program through the states.

We warned you not to assume the monster's dead, even if the credits have rolled.

The Hill reports McCain cheerfully saying he's looking forward to helping his old pal Lindsey Graham, sounding for all the world as clueless and fatuous as Aarfy blocking a frantic Yossarian's way out of the bomber's greenhouse nose:

Asked if he supported [the Graham-Cassidy bill], McCain told reporters, "Yes. You think I wouldn't be?"

Graham is one of McCain's closest friends.

Before voting down the "skinny" repeal, he'd insisted the Senate must approach any new healthcare legislation through "regular order," with the normal machinery of introducing a bill in committee, holding hearings, all that good old Doing The People's Business stuff that McCain extolled in his attempt to be Jimmy Stewart. Now?

"If it's not through regular order then it's a mistake, but it doesn't mean I wouldn't vote for it," McCain said when asked about his previous statements.

Give that man a pipe to poke Yossarian in the chest with and let him get the squadron lost somewhere over Italy, why don't you? It can't be a coincidence that the third member of the Republican cabal writing this mess is Nevada's Dean Heller.

The Washington Post briefly summarizes just what a radical departure from the ACA Graham-Cassidy-Heller would be, turning all control of the ACA's healthcare markets over to the states:

Rather than funding Medicaid and subsidies directly, that money would be put into a block grant that a state could use to develop any health-care system it wants. It also allows states to opt out of many ACA regulations. “If you like Obamacare, you can keep it,” Graham has said, using a common nickname for the health-care law. “If you want to replace it, you can.”

In reality, that may not be true. The Medicaid expansion and subsidy funding would be cut sharply compared to current spending, going to zero in a decade.

Isn't Senator Graham just a little scamp, playing with Obama's ill-considered line about how people could keep their really shitty insurance if they liked not really being insured? As Aviva Aron-Dine, a senior fellow at the Center on Budget and Policy Priorities, points out, the Graham et al. plan wouldn't really be anything like "keeping" Obamacare, even for states that opted in:

“You can’t actually keep the same program if your federal funding is being cut by a third in 2026” [...] And even putting aside the cuts, she said, the block grant structure would fundamentally change the health-care landscape. “[Funding] is capped, so it wouldn’t go up and down with the economy,” when fewer or more people become eligible for subsidies.

But other than not breathing or moving, your taxidermied kittycat will be exactly like the Princess Fluffybum you knew and loved.

Yes, that's right: Not only do the block grants start with a 16% cut in 2020, they end altogether in 2027. That's not a healthcare system. It's an elimination of healthcare. Since the bill hasn't actually gone anywhere yet, there's no CBO score, but obviously, if the thing ends in a decade, that's going to be the functional equivalent of a straight repeal, so we're talking tens of millions of Americans losing health insurance, even in blue states that try to keep some form of exchanges.

This Goddamned Republican Obamacare Repeal Will Kill People. Time To Get Into The Streets.

Why are people so mad about the Senate Obamacare repeal? Because their lives depend on it.

Among other changes from the ACA, the individual and employer mandates to purchase health insurance would be eliminated, though states would be free to implement their own mandate in order to attempt to keep premiums from exploding. Funny, though, that works a hell of a lot better with a national insurance pool. Medicaid would become a block-grant program as well, capped by state population, and with ever-decreasing federal funding, which would inevitably kill people and make life for people with disabilities hell, too. It would do nothing to stabilize the individual marketplaces, and would almost certainly create so much uncertainty that many insurers would abandon the markets altogether.

And so on. It's really grim stuff; if you want to go get more depressed, also check out this helpful splainer at Vox for other details, since you are going to be calling your senators to let them know you think this thing is TERRIBLE. Stock up on a few talking points. Topher Spiro of the Center for American Progress has a fine overview in this Twitter thread, too.

Now, before you actually freak out and go looking for a General Electric M134 minigun and some belts of votes with which to face the zombie hordes, there's some good news, maybe, kind of: As The Hill notes, even with McCain (seriously, fuck him) supporting it, this abomination is so far not getting any traction with Mitch McConnell, who is no longer on speaking terms with Donald Trump, who of course supports it because it's an ACA repeal, please do not talk about details please. And then there's the weirdass Senate rules:

Republicans face a tight deadline of Sept. 30, when the fast-track process known as reconciliation needed to pass a repeal bill without Democratic votes expires.

Asked if he thinks the bill has legs before Sept. 30, McCain said, "I do."

"I think he's getting a number of governors who are supportive of his approach to weigh in," McCain said of Graham.

We certainly aren't stupid enough to be complacent about the prospects of ACA repeal rising once more from the toxic lake it was spawned from. We all need to light up senators' phones, folks. Let them know you want them to fix the ACA, not gut it. We can't let this fucking thing pass.

Oh, and John McCain? The cuts to healthcare for Arizona would come to over $1.5 billion in 2026, before the block grants vanish altogether. Shame on you.

Yr Wonkette is supported by reader donations. Please click the "Donate" linky to help. And get out of that fetal position. There's work to be done, right now.