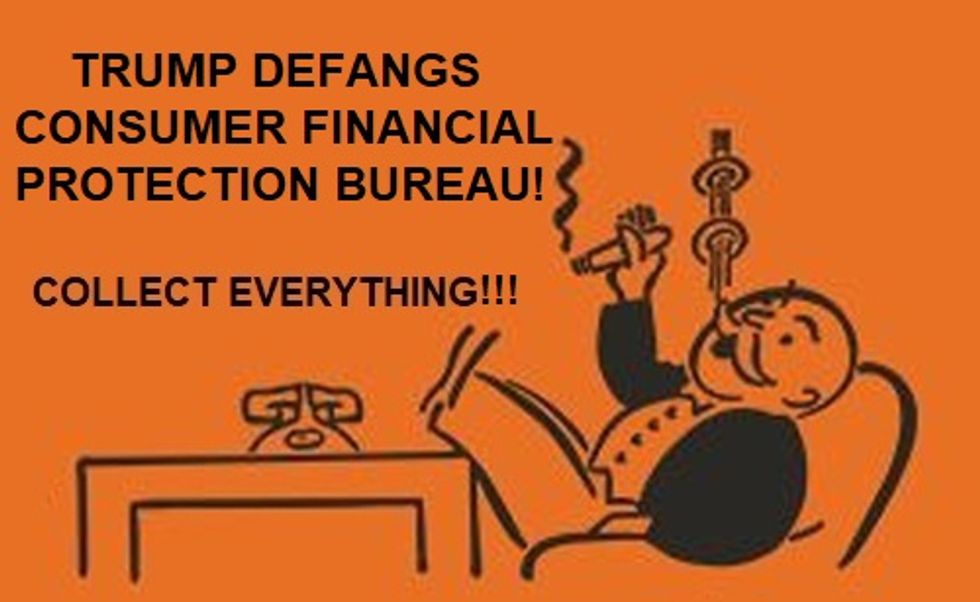 Richard Cordray, the head of the Consumer Financial Protection Bureau, announced today he'll be leaving his job at the end of the month. Cordray's term in the office was set to expire in July 2018, but his early departure will give Donald Trump a head start on that big fire sale he's been planning for the CFPB, which until now had been an agency with regulatory power over dishonest banks, payday loan outfits, and other financial institutions that screwed over ordinary Americans.

Oh, look, Republicans are screwing everyday Americans to help the big banks. Boy are we astonished.

Cordray's decision to get the hell out of Dodge comes as only a slight surprise, since the Republican Congress and administration have already been working hard to demolish the CFPB around him and other agency staffers who think consumers should be protected instead of exploited. Just last month, Congress passed a bill rescinding a CFPB rule that would have allowed class action lawsuits against financial institutions that screwed them over. Instead, consumers will continue to be forced into binding arbitration, in which banks and other companies nearly always win. Cordray had directly asked Donald Trump to veto the bill, but nahhh.

Now we can look forward to a lot more scams like Wells Fargo's scheme to create unwanted accounts (and monthly fees!) for customers who never wanted them, and there'll be no real watchdog to meddle in the holy mission of extracting as much money from consumers as possible.

In a message to CFPB employees, Cordray said it was "a joy of my life to have the opportunity to serve our country" as the agency's first director, and said -- in language surely inspired by a near-hallucinatory sense of optimism,

I trust that new leadership will see that value also and work to preserve it – perhaps in different ways than before, but desiring, as I have done, to serve in ways that benefit and strengthen our economy and our country.

Mr. Cordray may not have fully believed that, as he didn't add a warning to CFPB workers to keep an eye out for flying pigs.

Needless to say, Republicans are over the fucking moon, because now the economy will surely boom, or at least the revenues of their biggest donors in the banking industry will:

Within minutes of Cordray’s public announcement, one of the CFPB’s staunchest critics, Rep. Jeb Hensarling (R-Tex.), chairman of the House Financial Services Committee, cheered the move.

“We are long overdue for new leadership at the CFPB, a rogue agency that has done more to hurt consumers than help them,” said Hensarling, who has touted legislation that would strip the agency of many of its powers. “The extreme overregulation it imposes on our economy leads to higher costs and less access to financial products and services, particularly for Americans with lower and middle incomes.”

Translation: Get out the shears, boys, it's time to fleece the rubes!

WaPo's Renae Merle wrote, presumably with a perfectly straight face, this summation of Republicans' "frustrations" with the CFPB:

Republicans were particularly frustrated that the CFPB continued to issue new rules over the last year despite the Trump administration’s focus on loosening regulations to spur economic growth. Last month, for example, the agency finalized wide-ranging rules targeting the billions of dollars in fees collected by payday lenders offering high-cost, short-term loans. The rules would radically reshape the industry and even “restrict” the industry’s revenue by two-thirds, according to the CFPB.

Shame on that consumer protection agency, writing rules to "protect consumers" as if it were still Obama's America. Merle went on to quote Dennis Shaul, the head of the payday lending trade group "Community Financial Services Association of America," who said his crowd "didn’t always see eye-to-eye with Director Cordray and in particular with his actions, which turned the Bureau into a highly partisan agency." That would be "partisan" as in "not rolling over for fucking loan sharks like government is supposed to." Shaul had some hopes for a big fat Christmas present from Donald Trump, too:

The group hopes Trump will appoint a replacement who “will listen to customers rather than special interests,” he said.

Yes indeed, if there's anything consumers want, it's the chance to pay a 400% interest rate and never get out of debt. Expect the CFPB webpage that explains why payday loans are a terrible idea to kill itself shortly.

Elizabeth Warren, who crafted and drove the legislation that created the CFPB, pointed out that under Cordray's direction, the CFPB had done real good for consumers, and also offered a recommendation for what almost certainly won't happen:

With current Ohio Governor John Kasich term-limited, Cordray is rumored to be planning a run to replace Kasich in 2018, so that's actually good for one state. In the big picture, that may even be a net gain, since even if Cordray had stayed at CFPB, the Republican wrecking crew was determined to neuter it one way or another. He might as well seek a job where he can actually accomplish something instead of banging his head against a wall for another eight months.

No names of potential Trump nominees to replace Cordray have yet surfaced, although we suppose it's possible he could pardon Martin Shkreli and put him in the job.

If nothing else, here's one more goddamned reason to take back the House and the Senate next year. There's a lot of work to be done. As Barry always said, don't get mad, VOTE.

Yr Wonkette is supported by reader donations. Please click here to help us with all the day-drinking we need to get to.