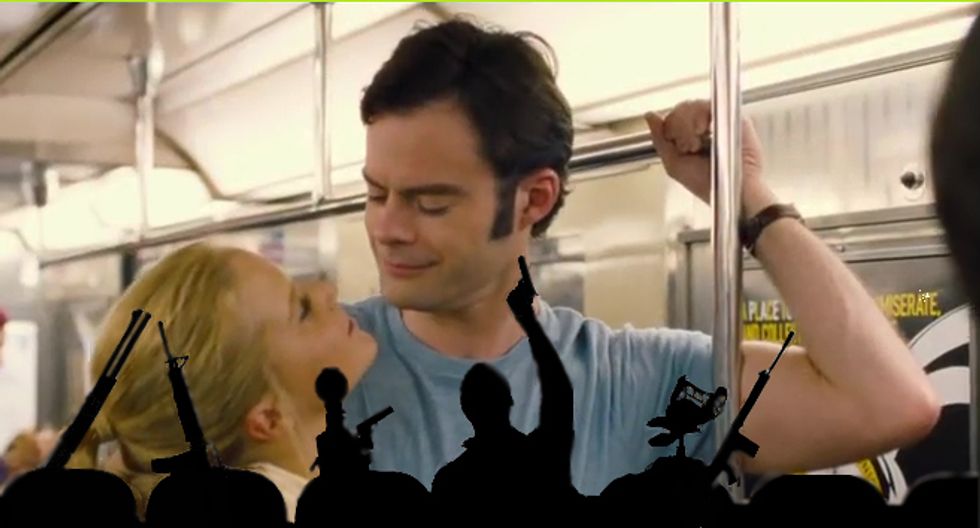 Former Texas Gov. Rick Perry knows there's no problem that can't be solved by the addition of more guns, which is why he claimed Sunday that last week's shooting in a movie theater in Lafayette, Louisiana, probably could have been prevented if only a whole bunch of people in the audience had been armed. Because in the confusion and panic of a dark movie theater, five or six extra people with guns would certainly have been a big improvement.

Perry explained his Marksmanship Is Magic policy to CNN's Jake Tapper on Sunday:

These concepts of gun-free zones are a bad idea. I think that you allow the citizens of this country -- who have been appropriately trained, appropriately backgrounded, know how to handle and use firearms -- to carry them ... I believe that, with all my heart, that if you have the citizens who are well trained, and particularly in these places that are considered to be gun-free zones, that we can stop that type of activity, or stop it before there's as many people that are impacted as what we saw in Lafayette.

That seems entirely reasonable, and it would have worked just great in Lafayette, where the shooter chose a seat in the back row of the theater, and the entire rampage -- including the gunman's attempt to leave the theater, and his suicide when he saw police approaching -- was over in a few minutes, according to police. There is absolutely no way that four or five or six additional people with guns could have shot each other instead of the actual bad guy, especially not in a dark theater where it wasn't clear where the shots were coming from. After all, in movies, nobody ever shoots the wrong person by mistake. Also, please disregard "active shooter" training simulations where participants end up "shooting" the instructor or each other half the time. People would do better in real life.

Or maybe it's worth considering that during the 2011 Tucson shooting that killed 6 and wounded 13, including Gabby Giffords, an armed citizen on the scene drew his pistol and held it on a man holding a gun -- and almost shot the person who had disarmed Jared Loughner and was holding his weapon.

And heaven knows there's no need for any additional gun control laws, said Perry; what we really need to do is enforce the ones we have, so that crazy drifters don't get guns.

And immediately after we say that, we also need to completely ignore the sad reality than any attempts to strengthen enforcement of existing laws results in screams of outrage from the NRA, which doesn't want any measures that would result in even the slightest inconvenience for gun purchasers. Consider the firing of that gun magazine editor for daring to suggest that requiring a brief gun safety class would be a good idea. Or the Texas Open Carry moron who's very very sad that the state's new open carry law still excludes him, just because he has a criminal record.

So to sum up: More guns equal safety, especially when nobody has any idea what they're shooting at, and we simply need to enforce the laws that are on the books, unless the NRA complains.