Rick Perry Might Go To A Gay Wedding, But Would He F*ck A Groomsman? 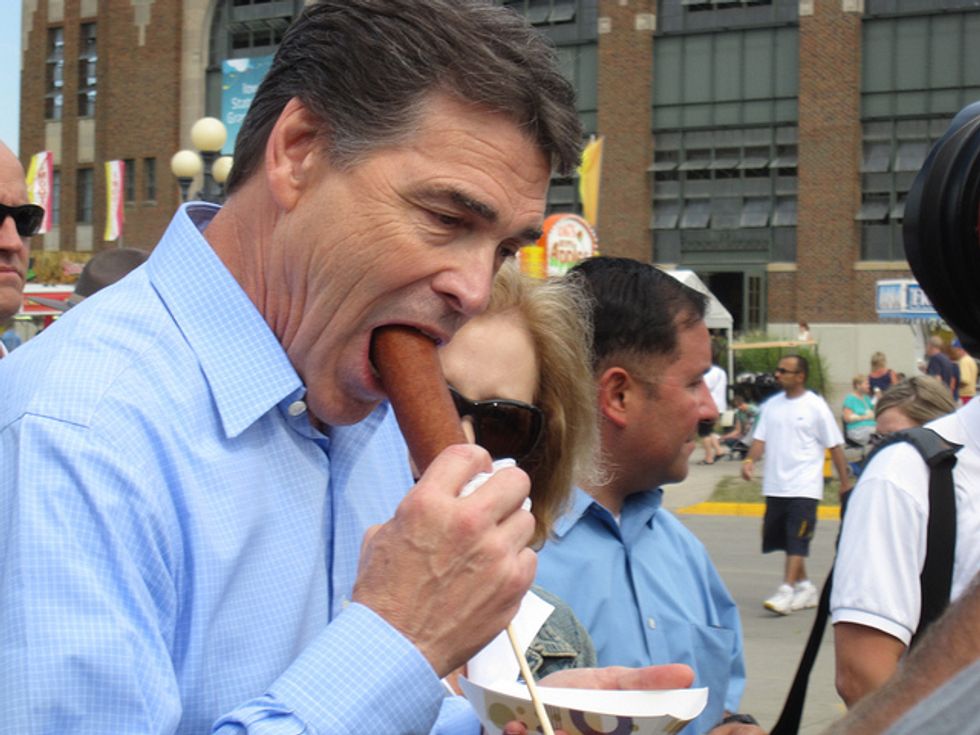 Former Texas Gov. Rick Perry was asked everyone's new favorite question Tuesday afternoon. It was on the wingnut Hugh Hewitt's radio programme, and in response to the question, "Would you attend a gay wedding?" Perry was all:

I probably would, but I think the real issue here is that’s the ‘gotcha’ question that the left tries to get out there.

And then he changed the subject because Perry wants to talk about jobs and defense and NOT GAY STUFF. Hewitt admitted that he's "part of the problem," because he asks ALL the Republicans that question, but honestly, Hewitt is not the only one, because the rest of the media, on all sides of the spectrum, is asking all the GOP candidates that question.

So is this a stupid "gotcha" question? NO. Is it a "funny" question? We laugh every time! Ready for Wonkette Think Piece Time? LET'S GO!

Mirror Mirror On The Wall, Who Hates Faggots Most Of All?

Every cretinous passenger in the 2016 GOP clown hearse is trying SO HARD to prove that they are the most gay-hating-est of them all, not because Republican voters in the general election are necessarily all like that, but because the Republican primary voters basically think like ISIS on the subject, though we grant that the primary voters have better manners and slightly better hair.

On Friday, the American Family Association's loudest hate-squealer Bryan Fischer spent time on his show advising his listeners that IF they are being pressured to go to a gay wedding, they should send the gay couple a nice letter explaining that they are bigots and that they most certainly do NOT give their blessing. Then and only then are they allowed to go, and they are most certainly not allowed to eat any gay cake! According to Right Wing Watch, one of his listeners, "Ricky," was so upset about Bryan Fischer's godless liberal advice that he called in to Tony Perkins's Washington Watch programme, to rant and rave about it:

Settle down, Ricky, no gay couple would EVER invite your Sad Ass to be present on the best day of their lives. But people like Ricky make up a good portion of the Republican base! All Republican GOP candidates say they're against marriage equality, but the base has been betrayed before. Even Gee Dubya Bush, who was surrounded by gay staffers, betrayed them, by giving them a lot of lip service and really, on balance, not too much red meat action toward their goal of fully de-gaying America.  This is why they're asking the question. In essence, they're saying, "Okay, you're against gay marriage, but HOW HARD are you against it?" (Insert famous The Office joke here.)

If Republican presidential candidates are willing to go to a gay wedding, that means they, in their heart of hearts, do not give a fuck, at least not enough to be President Of The Gay-Bashin' Jesus Horde. Possible GOP candidate Ohio Gov. John Kasich is totally going to a gay wedding. Marco Rubio said he would, if he loved the gay person enough. Wisconsin Gov. Scott Walker went to a gay RECEPTION for a cousin (probably had so much pizza), but skipped the ceremony. Is he pandering, trying to split the difference between bigotry and human decency? Well, NOW he is, how convenient! But oops, sorry, the New York Times reports that he was off doing important governor business during the ceremony.

The motivations for The Question are also why, as we discussed Monday, a wingnut group by the name of the American Renewal Project is going full balls-out McCarthy, investigating all the GOP candidates for possible gay infiltration of their inner circles, people who might make the candidates a little soft on these issues. On some level, the anti-gay wingnuts know that there are very few people in America who are really WITH them, and they don't like it.

But Oh, How The GOP Wishes People Would Just Stop ASKING!

The Supreme Court is set to truly, madly and deeply cram gay marriage down the throats of every American citizen in June. The GOP establishment knows this, and they just want the issue to go the fuck away and go to hell and also die. David Koch, who, together with his brother makes up the boy band known as The Koch Brothers, and will help finance a lot of the election on the GOP side, supports gay marriage for God's sake. The GOP money people want to change the subject SOOOO BAD, which is probably why candidates like Perry are like "uh, whatever, but can we talk about [insert Republican pet issue here] instead?" This is part of why we find the question funny. Ha ha, motherfuckers, you DEAL with that frothing crazy base that you created!

We also find the question interesting, and also amusing, for one other reason. Aside from Rick Santorum, who lives inside of a giant fetus and never comes out unless he's going on the television, we're fairly certain that every single person who wants to be The One to lose the presidency to Hillary Clinton probably has gay staffers, gay family members, quisling gay Republican donors who hate themselves, et cetera. (Santorum, for the record, WILL NOT GO to a gay wedding, so take him off your invite list right now.) Back in 2004, when Dubya called for a Federal Marriage Amendment in his campaign platform, his gay staffers had to grin and bear it, because marriage equality support was not the mainstream position yet, it was legal in ONE state, and it wasn't federally recognized. Now, tons of Republicans support it, alongside the great majority of the country. Also, it's legal in 39 states now, bitches, soon to be 50, and that's happening LONG before any of these assclowns will see the inside of the Oval Office (because President Hillary was nice enough to invite them over, of course). It's not an abstract question anymore. In fact, it's kind of personal! Ted Cruz told Hugh Hewitt that he's never been invited to a gay wedding before. But he probably will be one day! WHAT WILL HE DO THEN?

In Summary, And In Conclusion, Also, Too

So, on balance: Gotcha question? Haha sure, we guess, if you want to call it that. I mean, it's no "Hey Sarah Palin, are you able to read newspapers by yourself?" Which means we can't hope for any sort of hilarious "ALL OF THEM KATIE" sound bite. But it's definitely interesting, and super hilarious to watch wingnuts RAGE over it.

But seriously, back to the original question. Would Rick Perry f*ck a groomsman, at a gay wedding? GET ON IT, MEDIA. Ask the other candidates too. It's time to see exactly where these dudes' loyalties lie.