Rick Perry Remembers All Three Of His Points, Totally Ready To Be President Now 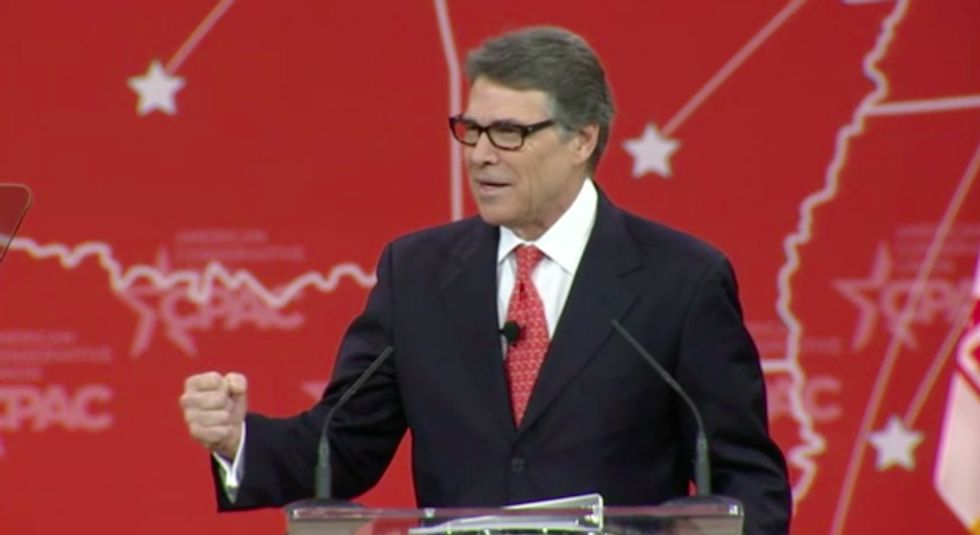 Another day at the derpapalooza that is the Conservative Political Action Conference, and Rick Perry did A Accomplishment, y'all! He walked out on that stage Friday morning, declared "On three points, we must be clear," and proceeded to read ALL THREE POINTS from the TelePrompter without saying "oops!" even once. Suck it, you other Republicans running for president in 2016! You're not dealing with the 2012 candidate hopped up on pain pills anymore. This is the new and improved lean, mean, INDICTED glasses-wearing machine who is ready to kick some ass and take some names in the next Republican presidential primary. Yee haw!

First point Rick Perry totally did not mess up:

This administration’s incompetence in Iraq and Syria has allowed the emergence of ISIS.

Yeah, yeah, we know -- that sentence is part of every speech at CPAC this year. Barack Obama personally created ISIS when he prematurely stood under a MISSION ACCOMPLISHED! banner and declared major combat in Iraq had ended, disbanded the Iraqi army, and sent them all home with their guns. Or something like that.

Here is another point Rick Perry wants to make, although it's not officially one of his three points, it's more like point 1(A)(II)(d)(iv), or something:

Israel has the right to exist as a Jewish state. Amen.

Perry's really been trying to fuck that kosher chicken, because like many of his conservative brethren, he thinks if he says "Israel" enough, all the American Jews will vote for him even though American Jews are overwhelmingly liberal Democrats, Israel is not the top priority when American Jews cast their votes, and American Jews really really hate Bible-humping politicians who are constantly jerking off in public about Jesus and what a good Christian nation we used to be before liberals murdered Christmas, except for when it's convenient to say A Thing About Judeo-Christian Jews, like how they were the original tea partiers.

On to Rick Perry's Official Second Point that he totally did not mess up:

Here’s the second point, and I want to be very clear today: The conservative movement must be a great agent of reform. To lead this country we must offer a vision of change.

How we gonna do that, Rick?

It is time, it is time to restore hope and opportunity to the middle class Americans out there, and we can start with our tax code. We’ve got the highest corporate tax rate in the western world.

Wow, he's practically an Elizabeth Warren populist! We will save the middle class by cutting corporate taxes, because lord, hasn't General Electric been Taxed Enough Already?

And now for the big moment.

Here’s the third point: I’ve never been more certain than I am today that America’s best days remain in front of us.

He did it! He said the third thing! Success! He is really going places now. Like the Catskills maybe:

We’ve survived worse. We had a civil war in this country. We had two world wars. We had a great depression. We even had Jimmy Carter. We will survive the Obama years too.

Ha ha, counting all the way to three and telling jokes! Watch out, White House, Rick Perry is comin' right for ya.