Rick Perry Won't Meet With That Obama Varmint, Unless'n He Does 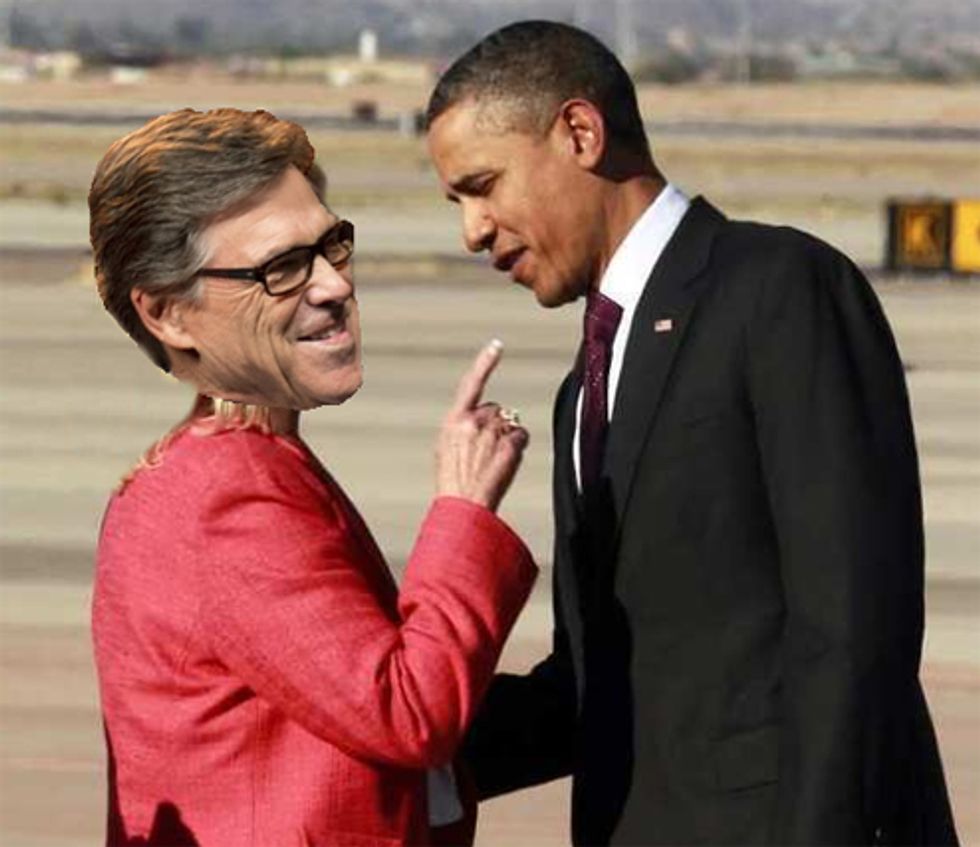 Well, the Daily Caller is here to make some happy in its pants about how a REAL MAN governs a state: with his finger in the "president's" face while hootin' and hollerin' about how he ain't gonna meet no varmints, no sir. Unless, after all the puffin' and blowin', well, unless he does.

Reading the Daily Caller's breathless, heaving romance novel about the dustup -- from our old pal Patrick Howley, who is no stranger to breathless, heaving sexxxiness -- you would be forgiven for assuming, based on the pre-come Howley oozed all over your screen, that Rick Perry is being a total fucking asshole:

Then there's a bunch of stuff about the IRS, and Obama being a race hustler (because Daily Caller) and this weird thing?

Even in the earliest days of this administration, the media didn’t report the truth about how the White House was telling Americans to report on their anti-Obamacare neighbors and send secret reports on their fellow citizens to flag@whitehouse.gov.

Lolwhut? Anyhoo, so you figger Rick Perry's just being a total cock right?

“I appreciate the offer to greet you at Austin-Bergstrom Airport, but a quick handshake on the tarmac will not allow for a thoughtful discussion regarding the humanitarian and national security crises enveloping the Rio Grande Valley in South Texas,” Mr. Perry wrote in a letter to the president Monday. “I would instead offer to meet with you at any time during your visit to Texas for a substantive meeting to discuss this critical issue.”

Oh. Well that seems kind of fair actually. You're THERE ANYWAY, BAMZ, don't be that guy who's just doing fundraisers, for fuck's sake, OPTICS.

And that's why Barack Obama and Rick Perry are meeting on Wednesday, per NBC, so we guess Patrick Howley's peener and scrot can retract again inside his belly, where they belong.