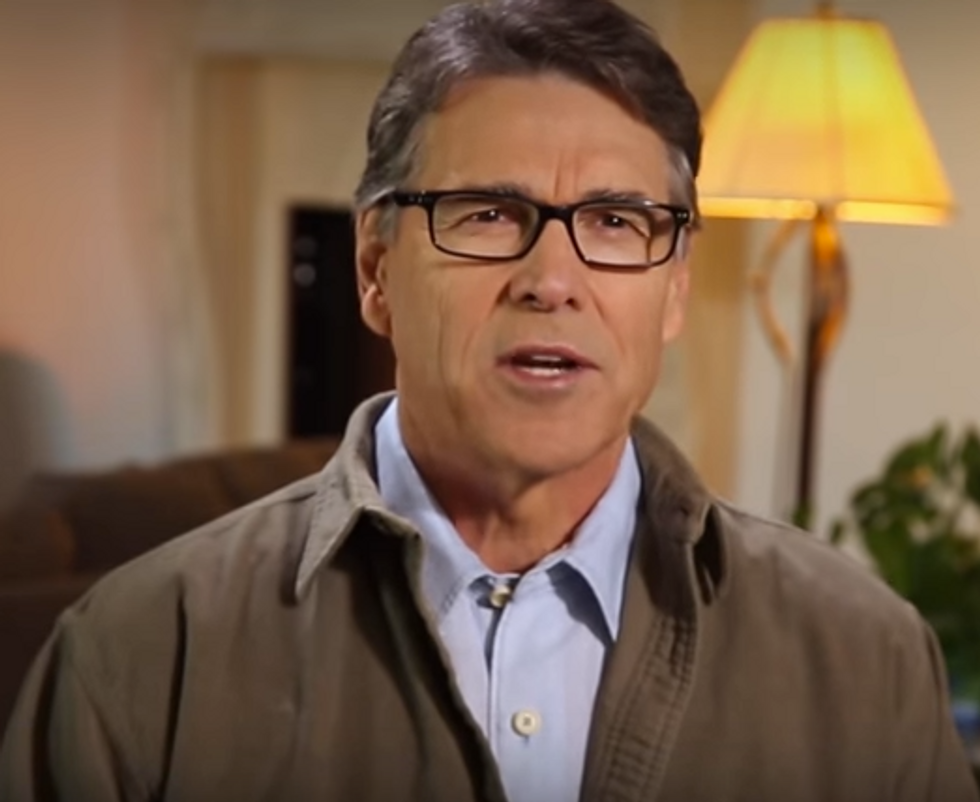 Maybe those glasses are helping. Or maybe he's one of thosebroken clocks.

Lots of people on the interwebs are making fun of poor dumb Energy Secretary Rick Perry today because he said something that sounded really stupid, suggesting that increased use of fossil fuels could dramatically cut sexual assault in the developing world. While Perry is A Idiot, that's mostly because he thinks fossil fuels are the only true way to power economic development. As a Republican from Texas, he was required to sign over ownership of his pecker and his cerebral cortex to the oil and gas industry, after all.

Perry said today's dumb thing at a Washington event sponsored by -- of course -- the American Petroleum institute and moderated by NBC's walking equivocation machine Chuck Todd and Axios founder Jim VandeHei. Interrupted by protesters who attacked his love of coal and oil, Perry shot back with a Telling Anecdote about how fossil fuels make life better for everyone:

So that's one hell of a stretch, getting from fossil fuels to preventing sexual assaults, which seem not to have vanished from the fully electrified US America or Europe. There's a certain intuitive logic in claiming that street lighting will reduce crime in general -- including sexual assault -- although some research even casts doubt on the commonsense idea that well-lit streets = safer streets. The research on how effective the light of righteousness is at preventing sexual assault is even murkier. Like Rick Perry's logic.

But wait! Maybe Perry is on to something! After all, there's this charity, the American Relief Agency for the Horn of Africa (ARAHA), that's raising funds for small solar lighting units with pretty much the same appeal:

Solar lights offer a dignified solution to improving the safety of home life for families not connected to electricity. These lights are especially important for the protection of women and children against the ever-present threat of rape, assault, or other forms of gender-based violence. Providing a reliable source of light has been shown to dramatically reduce rates of gender-based violence, an outcome ARAHA rigorously pursues through its solar light program

There's commonsense logic to the idea that light might reduce crimes against women; we rather wish AHARA had included a link to a study to back that up. But Perry's missing the bigger point in his propagandizing for coal and oil development anyway, because while they definitely generate electricity, there's no reason to treat them as the only, or even the best, solution to the needs of the developing world.

Not incidentally: The Pentagon considers climate change a security threat that will lead to conflicts over scarce resources, mass migrations, and civil wars. Dumping more carbon into the air ultimately won't reduce sexual assaults, which always skyrocket during wartime and refugee crises.

Let's go back to the little girl who wants to study by the light of a nice bright electric light instead of having to breathe fumes from a fire or a kerosene lamp -- and let's make it an LED, too, just to piss off Perry. Why the hell does that little girl's village need all the costly infrastructure of coal mines or oil wells, plus generating stations, plus miles and miles of transmission line, to bring her that light? The really hot trend in Africa right now -- for American and African entrepreneurs -- is small, local solar development, where a few panels and a local microgrid are enough to provide power for a whole village at far lower infrastructure cost to the villagers. Cleaner energy, more affordable, and more local autonomy, hurrah!

There are all sorts of competing ideas for clean generation of light for individual homes, like this nifty startup, GravityLight, that aims to replace dirty kerosene lamps in Kenya with lights powered by small generators that run off a descending weight, like a modern version of a weight-wound clock, minus the springs:

Of course, there is one big, big downside to developing local microgrids that are independent of big power companies and polluting energy sources: They take away a market for the producers of dirty energy, not only the big oil companies that own Rick Perry's brain and pecker, but also the corrupt petroregimes that run far too many African countries with the help of their American oil company partners. Obviously, if local communities give electric Power to the People, those people might start getting funny dangerous ideas about other kinds of autonomy, too, and then how the hell will we sell their rulers big generators, pipeline contracts, or American weapons systems?

Wonkette depends on your love to keep us lit. We also partner with Arcadia Energy, which gives us a nice signing bonus for every Wonkette supporter who joins their wind energy program and/or their solar energy program — pay your home energy bill with green energy, regardless of where you live!