Rick Scott Is Just Like Mother Teresa: Your Florida Roundup 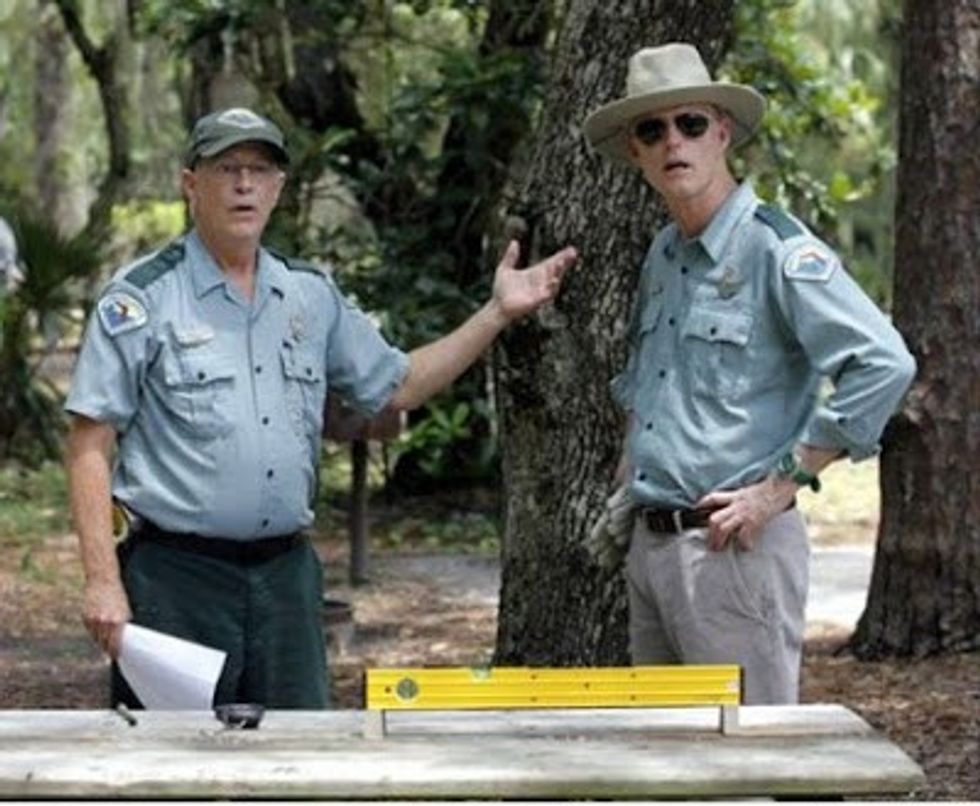 We were worried for a moment there that after last week’s absolute and undeniable perfection, Yr Florida Roundup would have nowhere to go but down. And this turned out to be true, sorry. But we do have this wonderful picture of our dear pre-zombie governor for your edification and amusement, so yay?

Oh yes, Rick Scott, who has opened state parks to cattle ranchers, slashed the state’s environmental enforcement to the bone, and forbid state officials from even mouthing the words “climate change,” an utterance which angers the Good Lord (by which we mean the Kochs). Could you think of any better candidate for a Friend of the Environment award?

You can? Well, shit.

Gov. Rick Scott, whose administration has pushed to open the parks to cattle grazing and timber harvesting, offered polluters ways to get out of fines and sharply cut back staffing and regulations designed to protect Florida's natural resources, is getting an award for being a friend to the environment.

The award, announced via email last week, is being given to Scott later this year by the Fish and Wildlife Foundation of Florida, which functions as a support group for the state's Fish and Wildlife Conservation Commission, which is run by gubernatorial appointees.

The Sierra Club's Frank Jackalone reacted to the news of Scott's award with laughter.

"No one in their right mind would give Rick Scott an award for protecting wildlife," he said.

This is Florida, dude. No one’s in their right mind. Also, junior high school could not have been an easy time for Frank Jackalone.

And how do these award-givers explain their decision? Like so:

"We are very apolitical," Boston said. He acknowledged Scott might be a controversial pick for the award, but said other selections might be too.

The event is scheduled to be held on a ranch owned by state wildlife Commissioner Ron "Alligator" Bergeron, a developer, paving contractor and rodeo champion who nearly lost several fingers wrestling an alligator.

Well, It Could Have Worked

Speaking of guys who nearly lost fingers, let’s suppose you’d been arrested and knew you had some felony warrants. You were carrying a fake ID, so the cops didn’t know your real name yet — but they would as soon as they ran your prints. Huh. What do you do, Florida Man?

A Florida man attempted to chew off his fingerprints while in a patrol car to avoid being identified by the police.

On Thursday, Lee County Sheriff detectives noticed a 2015 Mercedes that had been reported stolen and after stopping the vehicle, they found the driver, Kenzo Roberts, was using a fake ID, had a concealed firearm and possessed three fraudulent credit cards.

Surveillance video shows Roberts unsuccessfully trying to bite off his own fingerprints while in the backseat of the patrol car. Lee County Sheriff officials say Roberts has two felony warrants for his arrest for aggravated assault with a deadly weapon.

Oh, Florida. We can’t even do decapitations good.

A Florida man is under arrest after he attempted to decapitate a 59-year-old man, but failed.

According to the Orlando Sentinel, Sadekie McDonald was arrested on Monday after police said he attempted to decapitate a 59-year-old Orlando man. However, the machete broke after the first swing, Orange County deputies told the Sentinel.

Sad commentary on the quality of today's machete manufacturing, isn't it? Is there more? Yes, there’s more.

Authorities said that McDonald stated that he wanted to “play soccer with his head” before the man got away following the machete breaking after the first swing. […] After the machete broke, police said McDonald began to punch the victim in the head and smashed the windows and windshields of the vehicles in the driveway. Police arrived to find McDonald in the front yard with the three smashed vehicles.

They added that McDonald was saying, “You’re here for me” and “Cuff me nicely.”

In fairness, though, our man McDonald did have a legitimately not-terrible reason (ALLEGEDLY!) for the blade slashing, and it had nothing to do with Jihad.

WFTV reported that McDonald told police that he was touched inappropriately as a child by the victim when he dated his mom.

From the Aggravated Assault Desk

A woman accused of bashing a man with a meat tenderizer and a broomstick got locked up on a felony charge, according to an affidavit and a police report.

Accused kitchen utensil wielder Tiffany Kearns, 50, was jailed July 4 on an aggravated battery charge following the incident. Fort Pierce police about 2:45 a.m. went to an address in the 300 block of North 11th Street. Kearns said a 54-year-old man was staying in her home and she wanted him gone.

Because its readers have the collective IQ of a wet fart — or in an attempt to be cheeky, whatever — this publication decided it needed to explain a few things:

Typically not employed as an offensive weapon, a meat tenderizer is a culinary tool used to strike or pound on meat to make it more tender before cooking.

A meat tenderizer “is useful when preparing particularly tough cuts of steak, and works well when broiling or frying the meat. It is also used to ‘pound out’ dishes such as chicken fried steak or schnitzel to be wider and thinner,” according to a Wikipedia entry.

Brooms, on the other hand, are ridden by witches and used with dust pans when sweeping.

Did you think this was the only assault with a deadly broom in Florida this week? How wrong you were.

A 74-year-old man was arrested by Volusia County sheriff's deputies after they said he struck his 100-year-old mother with a broom and threatened to kill her, an arrest report states. […] The centenarian said she had entered her son's bedroom to feed his cat. When her son walked in and saw his mother, he began yelling, the report states. At one point, David Corning said to his mother, "Go back inside you (expletive deleted) or I will kill you," the report states.

He then grabbed a broom and swung it at his mother, hitting her on the side of the head and breaking her glasses, deputies reported.

His defense, it turns out, is that the old bag is nuts.

David Corning told deputies that his mother should be taken into custody under the Baker Act and that he hit her accidentally with the handle of a vacuum cleaner while she was sitting on a chair in his bedroom.

That’s all for this week, Florida. Perhaps next week we shall return to our regular quota of insanity. Not even Florida can pull it off it 52 weeks a year.