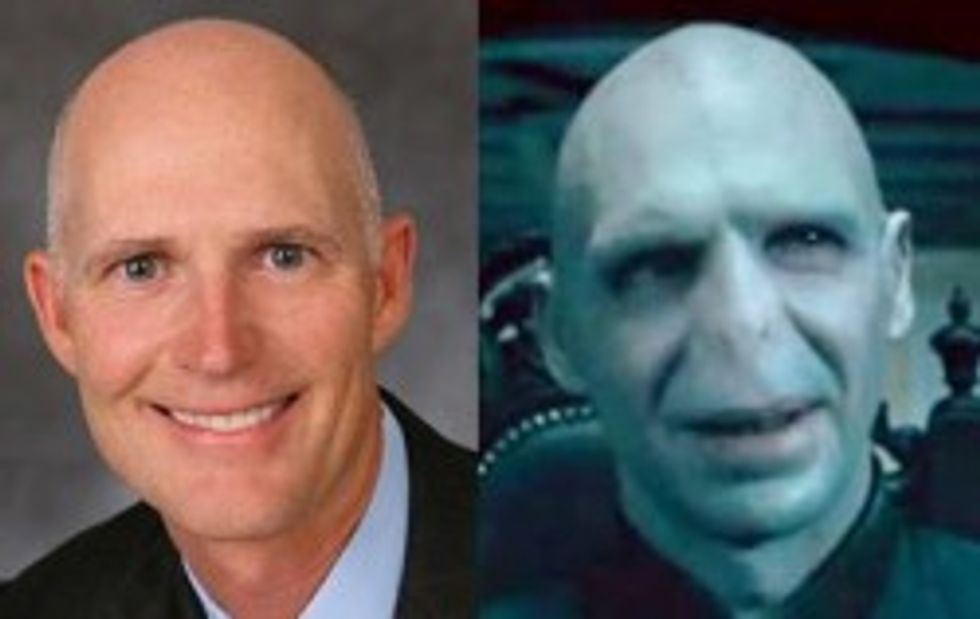 Currently one of themost unpopular governors in the country, Florida Gov. Rick Scott is struggling to figure out how to convince Florida voters that he is not a total loser (which will fail, because he is). Here is Rick Scott's super-sophisticated bazillion-dollar genius public relations attack plan: he will ask his few remaining supporters to log onto his website and click the "send" button on a form email a few thousand times in order to spam the state's newspaper editors with "letters to the editor" declaring eternal love without condoms for Rick Scott. Despite the fact that he has never read a newspaper in his life, Rick Scott is confident that he can at least Win the Op-Ed Section with all these votes.

Here is your love letter for Rick Scott:

Dear Editor,
When Rick Scott ran for Governor he promised to create jobs and turn our economy around. I voted for Rick because he’s always been a businessman, not a politician. While politicians usually disappoint us and rarely keep their promises, Rick is refreshing because he’s keeping his word. His policies are helping to attract businesses to our state and get people back to work. Some of the special interests are attacking the Governor for making tough decisions, showing leadership, and doing what he told us he would do. Rick Scott deserves our unwavering and enthusiastic support. How can we expect to elect leaders who will keep their word and do what’s right for our state if we don’t stand up for those with the courage to set priorities, make difficult choices, and actually deliver on their promises made?

He is "refreshing!" Maybe if a newspaper editor receives forty of these, he or she will finally decide to print all of them. That's how these things work, right? [Rick Scott For Florida via Orlando Sentinel]
Kirsten B. Johnson