Rightwing Reads NYT Headline, Declares Bush Was Right About Everything 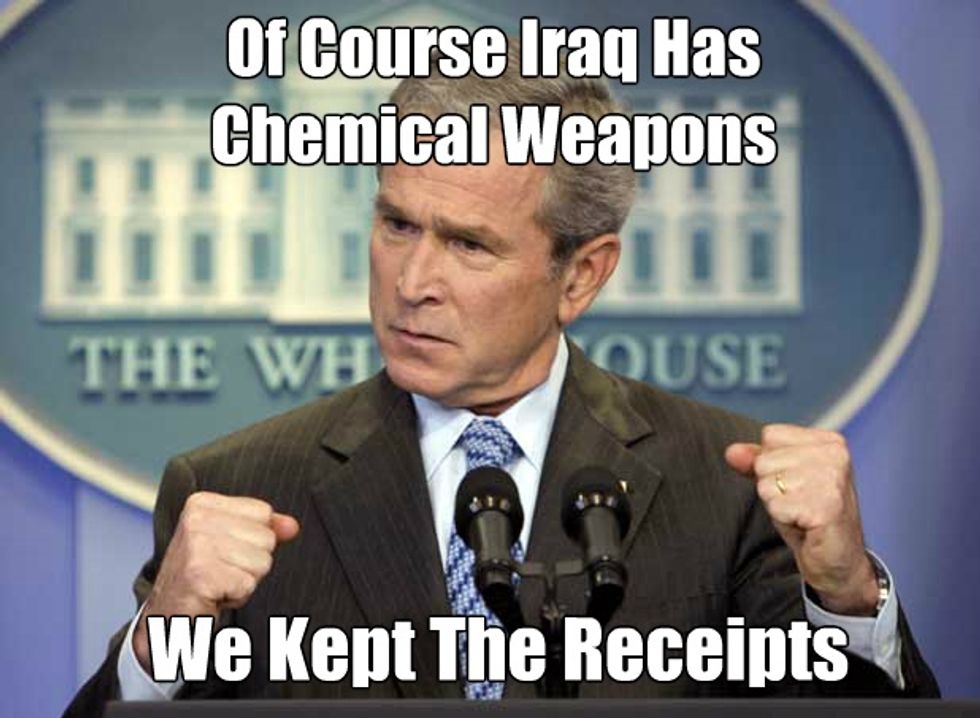 As we noted Wednesday, the New York Times has discovered that, after invading Iraq to keep Saddam Hussein from killing everybody with his huge Weapons of Mass Destruction program, which definitely included an ongoing program of building new chemical and nuclear weapons, the Bush administration did everything it could do to cover up the actual chemical weapons -- relics from the Iran-Iraq war -- that they did find.

Obviously, the take-away for a lot of rightwing bloggers is easy: Suck it, liberals, Bush was right about WMDs in Iraq! Which kind of ignores the obvious question: If George Bush was so totally vindicated by the discovery of some old chemical weapons in Iraq, why is it that we're only learning about it 10 years later? Where was the great big "Mission Accomplished" banner for that one?

As a case study of how wingnuts are spinning the five or so paragraphs they actually read of C.J. Chivers's story in the Times, let us examine this piece from the still-toxic remnants of the New York Sun, which explains that the Times story is, in reality, "best viewed as journalism’s longest correction," because obviously the paper got it so thoroughly wrong with "all these charges about how President George W. Bush and his camarilla lied about the danger of Saddam’s chemical arsenal." That's apparently a set of now-disproven charges that President George W. Bush and his camarilla were also party to, seeing as how Bush himself made those high-larious jokes about the WMDS he couldn't find.

Not that Bush -- or more likely, Sith Lord Cheney -- isn't above coming forward in the next few days and also retroactively crowing that they were absolutely right, and that those rusty 155 mm shells and leaky rockets were definitely the droids we were looking for.

Just to review, Chivers's piece is not primarily about whether Bush Was Right anyway, although he's quite clear that one of the main reasons for the cover-up was that the administration didn't want to publicize the nature of the chemical weapons that U.S. forces unearthed -- literally -- in Iraq. They were old, often inoperable leftovers from the Iran-Iraq war, not a one of them newer than 1991, and most of them were weapons of U.S. design and European manufacture. The mobile chemical weapons labs and nuclear programs that Bush told us were definitely the reason to invade simply were not there, and so the existence of the old but often still-lethal relics was hushed up -- often at the cost of poor medical treatment for injuries to the soldiers who found them and blew them up as part of the effort to dispose of conventional explosives.

Even the Pentagon was invested in the narrative that if there was no active chemical weapons program in Iraq, there simply were no chemical weapons, and therefore there was no need to warn ordnance disposal teams that they might come across the things, or to prepare medical teams to treat them. In some cases, soldiers were denied Purple Hearts for their injuries because the Pentagon didn't consider mustard-gas burns incurred in digging up Saddam's obsolete stockpiles as combat-related injuries.

Ah, but on the right, here's the executive summary of Chivers's exposé, again from that New York Sun piece. What the Times was really saying was:

“Dang, we’re angry at Mr. Bush for failing to tell us we found the weapons that he had warned were there and that the Times insisted weren’t.”

To cover its own bumbling of the story, the Times tries to blame Mr. Bush for the fact that a number of our heroic GIs were injured by poison from the weapons the Times had claimed were a fiction.

Never mind that they were injured because the military was not warning them or their medics about the danger. Or that we never heard Bush crowing about being right, surely the greatest act of self-denial in his presidency.

Also, seeing this story as a vindication of the Chickenhawk War also misses another point: If we went to war in Iraq to get rid of these pre-1991 chemical weapons -- a claim that the Pentagon already refuted in 2006 -- why did the military do such a piss-poor job of destroying Saddam's old chemical weapons? For instance, somewhere during the nine-year occupation of Iraq, maybe we should have done something about the stockpile at Al Muthanna, which we knew was

the site where the UN ordered Saddam Hussein to dispose of his declared chemical munitions in the first place. Those weapons that could not safely be destroyed were sealed and left to decay on their own, which they did. The site was neither “active” nor “clandestine” – it was a declared munitions dump being used to hold the corroded weapons which Western powers themselves had in most cases helped Saddam procure.

You might think, if that was really our Golden Purpose for invading Iraq, that complex might have been addressed. Instead, we ignored it because the mission shifted to fighting the insurgency that resulted from our stupid invasion, and which evolved into ISIS, which now has taken possession of the Al Muthanna site. The chemical weapons there aren't especially good as WMDs, but in the hands of those sadistic assholes, they certainly can do terrible things as IEDs and in small-scale attacks. Let's blame Obama, OK?

To summarize: We didn't find the massive WMD program the war was meant to destroy, but we found some chemical weapons, like a SWAT raid that was supposed to bust a heroin ring but instead killed a family's dog and arrested a teenager for his pot stash. So let us be glad: Bush was right, and the Times owes him an apology and should probably reinstate Judith Miller as their chief foreign correspondent -- yes, the NY Sun calls for that, too.

Maybe George W. Bush should also apologize to himself for all those times he said that we found no chemical weapons because of flawed pre-war intelligence. Obviously, he was much smarter than even he gave himself credit for.