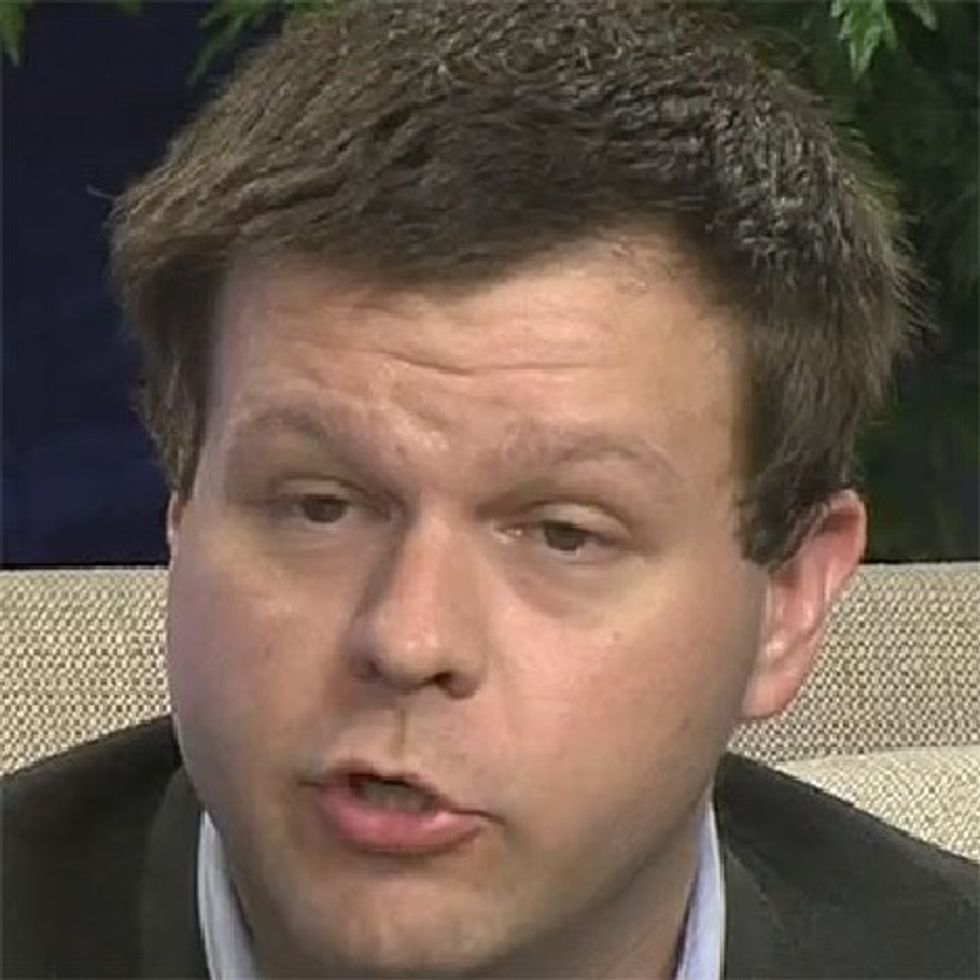 Always nice to start off the week with an entry for the "We Completely Believe This" file: rightwing bloviator and former head of the South Carolina GOP Todd Kincannon was accused of threatening his wife and forcibly refusing to let her get out of his car last Thursday, but don't worry, there was no arrest in the incident and Todd Kincannon is no spouse abuser -- he was simply in the throes of an intense allergic reaction to some cough medicine, he says. We're pretty certain that still leaves no excuse for the rest of his career as a flaming rightwing poopbag.

A Lexington County Sheriff's deputy responded to a report of a "possible domestic incident" at Kincannon's home in Columbia, South Carolina late Thursday. Kincannon told the deputy that while he and his wife had had a little tiff about his "touching her leg at a work function," according to the deputy's report, although Kincannon insisted there'd been no "physical altercation."

When the deputy interviewed Kincannon's wife, Ashely Griffith, he got a somewhat more detailed story. She told the deputy that the couple has a "history of unreported domestic violence" and that she was "extremely fearful" of her husband, whom she described as “extremely ‘traditional’ and controlling," which led him to overreact when she had supposedly embarrassed him at the work function -- what with the not wanting to have her leg groped in public and all, said wifely leg being Mr. K's husbandly property according to the Bible, we suppose.

After leaving, things got worse, according to the report, which refers to Kincannon as "James" since his full name is James John Todd Kincannon Jingleheimer DeSade Arbuckle Hitler. On the way home, Kincannon reportedly screamed at her; she asked him to stop the car and let her out, but he refused. At some point, Kincannon pulled into a Chick-fil-A parking lot, presumably because that restaurant chain just naturally makes straight people's marriages all better. The magic apparently didn't take, because she attempted to bolt from the car, but "James grabbed Ashely’s arm, squeezing it tightly, thus preventing her from exiting the vehicle," after which she reportedly hit him several times trying to get him to let go. The marriage-healing aura of Chick-fil-A having unaccountably failed, Kincannon hit the gas and headed home. The report continues:

Ashley continued to tell me she called her mother for help and attempted to call 9-1-1 with an open line in order for the dispatcher to hear James. While driving, James saw a police vehicle and ‘freaked out.’ James threatened he would drive the car into a concrete barrier if the cops became involved. In addition, James also threatened to kill himself if Ashely left. Ashely continued to tell me James has made several threats in the past to kill himself, her, and her family. Furthermore, Ashely said she has past incidents of domestic violence and threats of homicide/suicide recorded. I saw no visible injuries to Ashely, she provided me with a written statement, and was issued a victim’s pamphlet. It should be noted Ashely was trembling as she wrote her statement.

We're not sure we agree with you a hundred percent on your police work, there, Deputy. You gave the lady a pamphlet? Jesus toad-licking Christ on a Hoverround, that doesn't sound adequate to us, although South Carolina's law on mandatory arrest in domestic violence cases appears to only require an arrest if "physical manifestations of injury to the alleged victim are present and the officer has probable cause to believe" that domestic violence has been committed.

Kincannon insisted that there had been no arm-grabbing or threats of suicide or other violence, but Griffith's statement did at least worry him enough that he called paramedics to transport Kincannon to Lexington Medical Center for evaluation. After his release, Kincannon explained Friday in a text message that it was all just a big crazy mixup because of a bad reaction to some prescription meds:

Here’s what happened last night: I had a severe upper respiratory infection, and I’m the kind of guy who never goes to the doctor. I finally went and was prescribed something called Benzonatate for my cough. I’d never taken it before, and took it for the first time last night. Basically, I went completely crazy after taking it. I don’t even remember all of it. My wife called 911 because she was worried about me and my behavior was way out of character and erratic, and she was afraid for her safety and mine. The cops came and they called EMS, and EMS took me to Lexington Medical Center. My blood pressure on scene was something like 190 over 130 and I was tachycardic. The ER doctor at LMC saw me and I was diagnosed ... with an allergic reaction to Benzonatate. Apparently a very small percentage of people go absolutely nuts when they take the stuff, and I’m apparently in that very small percentage. I had calmed down by the time I got to LMC and they let me go after a brief evaluation. I’m totally fine now and not taking any more Benzonatate.

They need to add a warning label to Benzonatate: “Warning: May cause people to go completely nuts.”

Kincannon also speculated that the allergic reaction was especially intense because he had chewed the capsule instead of swallowing it, because he is apparently a Labrador retriever and someone should have hidden it in some raw hamburger. Who the fuck chews a medicine capsule? He lamented that "You’d think a guy with my IQ would know better, but I have to admit I didn’t pay any attention to the instructions when I took the stuff." Actually, considering that a guy with Kincannon's IQ thought that a good way to treat the Ebola outbreak would be to euthanize everyone with the disease and then napalm every location where they'd been found, we're astonished he's entrusted with even handling his own prescriptions.

You know, Todd, if think you have to explain that "James T. Kirk" is a Star Trek reference, you may not really be quite the SF fan you fancy yourself. What we're getting at is that you're a few dilithium crystals shy of an oscillation overthruster, Frodo. You may as well turn in your flux capacitor, Flash, because your TARDIS will never make the Kessel run in under twelve parsecs. So say we all.

The Charleston City Paper contacted Kincannon to explain his wife's statements about suicide/murder threats and allegation of domestic abuse, and received this reply, which doesn't at all leave us terrified about how the weekend may have gone at Casa Kincannon:

No clue. My wife says she only discussed stuff that happened since I'd been on the Benzonatate, which hadn't been very long. Once we got to the hospital and it got out of my system, I went back to normal and am totally fine now.

That Benzonatate is some powerful stuff -- apparently its rare hallucinogenic side effects extend even to people who haven't taken it at all, which is the only reasonable explanation for the deputy's delusional report of things that Ms. Griffith obviously never said.