RIP Ted Cruz, For Now You Are Dead. A Wonkette Post-Mortem! 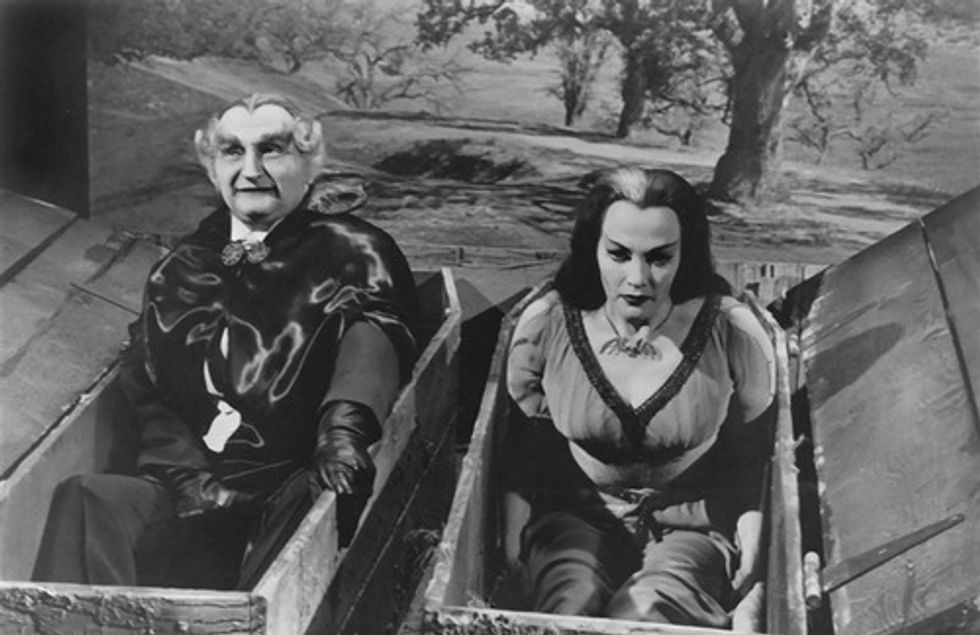 Ted Cruz and his "running mate."

Because he's just a fucking dick.

[wonkbar]<a href="http://wonkette.com/594376/ted-cruz-has-no-friends-and-everybody-hates-him-lol"></a>[/wonkbar]Everybody in Congress hates Ted Cruz so much, to the point that a lot of them have been willing to blow Donald Trump just to make a point. Why? Because Ted is an obstinate prick who talks shit about his own colleagues, doesn't follow the fucking rules, and he's a smug motherfucker to boot. He's been that way since college.

John Boehner said it just last week, that Ted Cruz is "Lucifer in the flesh" and a "miserable son of a bitch." He's so terrible he's been yr Wonkette's Legislative Shitmuffin Of The Year in TWO DIFFERENT YEARS.

[wonkbar]<a href="http://wonkette.com/596150/ted-cruz-challenges-rapscallion-president-obama-to-fight-club-him-to-death"></a>[/wonkbar]Oh, and he's always trying to come off SO tough and "Say it to my face!" He challenged Donald Trump to a duel basically, and he's huffed and puffed about how President Obama should meet him to fight after school, blah blah blah.

Shut up, you dumb pussy, you are BENEATH the president.

Because he's a fucking terrible person.

[wonkbar]<a href="http://wonkette.com/600711/ted-cruz-wishes-child-sex-slaves-would-think-of-the-unborn-babies"></a>[/wonkbar]Ted Cruz has been holding up a bill to stop CHILD SEX SLAVERY, because his dumb wee wee hole is worried about abortion. In response to the Brussels terror attacks, he wanted to patrol Muslim neighborhoods IN AMERICA. That's when he wasn't blaming it on Syrian refugee babies.

Oh, and shall we talk about his #jokes? He had a HILARIOUS April Fools Joke! It was a Rick-roll! It wasn't funny! Oh and one time he decided to ruinOffice Space forever with one of his campaign ads, because he's that awful.

[wonkbar]<a href="http://wonkette.com/587435/hey-ted-cruz-why-dont-you-shove-your-joe-biden-jokes-right-up-your-bible-hole"></a>[/wonkbar]We could let those slide as stupid #DadJokes if it weren't for Cruz's propensity for LOL making fun of Joe Biden the week his son died and KNEESLAPPER! making fun of Jimmy Carter the DAY AFTER Carter announced he had brain cancer. Oh and HAHAHA there was that time he told hilarious #jokes about guns just days after Dylann Roof murdered nine black churchgoers in Charleston, South Carolina.

Fuck you, Ted, for real.

Because he spoiled Star Wars.

Because he constantly mouth-hugs Jesus, running around like he's the fucking Anointed One.

[wonkbar]<a href="http://wonkette.com/588154/being-gods-chosen-presidential-candidate-giving-ted-cruz-nasty-case-of-stigmata"></a>[/wonkbar]Remember how Ted Cruz and his dad were SO convinced Jesus had picked Ted to run for president? Hahahaha, what a practical joker, that Jesus! And his poor wife, Heidi, is under the impression that Ted Cruz's face actually LOOKS LIKE GOD'S FACE. Who knew the Almighty looked like such a creeper?

However, it was only OK for him to yammer about Jesus all the time. He thinks the rest of the candidates should shut their mouths about Jesus, because they're obviously not as sanctified as he is.

[wonkbar]<a href="http://wonkette.com/590428/ted-cruz-will-save-jew-churches-from-the-homosexuals"></a>[/wonkbar]Oh and don't even get us started with his nasty-ass rhetoric when it comes to bullshit like RELIGIOUS FREEDOM! and protecting YOUR WIVES AND DAUGHTERS from transgender people who need to take a leak.

He's a gay-hatin' motherfucker for Jesus, that's for sure.

Because he punches his wife in the face so he can cuddle with his dad while he's dropping out of the Republican race.

He probably forced Heidi to make him 100 cans of soup afterward.

Because he's fucking gross and weird about sex.

But he also knows he doesn't have to support women having easy access to contraceptives because hey, he didn't stick all the babies in his wife's babyhole, because he keeps a lot of condoms in his panties drawer. Why can't America just do that?

Because he banged all the ladies and his dad helped kill JFK, ALLEGEDLY.

[wonkbar]<a href="http://wonkette.com/600012/is-ted-cruz-adulterous-foreign-born-whore-maybe"></a>[/wonkbar]OK, these are at the bottom, because they are from the fucking National Enquirer, so they are probably bullshit. (BUT MAYBE NOT!) But even if the rumors of Ted Cruz banging a bunch of ladies with his thimble penis are NOT true, that doesn't mean we haven't experienced pain and suffering from having to imagine Ted Cruz in the act of coitus.

[wonkbar]<a href="http://wonkette.com/597828/everybody-hates-ted-cruz-and-his-stupid-foreign-born-face"></a>[/wonkbar]So there you have it, America. Those are just SOME of the reasons America and Jesus and little children and woodland creatures and space aliens and wasps and puppy dogs and everybody else we're not thinking of hate Ted Cruz so much. We could have included so many more things, but we figured fuck it, we don't want to spend any more time talking about his stupid, foreign-born face.