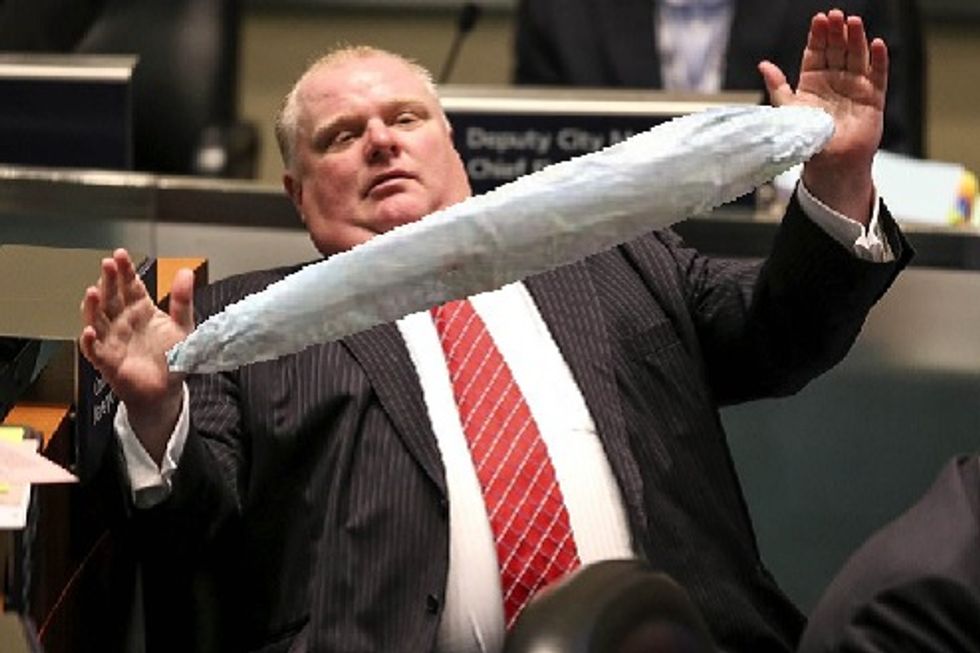 Toronto Mayor Rob Ford called on Canada's government todecriminalize marijuana Thursday, but later said nah, nevermind, forget it, bad idea you know, he must have been totally wasted to have suggested anything of the sort, and are you going to finish that burrito? You sure?

Ford initially floated the idea on a Washington DC radio show The Sports Junkies, where he has a weekly gig making NFL picks, because he's just a regular guy who likes a bit of football and crack cocaine.

“I’ve questioned that too sometimes why wouldn’t [the Conservatives] at least decriminalize it and try to get revenue from it,” Ford said when prompted by the show’s hosts about marijuana laws.

“That probably won’t happen up here because we have a Conservative government,” the mayor said. “They’re very strict when it comes to marijuana and any other drugs -- so it’s not going to happen here.

He also noted that while Canada does allow medicinal use of marijuana with a prescription, he thought it unlikely that decriminalization or legalization would ever happen "unless the government changes. I don’t see the Conservative government ever letting that happen.”

Later in the day, Ford backed away from the suggestion like a stoner when the big police dog sniffs out the stash under the seat of his van.

“I am not getting into federal issues like that,” Ford said. “That’s a federal issue. I am going to stick to municipal issues.”

He admits he did try to weigh in when asked but he said he really isn’t up on the debate that does not fall into his elected purview and probably should have stayed away from it.

“I was trying to explain it was a federal thing but you know on that show they are always throwing curve balls,” he said, laughing.

Ford then stared into the middle distance for several uncomfortable minutes, occasionally giggling as if to some private joke or cosmic irony, before muttering, "I really wish I was in that thing where I was, y’know, inside? Like in a house?" and abruptly ending the press briefing.