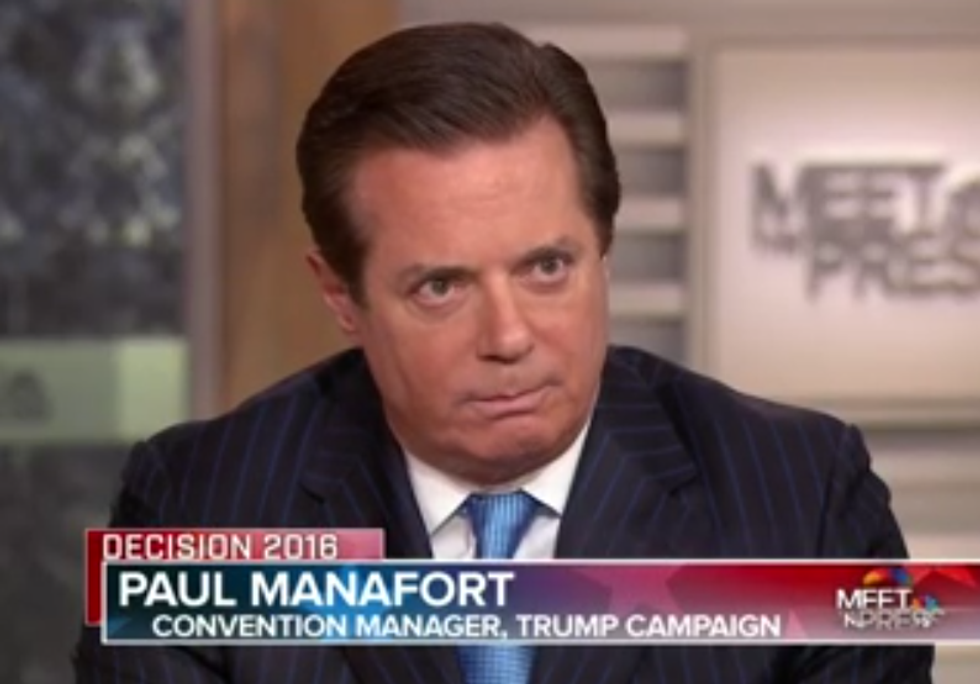 On July 26, the morning after Trump campaign chair Paul Manafort testified behind closed doors for the Senate Intelligence Committee, Donald Trump Twitter-bated out a ban on transgender people serving in the military, which top military brass are basically ignoring right now. On top of that, he randomly threatened then-acting FBI director Andrew McCabe over his allegedly nefarious ties to Hillary Clinton (which don't exist), which seemed weird and out of left field, but that's Twitter Trump for you. Oh, and also he bitched that morning at Alaska GOP Senator Lisa Murkowski for her principled vote against murdering healthcare for her constituents. What the hell was he trying to distract us from?

PERHAPS he was trying to make some headlines, just in case news leaked that special counsel Robert Mueller's team sent FBI agents to Manafort's house early that morning, while it was still dark, and raided the hell out of it. PERHAPS he was also firing a warning shot at McCabe, because he didn't like the FBI showing up at his buddy's house like that. The Washington Post has the scoop:

FBI agents raided the Alexandria home of President Trump’s former campaign chairman late last month, using a search warrant to seize documents and other materials, according to people familiar with the special counsel investigation into Russian meddling in the 2016 election. [...]

But wait, hasn't Manafort been cooperating SO GOOD with these investigations? He met with the Senate Intelligence Committee and gave them all the notes he took during that meeting with Donald Trump Jr. and all the Russians at Trump Tower. He turned over all kinds of other documents to Congress. (And so did Trump Jr. and the Trump campaign, which handed over THOUSANDS of documents, probably all the way down to the take-out menus, because they are just trying to "help" the investigations along by bogging them down in paperwork.)

We guess Mueller was suspicious Manafort was cooperating TOO GOOD with the investigations, turning over all kinds of useless paper and keeping the good stuff for himself. In other words, he wasn't really cooperating, and Mueller was able to show a judge he had probable cause to believe Manafort deserved an early morning visit from the FBI's finest:

The search warrant indicates investigators may have argued to a federal judge they had reason to believe Manafort could not be trusted to turn over all records in response to a grand jury subpoena.

Moreover, Mueller might have been worried Manafort would try to destroy evidence, as former Justice Department spokesperson and current MSNBC contributor Matthew Miller notes on Twitter. Miller also flags a Twitter thread arguing that, for a judge to sign off on a 4:00 AM raid on Trump's freaking CAMPAIGN CHAIRMAN, before Manafort had even had a chance to put his panties on, have a spot of coffee, and check his offshore bank accounts to see if his latest check from a Russian oligarch cleared (allegedly!), Mueller would have to have had really significant evidence that he would find something BIG in that search.

Manafort’s allies fear that Mueller hopes to build a case against Manafort unrelated to the 2016 campaign, in hopes that the former campaign operative would provide information against others in Trump’s inner circle in exchange for lessening his own legal exposure.

WHOA IF TRUE, and it's probably true!

We are guessing Robert Mueller has probably found quite a lot of creepy crawly crimey Manafort stuff, considering the number of shady deals Manafort seems to have been involved in in his work as a LITERAL ACTUAL FOREIGN AGENT. The New York Times reports that investigators were looking for "tax documents and foreign banking records," which leads us to wonder whether they raided his apartment at Trump Tower too. They should probably check there! Or one of his other one million apartments, bought with weird mortgages from strange banks!

Regardless, this helps explain why Donald Trump has been trying to sweet-talk Robert Mueller through his lawyer, while he bad-mouths him in public. We already knew Mueller was going after literal actual foreign agent/former national security adviser Michael Flynn -- as Matthew Miller also notes on Twitter, the first one to REALLY flip gets the "golden ticket," but there is only ONE golden ticket -- and he's assembled a team of legal badasses of the caliber you hire when your real target is somebody much, much bigger, more tremendous, YOOOOOOOOGER than these piddly-ass fucks. (We are talking about the orange fish.)

So things are moving pretty fast, it seems! Wonder whose house Mueller's boys were raiding Tuesday afternoon when Trump threatened to hulk-smash North Korea with nukes.

Wonkette salaries are fully funded by folks like you! If you love us, click below to generously pay our salaries!