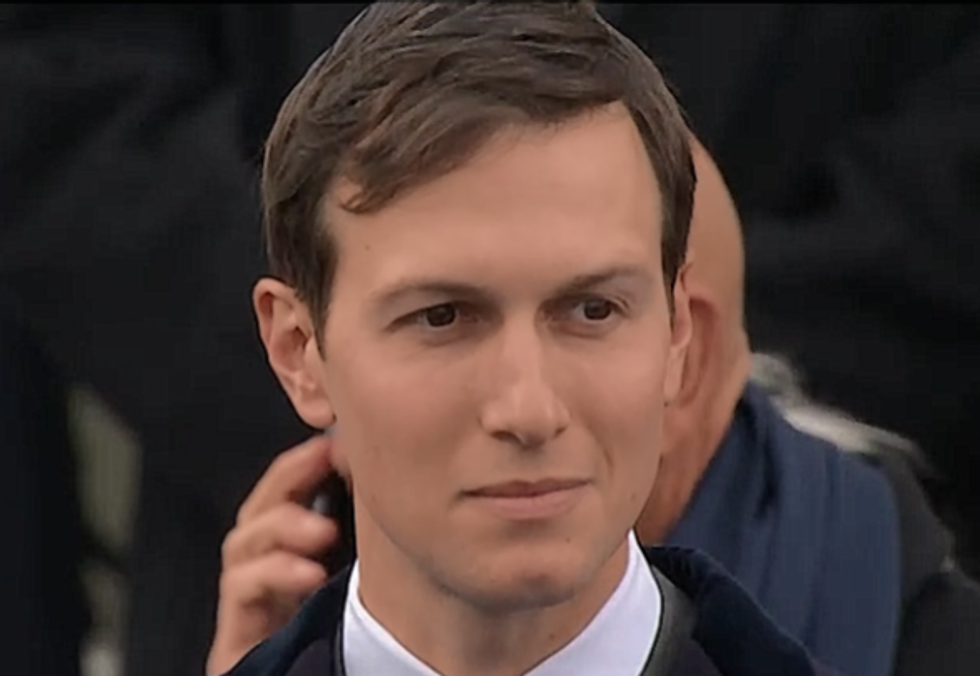 Donald Trump still starting international incidents with his white supremacy and his deep feelings of elderly mediocre white male inadequacy? Still wandering the halls of the West Wing to see if Barack Obama hid his real Kenyan birth certificate somewhere in there? Cool story, bro, let's talk about the Russia investigation some more.

The breaking news from the Robert Mueller probe is that Mueller went to Jared! It happened earlier this month, and according to CNN the special counsel wanted to see if Jared Kushner had any information to share that would suggest disgraced literal actual foreign agent/former national security advisor Michael Flynn should NOT go to prison forever:

Mueller's team specifically asked Kushner about former national security advisor Michael Flynn, who is under investigation by the special counsel, two sources said. Flynn was the dominant topic of the conversation, one of the sources said. [...]

One source said the nature of this conversation was principally to make sure Kushner doesn't have information that exonerates Flynn.

Silly Robert Mueller. None of the Trump people have information that EXONERATES anyone. They all have info that INCRIMINATES people. (Robert Mueller knows that, of course. We are just saying a tease about the special counsel! TEASE! Is this week over yet?)

Now, we know Jared Kushner is 100 percent innocent of all Russian crimes. He told us so, which makes it true! Don't worry about the weird meetings he had during the Trump transition with the Russian ambassador and sanctioned Russian bankers, which are starting to reveal a vague outline of a quid pro quo between the Trump campaign and the Kremlin, or that he keeps having to update his financial disclosure and security clearance forms because he can't remember any of his Russian foreign contacts or financial ties. And don't pay attention to how he keeps forgetting to turn over ALL his Russian emails when asked by Congress. And forget about how it was reportedly Kushner who pushed hardest for his pops-in-law to fire James Comey over the Russia probe, a detail Robert Mueller is probably very curious about in his investigation into Trump's obstruction of justice.

Oh yeah, and Kushner was at Trump Junior's Russian meeting in Trump Tower, which just screams of a quid pro quo between the campaign and Russia to lift the sanctions.

And Kushner oversaw the shady Trump data operation, which is interesting since we now know Junior was conspiring directly with WikiLeaks, not to mention all the shady Facebook action Russia was committing on Trump's behalf. Oh, and there's that weird company Cambridge Analytica, which worked for the Trump campaign, and which directly offered to help WikiLeaks get all its anti-Hillary dirt in order.

NONE OF THAT STUFF MATTERS, SHUT UP.

We are going to guess Kushner wasn't able to share any information pertaining to Michael Flynn's innocence, which makes sense now that it seems Flynn may be working on a plea deal of some sort. We don't know all the things Flynn is guilty of -- we just know he's guilty. It's worth noting that grand jury testimony related to the Flynn Intel Group and Flynn's other foreign agent work has been rescheduled for the time being, for reasons that are as of now unclear.

Another interesting detail? The White House has been making sure everybody knows Trump will not be contributing to Michael Flynn's legal defense. Are they making themselves clear? They are not helping Flynn because Flynn is bad and they have never met Flynn. Under the bus he goes, just like they did with Paul Manafort.

We predict that once Mueller has fully flipped Flynn and sets his sights directly on Jared Kushner, the White House will start telling everybody that Donald Trump has never met Jared Kushner, and moreover that he didn't approve of his hot daughter's marriage to that very naughty Jewish globalist boy in the first place.