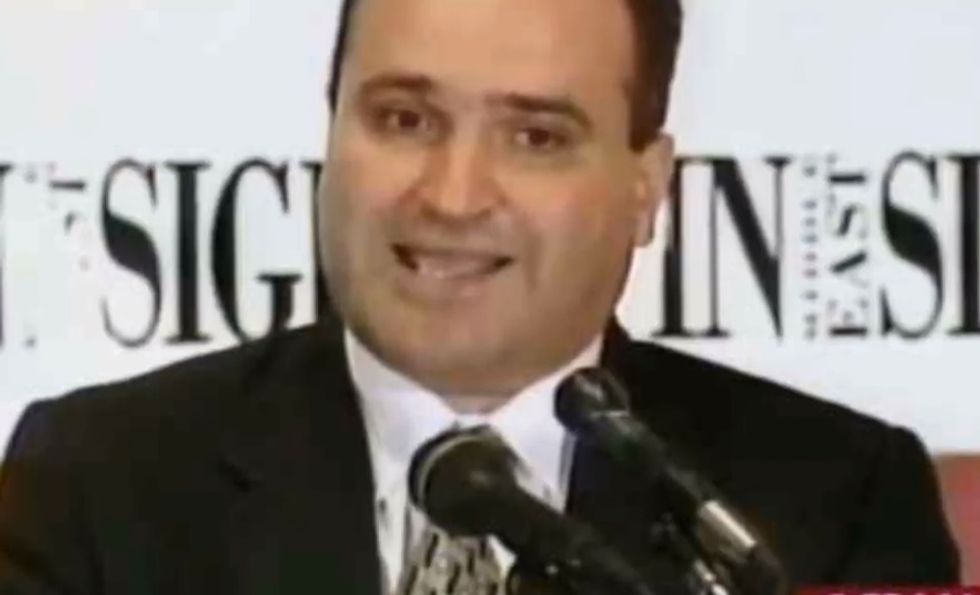 On Monday, we LIGHTLY ALLUDED to a story that broke this weekend, about how special counsel Robert Mueller has been up the ass of this Lebanese-American lobbyist named George Nader. The general story, explained by the New York Times, is that Mueller is trying to figure out if the United Arab Emirates has been using Nader to buy influence with the Trump regime. We're going to get into a little more detail about that in a second, and get ready, because we're diving into the aspects of this story that involve the UAE/Saudi Arabia/Jared Kushner/Michael Flynn grifting to steal the Middle East and give it to rich Russian oligarchs, sheiks, and other assorted global crime families including the Trumps, and at this point, that shit is CONFUSING.

But first, the big news, broken last night by CNN and then expanded on by the New York Times, is that Nader is actually a cooperating witness for the Mueller investigation now:

An adviser to the United Arab Emirates with ties to current and former aides to President Trump is cooperating with the special counsel, Robert S. Mueller III, and gave testimony last week to a grand jury, according to two people familiar with the matter.

Mr. Mueller appears to be examining the influence of foreign money on Mr. Trump’s political activities and has asked witnesses about the possibility that the adviser, George Nader, funneled money from the Emirates to the president’s political efforts.

Interesting! Also interesting is how Mueller nabbed the dude. As NYT tells it, on January 17 of this year, Nader landed at Dulles in DC, with big plans to fly off to Mar-a-Lago and party with Trump in celebration of his first year in office. If you'll remember, Donald Trump did not get to go to his party because of the government shutdown, which made him MAD. Well, neither did Nader! Because Mueller's boys met Nader at Dulles, threw grand jury subpoenas and warrants at his bathing suit area, and stole his iPhone, and he's been cooperating ever since.

Remind you of how things went down for another Mueller witness, whose name rhymes with Pop-A-Lock-O-Puss?

Remember that weird meeting in Seychelles late in the Trump transition, facilitated by Sheik Muhammad bin Zayed, the fucking crown prince of Abu Dhabi, where Blackwater pig trash Erik Prince, who was unofficially representing the Trump people, hooked up with a Russian oligarch guy, Kirill Dmitriev, the director of the Russian Direct Investment Fund, who is close to Putin? The investment fund, into which the UAE invests a lot of money, is under sanctions, because of Russia's illegal invasion of Crimea. In Prince's obviously dishonest testimony to Congress, it was no big deal, and he basically got on an airplane to go to the Seychelles to eat dinner by himself, pump his nipple muscles in the gym by himself, and fly away the next morning. (Of course, as Politico's Kyle Cheney notes on Twitter, Prince also accidentally seemed to acknowledge in his testimony that intel intercepts of that trip might expose his cover story as a big lie, but he obviously didn't mean to say that.)

Anyway, Nader was there for that meeting, as the crown prince's representative!

Also, Nader used to work for Blackwater, isn't that just too coincidental?

According to NYT, Nader has been spilling secrets about that meeting, other meetings in Trump Tower during the transition -- remember the secret Trump Tower meeting just a month before the Seychelles meeting, starring Jared Kushner, Michael Flynn, Steve Bannon, and the very same crown prince of Abu Dhabi? Yup, it appears Nader was there too! -- and also meetings Nader attended at the White House with Kushner and Bannon.

Remember how during that same period, He Went To Jared was trying to set up secret "back channels" with Russia in meetings with then-Russian Ambassador Sergey Kislyak in order to communicate with Vladimir Putin, meetings he proceeded to forgetfully lie about constantly? Remember how Kush was also meeting with Sergey Gorkov, the head of the sanctioned VneshEconomBank?

Remember the very weird shit Mueller is looking into, about how Kushner may have been driving Trump foreign policy to punish nations like Qatar that won't grift with him? Remember how Jared has been under the covers with Saudi princes with a flashlight playing "You show me yours, I'll show you mine?" Remember how it was so fucking weird how Trump's first big state visit was a ball-touching ceremony in Saudi Arabia?

Remember that extensive grift Michael Flynn -- Mueller's first cooperating witness -- was involved in, to create a "Marshall Plan" to "recolonize the Middle East," to build nuclear reactors in the Middle East, and otherwise steal the Middle East's resources and give leftover uraniums to Russia? This, of course, involved lifting Russian sanctions, because how can you even run a global crime grift with Russian oligarchs if you can't even pay your Russian oligarchs? PSHAW.

If you'll recall, Cooperating Witness Flynn was sending text messages to all his co-conspirators like "Ka-CHING!" on inauguration day, because they were all about to get riiiiiiiiiiiiich! First order of business? Making sure the Russian sanctions were "ripped up." Remember how Flynn was supposedly fired for lying to Mike Pence about his meetings with the Russian ambassador, which were about making sure the sanctions were "ripped up"?

Oh hey, did you see the news that Robert Mueller is putting a laser focus on Trump dipshit SAYS WHO safety school lawyer Michael Cohen and how he might have been involved in so many conspiracies? One of the episodes the Washington Post mentions is that time a Ukrainian politician handed Cohen a "peace plan" for Ukraine (that involved ripping up Russian sanctions!), which he was supposed to hand-deliver to the brand new national security adviser, Michael Flynn. Cohen's response to that story has always been "SAYS WHO?" but then again, that's Michael Cohen's story about everything including whether or not he wiped his ass after his last shit.

We don't know why, but we just bet all this shit is related somehow, and we bet George Nader knows a FUCKING LOT about it, and that is why he is now in a hot tub with Robert Mueller.

Another suggestion: In recent weeks, we've talked about how it seems Mueller is about to hit the bull's eye on the great Russian conspiracy to get Trump elected, and the smaller moving parts of the conspiracy involving what the Trumpers knew about the hacking of Hillary Clinton's emails (and maybe hacking other things like voting machines, we are just saying!). We are suggesting it's possible that the great conspiracy to get Trump elected was itself part of an even greater conspiracy to reorder the world and give the spoils to a bunch of rich motherfuckers without regard for American democracy, people who are indeed averse to Western democracy itself. Through this lens, it's not a Trump-Russia conspiracy. It's a worldwide crime family conspiracy, involving the Saudis, the Emiratis, Russian oligarchs and other oligarchs from the former Soviet states, the Trump Crime Family and God Knows Who Else.

When we wrote about Michael Flynn's Middle Eastern grift, we noted that he really got off fucking easy. Sure, he may be having to sell his precious townhouse in Alexandria, Virginia, to pay his legal bills. But all he had to do was plead guilty to one LITTLE BITTY TINY COUNT of lying to the FBI. There is no way in hell Robert Mueller gave Flynn that deal unless Flynn brought a nuclear bomb of information to his Queen For A Day interview and it's literally worth it to Mueller to let Flynn get off almost scot-free.

And now Mueller has this Nader boy cooperating.

We don't know how this is all going to turn out, but we have a feeling when the truth is all exposed, it will be breathtaking, and may shake the Western world to its very core.