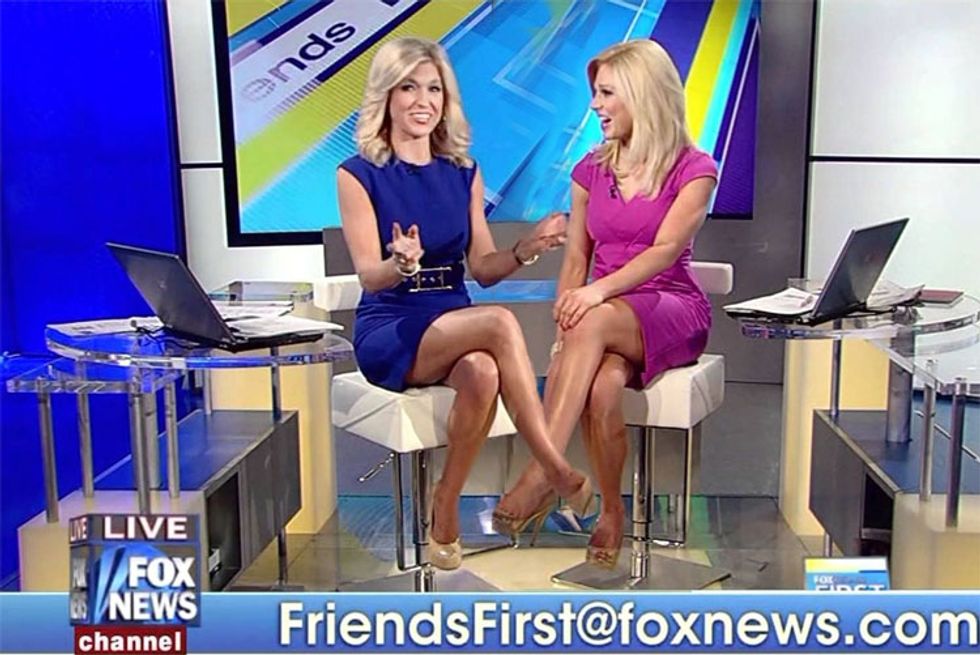 She knows how to use them

Roger Ailes, that jowly old leftover from the Cantina scene in Star Wars, turns out to be exactly the sort of high-minded gentleman that you might expect, assuming his mind is located a few inches south of his belt buckle. We have another batch of pre-release ugly bits from that new biography from Gabriel Sherman, this time courtesy of the intrepid muck-sorters at Media Matters, who found the icky stuff so people who eagerly buy the book can plausibly say they never read it. Turns out that one of the longest categories in the book's index is "Legs, Ailes's fixation on."

As we already knew from Gretchen Carlson, ladies on Fox and Friends were forbidden to wear the pantaloons; now we find that no matter what was going on in the world, Ailes knew what mattered for Fair And Balanced News: gams, drumsticks, pins, alabaster pillars, stems, getaway sticks, Legs. We knew that he was kind of an extremist, but had no idea how obsessed he was with extremities.

Among the charming anecdotes, we find these delights:

And then there's the job interview where Ailes kept reminding the woman who was applying to be a producer that he was single and awfully easy on the eyes, or the time when he told Don Imus he'd have to be pretty drunk to find a couple of his female anchors attractive (though they'd "get to be tens around closing time"), and his bitchy put-down of Gretchen Carlson:

Ailes pointed out she was once Miss America, then added, "It must not have been a good year."

So, yes. It's just the kind of professionalism we'd expect from the man who became a conservative media expert once he suggested to Richard Nixon that he'd do better on TV with a little makeup, and maybe some fuck-me high heels.