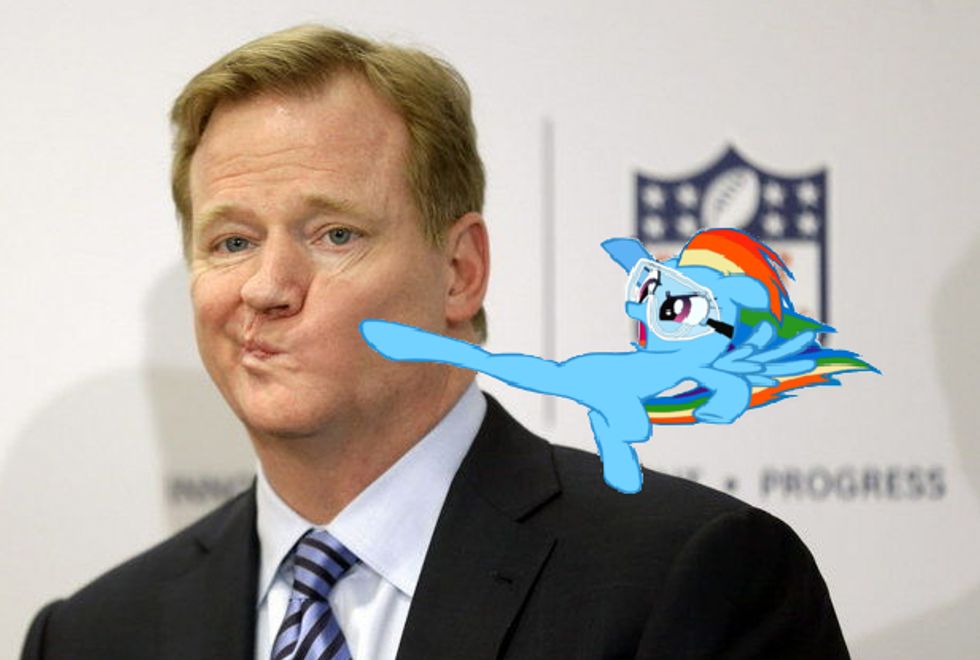 NFL Commissioner Roger Goodell took strong action against Baltimore Ravens f'ball player Ray Rice on Monday,suspending him indefinitely after a videotape showed that punching a woman into unconsciousness is actually violent. Everyone was very glad to see Goodell finally "got it," even it was a little goddamn late. Goodell followed up that impressive performance Tuesday by leaving open the possibility that Rice could be reinstated. BUT -- and this is really important -- Rice would have to prove that he'd learned his lesson and was very very sorry:

"But he would have to make sure that we are fully confident that he is addressing this issue clearly, he has paid a price for the actions that he's already taken," Goodell said in an interview with CBS that aired yesterday.

Also, Rice would have to buy the NFL some flowers and take it out to dinner some place nice, where you sit down and have to wear a nice outfit and everything. No, goddamnit, Applebees would not "do."

In addition, Goodell insisted once again that, before Monday, neither he nor anyone in the NFL had seen the video of Rice slugging his then-fiancée Janay Palmer, and so they just didn't realize how bad the assault was, cross his heart and hope to get a two-game suspension. As Deadspin notes, this is not entirely believable, given that Goodell and the NFL had previously insisted that they'd exhaustively investigated the event, but somehow came away from the detailed police report (that they very definitely did have) with the impression that maybe Ms. Palmer was just napping or something, and that's why an earlier video showed Rice helping her exit the elevator horizontally on the floor.

CBS reporter Norah O'Donnell pointed out the problem with that logic in her interview with Goodell:

O'Donnell: But what was ambiguous about her laying unconscious on the floor being dragged out by her feet?

Goodell: There was nothing ambiguous about that. That was the result that we saw. We did not know what led up to that. We did not know the details of that. We asked for that on several occasions. It was unacceptable in and of itself what we saw on the first tape. And that's why we took action, albeit insufficient action. And we acknowledge that, we took responsibility for that -- I did personally -- and I take responsibility for that now. But what we saw yesterday was extremely clear and graphic and was absolutely necessary for us to take the action we did.

Look, mistakes were made, and it's not like Rice was smoking marijuana or engaging in dog fights, so could we all just move on, please? Maybe next time this happens, Goodell will wait TWO days before explaining how a wife-beater can make it back onto the f'ball field.