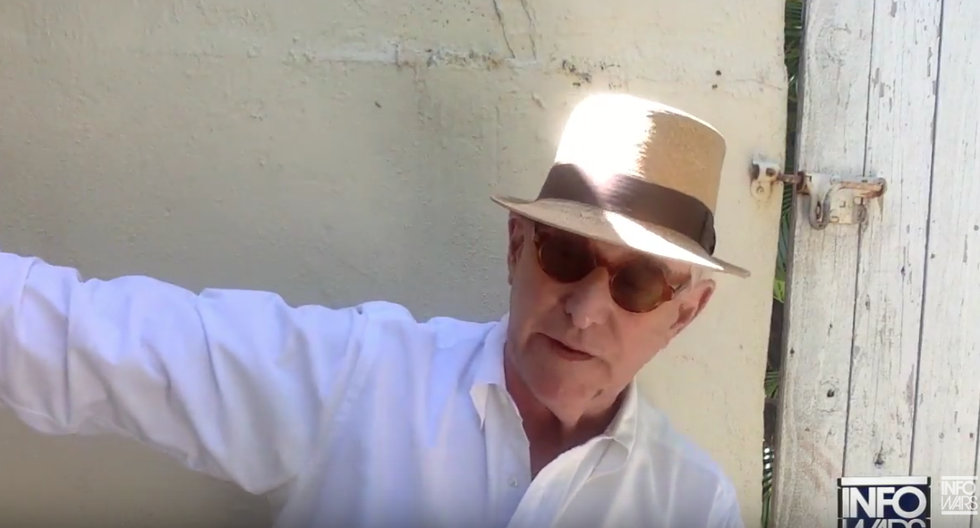 HE'S ALIVE! IT'S A JESUS MIRACLE!

Uh oh, it is like deja vu all over again! Crazy pants Trump pal Roger Stone, who has been like Trump's political "guru" for years or something, and who also seems to have had some sort of private Twitter sexxx, during the election season, with Guccifer 2.0, one of the Russian-backed hackers who screwed with our American election, is one of the CIA's hottest targets, according to crazy pants Trump pal Roger Stone. Like, the "Deep State" wants to go REALLY deep on him, because he is such a bold speaker of #TheRealTruth.

In January, Stone broke all our hearts when he revealed on the Alex Jones Real News And Information Show that he had been murdered to death by the "Deep State," by being poisoned with polonium 210, which Russian intelligence has actually used to murder at least one former Russian FSB agent that we know of. (If you're new, the "FSB" is like the Russian version of the "CIA," just like "Canada SCOTUS" is the Canadian corollary to "SCOTUS.") However, miraculously, Stone made a complete recovery from getting polonium-ed to death, glory halleljuah!

Until this week, when the "Deep State" tried to maketh murder upon him again, allegedly, in a car accident that happened, allegedly:

In an appearance Wednesday on conspiracy-theorist Alex Jones’s radio show, former Donald Trump adviser Roger Stone claimed he had recently been in a car that was T-boned by “deep state” actors in an attempted assassination. “They have poisoned me, they have smeared me, and someone in a car tried to kill me,” Stone told Jones, appearing healthy via satellite after the alleged accident.

Well, shit! America's "deep state" must be totally DOY DOY DOY DOY DOY when it comes to trying to assassinate the all-powerful Roger Stone, if they keep FUCKIN' IT UP like this! Because to be clear, Stone wasn't telling some story about something that happened like last month, he was talking about a fender bender he had TODAY, March 15, 2017.

Good good, sorry to hear the old boxin' eye might need some Visine, but otherwise!

AND YET HE PERSISTED! Let's watch Stone's WAR VIDEO APPEARANCE on Alex Jones today, to see if the patient can speak:

According to the Daily Beast, after Stone's interview, he went to the hospital to get treated for this, the "Deep State's" latest derpy attempt on his life.

We at Wonkette, despite our snarky demeanor, are very happy that Stone emerged from today's car accident safe and sound, assuming a car accident actually happened, allegedly. That does not mean we are not allowed to laugh our fucking pants off at the stories he tells about how the CIA tried to murder him with cars, but an airbag saved his life, allegedly.

Wonkette is entirely reader-funded. Fund us with money if you liked this post, by clicking on the happy buttons below!