Romney Campaign Responds To Bain Controv-- OH MY GOD LOOK OVER THERE IT'S CONDI RICE! 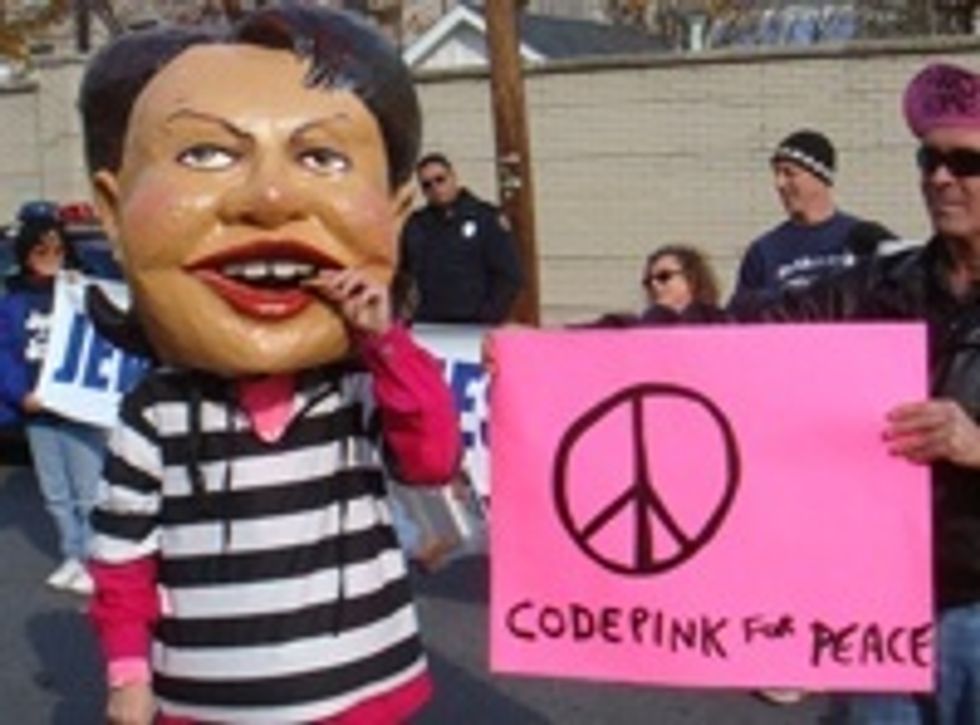 So here we were, the Great Big American Family, watching the Obama campaignjust beating the dickens out of a cornered Mitt Romney and all of his secret Bain Capital overlord-for-life titles. Didn't it seem pretty bad, relative to these other stupid nonsense gaffe days? Just look at Stephanie Cutter! Stephanie Cutter, the Obama spokesperson, calling Romney a possible felon yesterday afternoon was the most baller campaign move we've seen in some time from this pathetic limping death hole of an ostensibly left-of-center political party. But maybe the attacks weren't really all that damaging -- one of those "secret internal polls say opposite of all public polls" type deals. Hmm, we'll see. BUT THEN, LAST NIGHT: a sudden blast of 900 billion emails from Mitt Romney's campaign about his VP selection process, along with a fat "CONDI FOR VEEEPEPEPEPEP??" leak to Drudge? Why, this attempted topic switch had all the trappings of a diversion! Diversion us away, sweet Romney flacks, wherever you'll have us.

This is sort of mean, to Condi. Which is fine -- be mean to her -- she's terrible and lies about everything and loves war war war, just loves it. Not that the mountains of childrens' corpses that resulted from her manipulation of Iraq intelligence was her only shining, VP-qualifying achievement, either: Rice, hired for her background as a Russia Scholar, *did* play a leading role in crumbling US-Russia relations to rubble and leaving good ol' entrenched mutual hostility in its place.

It's just mean to Condi for the Romney campaign to use CONDI VP? WE MAY DO IT! as yesterday's emergency escape pod from a tremendously bad news cycle, because we all know that there's a 0% chance he will pick Condi Rice as his vice presidential candidate.* She is pro-choice -- done. Well, maybe if she really wanted to, she could set to work confus-ifying her past abortion talk to look like she never really had a firm position/has always been secretly pro-life and only said she was pro-choice in public to be ironic. But no, sorry, no pro-choicey veep will work for the GOP. Which is completely reasonable. What if the Democrats picked some pro-lifer for a ticket nowadays? Yeah, no, that just wouldn't fly.

The other thing is that Condi Rice's presence would make George W. Bush and his Iraq War a front-and-center autumn election chat topic that the GOP most likely wouldn't want to go out of its way to talk about.

But other than those, what other possible problems could the GOP rank-and-file have with a black woman being on their presidential ticket?

Anyway, sorry for all that, we're a little dizzy-brained dead tired today, but in any event now seems as good a time as any to drop the block quote. Here's Matt Drudge, reporting in his fantastically gay scoop voice:

Late Thursday evening, Mitt Romney's presidential campaign launched a new fundraising drive, 'Meet The VP' -- just as Romney himself has narrowed the field of candidates to a handful, sources reveal.

And a surprise name is now near the top of the list: Former Secretary of State Condoleezza Rice!

The timing of the announcement is now set for 'coming weeks'.

*--If Romney does end up picking her though then pretend that "0%" was "100%"; it's institutionally important for your Wonkette to have been right all along, about politics.