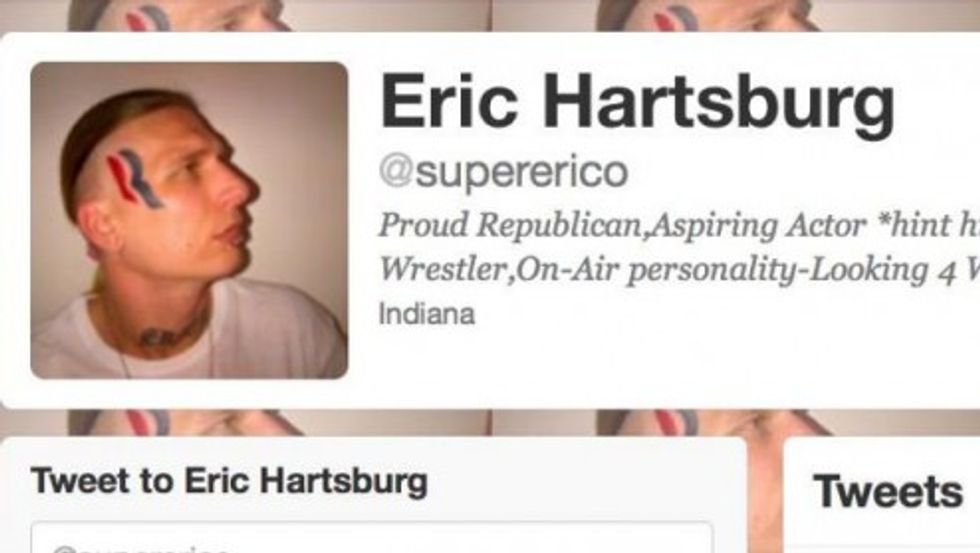 Oh god Romney/Ryan face tattoo guy. We had hoped never ever to write about this guy, and somehow managed to escape writing about him the first time around. So, in case you're just joining us, a brief recap. Dude auctioned off his noggin to the highest bidder, and said highest bidder wanted him to get a Romney/Ryan logo:

The winning bidder -- a Republican eBay user who preferred to remain anonymous -- paid $15, 000 to have Hartsburg tattoo Mitt Romney's presidential campaign "R" logo on his face. Hartsburg got the tattoo Tuesday.

Hartsburg said the eBay listing started as a joke.

"In the beginning it was done for gags and publicity, but now I see it as a way to encourage young people to vote.

"We have so many rights that we don't utilize and young people need to exercise that right," he said.

Yes, young people were FOR SURE encouraged to vote by face tattoo guy. It was inspiring, and made everyone utilize all their rights. (IMPORTANT ASIDE:  don't use "utilize" when you really mean "use." In general, there are very few situations yr Wonkette can think of that require "utilize" unless you are referring to a specific situation in which the use of something was value-added or not its intended purpose. To wit: Yr Wonkette uses a shovel to dig a hole. Yr Wonkette utlizses a shovel to hit you over the head. Enjoy your new grammar, James Joyce and mommy blog, readers!)

So face tattoo guy was inspiring young people and utilizing his rights and there was no way in hell he'd ever ever remove the tattoo:

After the Romney-Paul Ryan ticket lost on Nov. 6, Hartsburg had no regrets, telling POLITICO he was “glad to know that I did all that I could” and insisting he would never have the tat removed.

Apparently Mr. Face Tattoo Guy (nah, we're not going to look up his actual name) decided, post-election, that Mittens was a sore loser and he couldn't abide all the oppobrium (we warned you: all grammar blog, all the time now) he faced for repping Mitt:

“I could deal with being a part of a losing campaign, but to still stand behind Gov. Romney with the positions he’s taken post-election with the blame game instead,” Hartsburg said. “To be such a sore loser about it, to me I can’t walk around representing that.”

The tattoo was meant to make politics more fun, Hartsburg said, but since Romney made those remarks strangers have been shouting lewd comments and hissing at Hartsburg on the street.