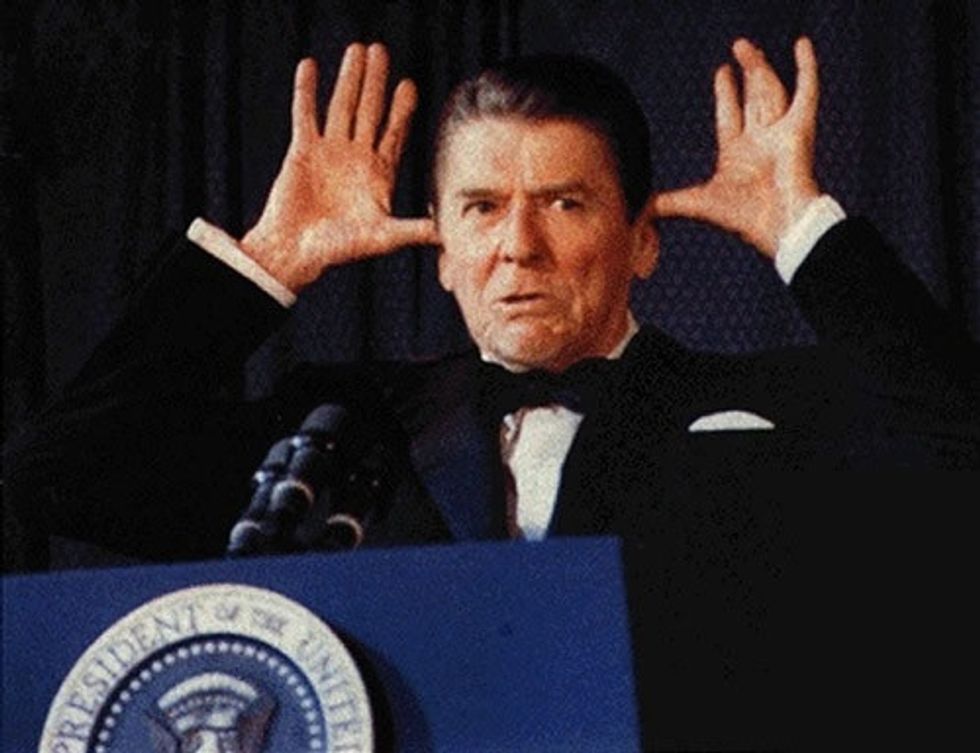 [contextly_sidebar id="RclsBlXllx652iPVTq5ktlkJIWMbwm5z"]Pointing out that Canadian-born Canadian Ted Cruz is a Canadian, from Canada, is all the rage these days. You got Donald Trump warning that Democrats will probably have him deported; Carly Fiorina concern-trolling Cruz's relatively recent pledge of allegiance to America and America only; John McCain just askin' questions; the rest of the GOP taking turns punching Cruz in the nuts; and then this whackadoodle Texan who has filed an adorable suit asking the federal court to declare, once and for all, whether Cruz is eligible to be president, with delightful nonsense references to "Enstein's theories," the Old and New Testaments, and how Obama "was not born in Kenya (Africa)."

And then there is Ronald Reagan.

[contextly_sidebar id="Yn1ckB64zriti7OhVgWnGeQT88ZMYe7O"]Republican candidates still (and always will) love to whip out their St. Ronnies and claim to be the True Heir of His legacy, while those other poseurs are definitely not the Most Reagan. There is only one Real Reagan, besides the real Real Reagan, and it is [insert name of swaggering Republican candidate here].

And that is why this ad, from Conservative Solutions PAC, which supports "Son of Cuban immigrants, Marco Rubio," is freaking hilarious:

What's Canadian about Ted Cruz? His tax plan. Cruz wants a Value Added Tax, like they have in Canada and European socialist countries. Obama and Pelosi say they're open to it! President Reagan hated it. Conservatives call the Cruz scheme "a liberal's dream" because it makes it so easy to raise taxes.

Well done, Marco Rubio's super PAC that has nothing to do with Marco Rubio! This is guaranteed to get under Cruz's thin Canadian skin, and hoo boy Halifax, we can't wait to see how he strikes back.