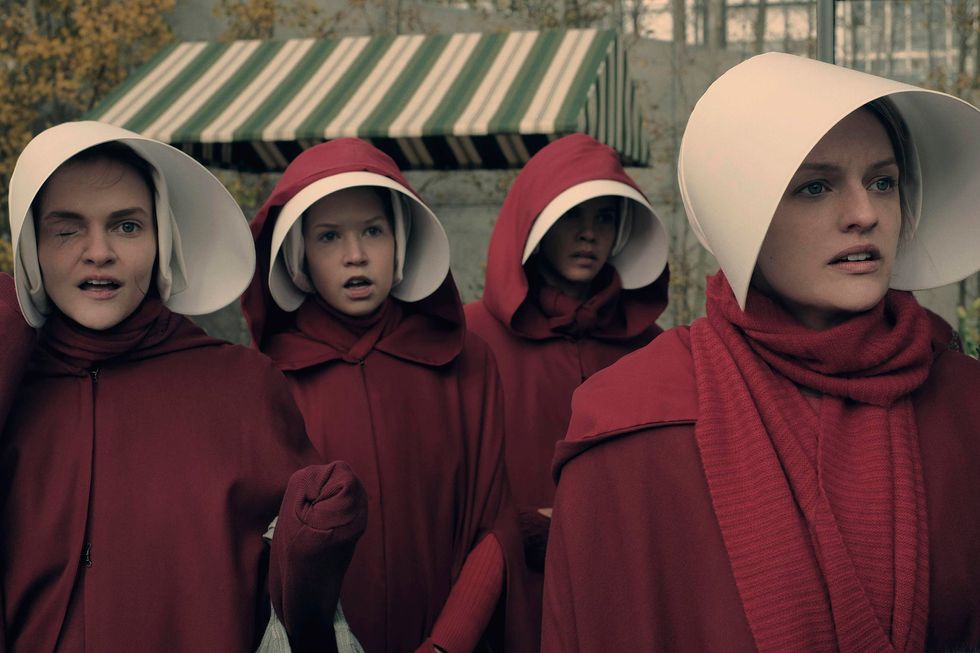 Hey, ladies of Alabama! Were you considering voting for noted (alleged?) child molester Roy Moore? Do you really like him, think he's a swell guy, and want to see his vision for America boldly enacted in your state? Well then, you might want to reconsider that whole "voting" thing. Because if the textbook Moore co-authored, Law and Government: An Introductory Study Course, is any indication, he would prefer you do no such thing. In fact, rather than going and voting like some kind of women's libber, you should probably just make Roy Moore a sandwich.

The course, which is available for purchase on Amazon, was part of a curriculum produced by Vision Forum, an extremely holy and godly organization that had to close down after its leader, Doug Phillips, admitted to having an “inappropriately romantic and affectionate” affair with a woman who was not his wife. That woman, Lourdes Torres-Manteufel, sued him and Vision Forum, accusing him of things neither romantic nor affectionate. Specifically, she accused him of sexually and psychologically abusing her from the age of 15 onwards.

Phillips was highly admired both by Roy Moore and the Duggars. What a strange and unexpected coincidence! I wonder what else they all have in common?

Now, this course was not going to get you any credit at any of America's fine educational institutions. Rather, it was a men-only course all about how the Bible is the real law of the land.

One particularly charming lecture in the course is given by William O. Einwechter of the Immanuel Free Reformed Church, and is titled "What the Bible Says About Female Magistrates." In case you were not sure, according to Einwechter, the answer is "nothing good." Said lecture is introduced by an unnamed man who doesn't seem too sure giving ladies the right to vote was all that good of an idea:

“By and large, the issue of the female magistrate ruling in authority in America would not have been anywhere near as controversial. The controversy was beginning to brew with the women’s suffrage movement.”

Einwechter then goes on to detail the many reasons why ladies should not hold public office, all of which sound a lot like "I don't want no womenfolk telling me what to do."

His first reason for this is that allowing women to do any magistrating is part of the heresy of feminism. Feminists, he explains, want everyone to simultaneously be gay and have a lot of abortions, and also are not into being told what to do by men. This, he feels, is bad.

“One of the most destructive ideologies of the last 50, hundred years have been the doctrines of feminism, which have transformed our culture and have paved the way for abortion on demand, the homosexual agenda, undermined our church, and subverted the doctrines of the biblical family,” Einwechter says.

He goes on to call feminism a “radical agenda” and says “nothing enrages feminists more than the Biblical doctrine of male headship.”

I, for one, can actually think of a number of things that enrage me more -- for instance, Bible banging creeps who go around molesting teenage girls -- but I fully confess that the "Biblical doctrine of male headship" does make me want to burst into fits of joyous laughter. There is something uniquely pathetic about adult men whining that their religion allows them to be the boss of us, and not understanding why we might not be into that.

Einwechter then goes on to explain that the job of the woman, according to the Bible, is to take care of her husband, home and children. "Glorious in her place and in her conduct and in her role,” which just so happens to involve being an uncompensated servant of some kind.

The Bible, Einwechter says, says absolutely nothing about ladies being qualified to hold political office, or even do any work outside the home; they are "the weaker vessel," and therefore must not be allowed to "dominate" men.

The best way to bring about the kind of change Einwechter wants to see in the world, he asserts, is by not voting for women who run for office. Ever. For any reason.

“Sometimes we may have a hard time discerning the faith, the character, and the views of a particular candidate. But we can usually discern if the candidate is a man or a woman. And so there is no excuse on that one.”

It may interest you to know that Roy Moore himself has never endorsed a female candidate for any office. Given that he helped put this course together, it is highly likely that he shares Einwechter's views on women in public office and women having jobs. It is also highly likely that there are Republican women in Alabama who have jobs they enjoy, and who still plan to vote for Moore in spite of the accusations against him.

In fact, Alabama currently has a female Republican Governor, Kay Ivey, who says she plans to vote for Moore despite the accusations. Perhaps she, and all those other women in Alabama, might want to consider what this country might look like if they were unable to rely on the rest of us to not vote for (alleged) child molesters who don't think women should be allowed to hold office or have jobs.

Wonkette has a job, and YOU are our boss. Pay us please.