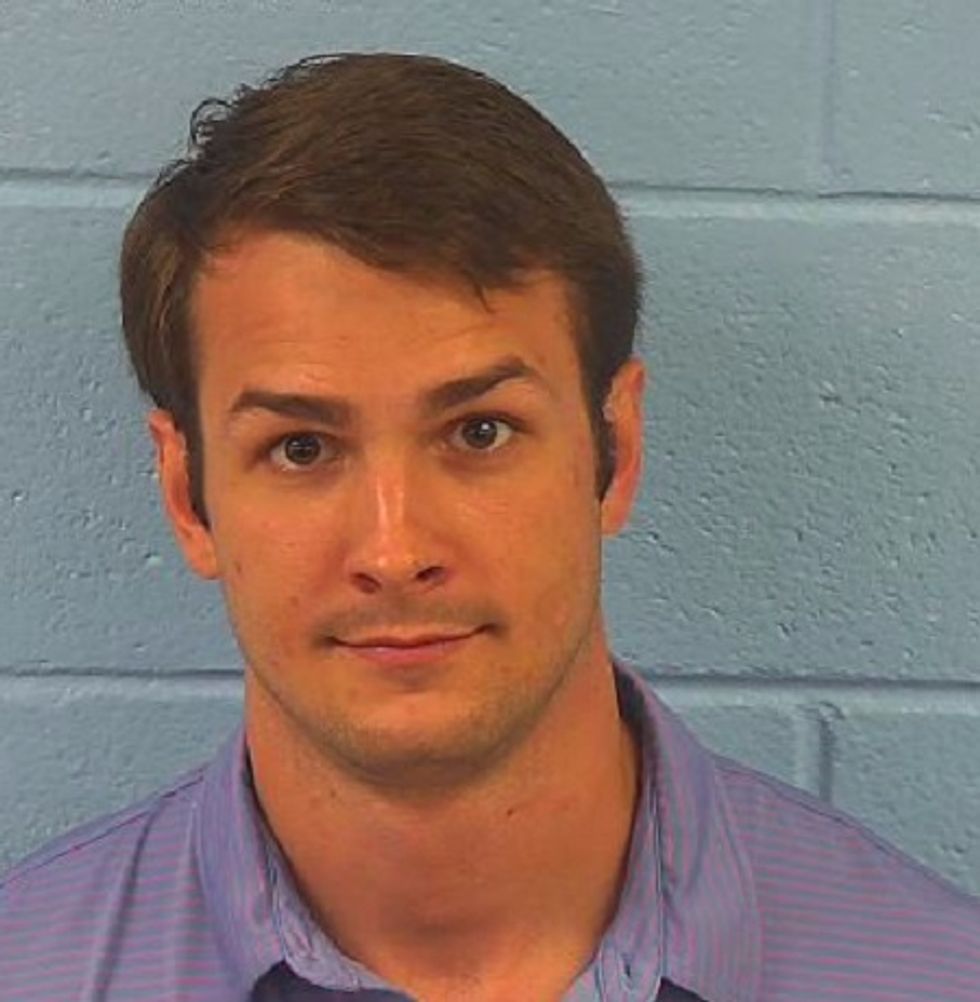 Llifeless eyes, like a doll's eyes. When he comes at ya, doesn't seem to be livin'... until he bites ya.

Caleb Moore, the 27-year-old son of Alabama Republican senatorial candidate Roy Moore, is clearly a fan of his father's principled stand when it comes to the law: If you don't like a law, well then it's fine to ignore it. That's why Daddy Moore ignored court orders to remove a giant Ten Commandments monument from the Alabama Supreme Court, and to comply with the U.S. Supreme Court's decision in favor of marriage equality. We're not certain whether Caleb heard from God Himself on whether it was divine providence that Caleb should go forth last November onto land that was not his and thereunto slay animals in a manner that is an abomination unto the law, or at least a misdemeanor. But he did it anyway, and now in addition to the two crimes he was charged with then, he also had to turn himself in on a charge of third-degree trespassing after the property owner signed a warrant for the trespass against him.

Young Caleb, lean of sinew and trollish of visage, was briefly booked into the Etowah County Jail Monday, then released on $1000 bond. This was the third set of charges stemming from his November 2016 escapade, for which he caught charges of hunting without permission and "hunting over bait." Hunting over bait, we learn, is the far from sportsmanlike practice of luring animals out with treats so you can shoot them whilst they are eating, because taking your ass out into the woods and actually hunting a deer is apparently too much trouble for a busy animal killer on the go.

This was Caleb Moore's ninth visit to the pokey after multiple arrests in Florida and Alabama for drunk driving, plus a few drug arrests, too. He was arrested on drug possession in Troy, Alabama in 2015. The charges were dropped after he entered a plea agreement and went into a pre-trial diversion program last year, which was apparently not enough to divert him from some illegal hunting on top of everything else. But maybe there's hope for the boy, since as far as we can tell he was neither driving drunk nor hopped up on goofballs when he did the trespassing and deer-baiting (we'll assume -- we haven't seen a report of what critters he was actually luring with bait).

Sort of makes you wonder what kind of parenting may have gotten poor Caleb off to such a poor start in the world. Perhaps he and Mike Huckabee's dog-torturing son can get together and form a support group for sons of Republicans who have been unjustly witch-hunted just for having a little fun.

Moore's opponent in the fall, that goody-goody Democrat Doug Jones, reopened the prosecution of KKK members who bombed the 16th Street Baptist Church in 1964, and convicted them of murdering those four little girls. Man knows what laws are. Jones has three children, all of them in college or graduate school, and they apparently learned the difference between right and wrong without a two-ton slab of rock telling them to not be monsters.

Just by way of comparison.