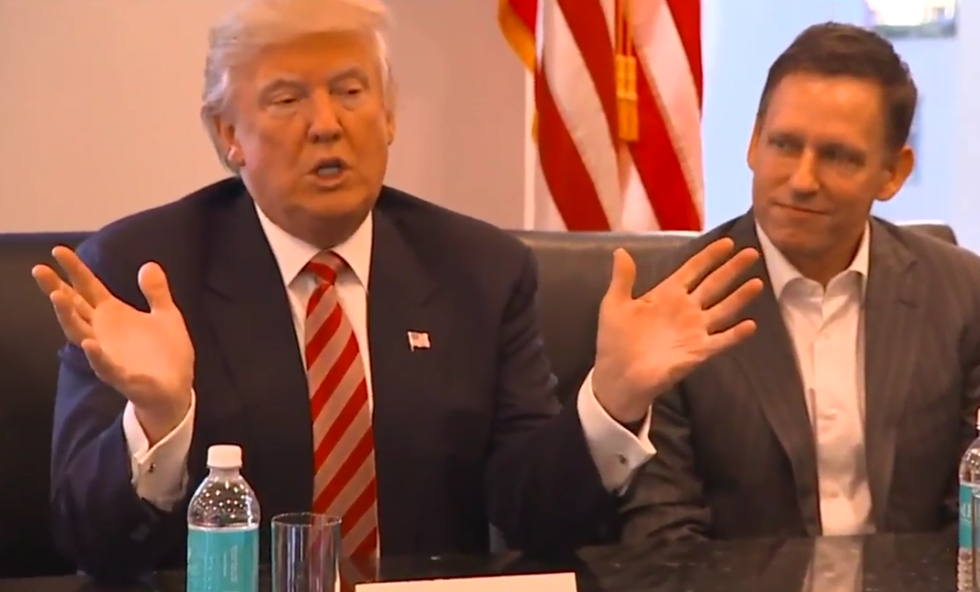 The revolving door at Trump Tower is still open, as President-elect Donald Trump hosted ALL HIS BESTEST FRIENDS who happen to be technology CEOs and bigwigs for a special meeting with himself, his children (but of course! They are the president too after all!) and Mike Pence, Steve Bannon and the other goons. Everybody was there! BoingBoing has the list, which included, among others, Amazon founder Jeff Bezos, Facebook COO Sheryl Sandberg, Tesla dude Elon Musk, Apple man Tim Cook, and sitting right next to him, Trump's best gay friend/Gawker annihilater/PayPal queen Peter Thiel, who organized the meeting. You know Cook is a gay too, which means, awwww, he seated the homosexuals together!

Guess who was NOT there? That would be Jack Dorsey, co-founder and CEO of Trump's favoritest thing in the world, Twitter. For the reason why, Politico points us to a Medium post written by Gary Coby, director of digital advertising and fundraising for the Trump campaign, that describes how Twitter refused to let the Trump campaign make a super cool #CrookedHillary emoji, to use on Twitter. Unfair!

Politico summarizes it helpfully, because the Medium post is a total whine-fest:

Dorsey personally intervened to block the Trump operation from deploying — as part of a $5 million deal between the social media company and the campaign — an emoji showing, in various renderings, small bags of money being given away or stolen. That emoji would have been offered to users as a replacement for the hashtag #CrookedHillary, a preferred Trump insult for his Democratic opponent. [...]

[RNC spokesgoon Sean] Spicer told the Washington Examiner in October, regarding the emoji dustup, that "while Twitter claims to be a venue that promotes the free exchange of ideas, it's clear that it's leadership's left wing ideology literally trumps that."

Um, OK. You can go read the whole Medium thing if you'd like, but the thrust is that Twitter was pickin' on poor lil' Trump, but it was nice to #CrookedHillary, yadda yadda.

On Twitter, CNN reporter Dylan Byers says Trump's beef with his lifeblood, Twitter, is more complicated than a mere #EmojiFight, but he doesn't elaborate. Maybe Trump is mad that Twitter said it won't help him build a registry of Muslims. Maybe he's mad how Twitter keeps banning all those fun white supremacists he likes to retweet.

Hey Twitter, you pissed about not being invited? We have a idea for you! BAN DONALD TRUMP LIKE A COMMON WHITE SUPREMACIST MILO GAY! Hahaha, that would be amazing.

Here are a couple of fun things that happened in the big sexxxy tech meeting. First of all, Trump hand-hugs his gay boyfriend Peter Thiel all weird, while Thiel has this "awwww, daddy" look on his face:

And here is an awkward handshake between Trump and Thiel. pic.twitter.com/QmvlSREnZc

And here is a video of Trump telling all the gathered critters that he just loves them, they're the best, he's going to make it so much easier for them to trade, you're not gonna believe it, it's gonna be terrific:

And finally, a tweet from HuffPost reporter Christina Wilkie, showing all the Trump kids sitting together behaving like good children, at the head of the table at daddy's big president meeting:

Awwwww, it's so heartwarming seeing all these rich people get together to help normalize Donald Trump, the thin-skinned, autocratic, kleptocratic once-and-future tyrant of America! ALL THE FEELS!