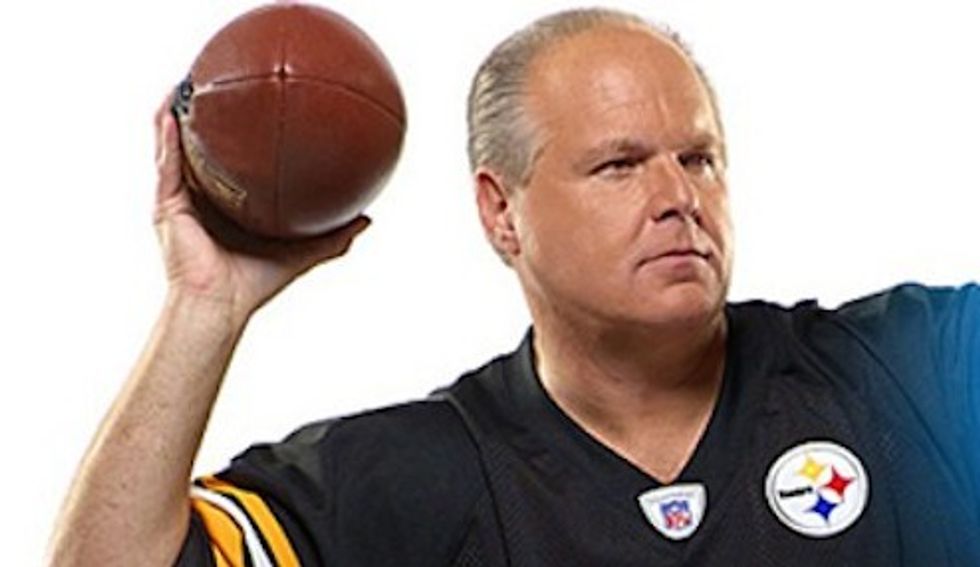 Have you heard the about the latest NFL outrage? Nah, bro, not that the Minnesota Vikings will allow admitted baby-beater Adrian Peterson to return to the game because reasons. And not the other outrage about how the NFL finally got around to firing lady-beater Baltimore Raven Ray Rice -- because it just wasn't obvious to the NFL that this was actually a bad thing, until it saw that video it hadn't seen that it had totally seen. Dude, that is so last week.

The REAL outrage, according to dick pill-popping Rush Limbaugh, is how all these sportsball girly-men have been feminized and chickified and are ruining the game of football, which is "a man's game." For MEN:

That's right, folks. Let's not forget that Rush quite rightly predicted that "things will happen" when the one and only openly gay football player, Michael Sam, was allowed to gay up the Man's Game For Men. Rush didn't tell us at the time what those "things" might be, but just look at how football is disintegrating right before our very eyes for reasons that have nothing whatsoever to do with Michael Sam!

If the feminists keep forcing these so-called men to do unmanly things like pay cheerleaders the minimum wage and comply with labor laws and hire feminists to teach them how to pretend to care about domestic violence, we may as well say goodbye to the Man's Game For Men forever. Which, unless the NFL figures out how to stop covering for rapists and racists and lady-beaters and baby-beaters (but not potheads, of course, because that's really bad), would be fine with us.