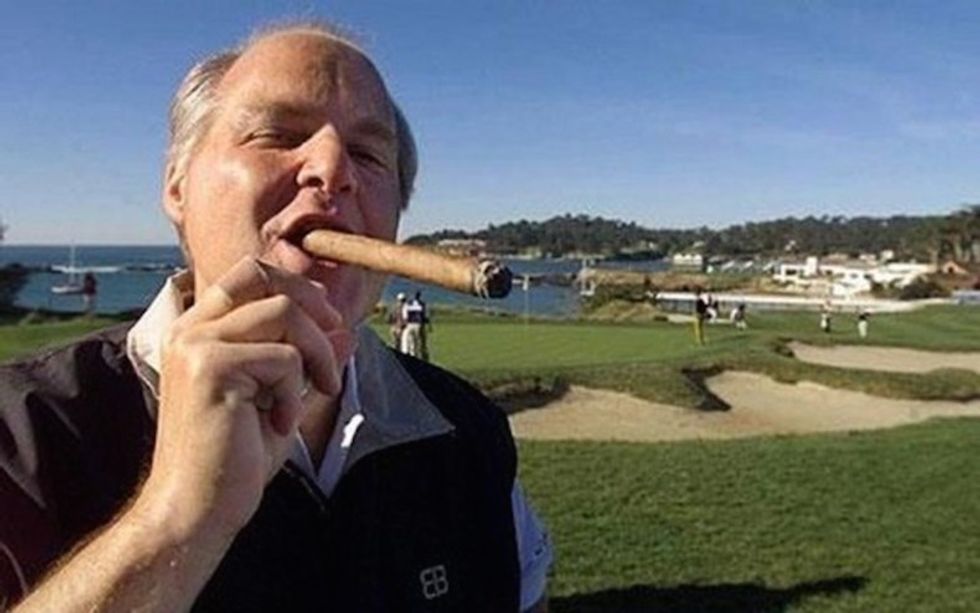 Prepare to push your twin beds together, Mr. and Mrs. John Q. Public, because Rush Limbaugh is here to give you some completely unsolicited sexxx tips on how to be sexxxy! Rush (and presumably the three former Mrs. Limbaughs) knows a thing or two about sexual disappointment, so his remarks about consent should be considered in the proper context. That context, according to Media Matters, is that Rush Limbaugh was talking about Ohio State's new consent policy that "takes all the romance out of everything," which is unfortunate because "seduction used to be an art. Now of course it’s prudish and it’s predatory and it’s bad." And oops, we have just vomited all over our keyboard.

How many of you guys, in your own experience with women, have learned that "no" means "yes," if you know how to spot it?

And all across America, pale chubby hands with fingers like sausage links shot into the air!

I'm probably -- let me tell you something -- in this modern -- that is simply -- that's not tolerated. That would not be -- people aren’t even going to try to understand that one. It used to be it was a cliche. Used to be part of the advice young boys were given. But see, that's what we have gotta change. We have got to reprogram the way we raise men.

Here's the video, in case you want to feel gross in your bathing suit areas.

To be fair to El Rushbo (we are nothing if not fair), Dan Savage has made superficially similar arguments: that functional relationships usually require a level of emotional intelligence, and that if you have a modicum of emotional intelligence, you probably don't need to explicitly ask "Do I have your consent?" before you take off your fedora and start fumbling with a lady's bra strap. And for experienced BDSM players, there are ways to actually allow "no" to mean "yes," provided you've discussed the arrangement ahead of time and are using a safe word (the official safe word of Wonkette is "PT Cruiser").

But tell us, America, are you really turning to flabby sack of human garbage Rush Limbaugh for advice on the kinkier aspects of human sexuality? Do you really need to spice up your love life with tips from a man who brings 29 Viagra tabs with him on a short trip to the Dominican Republic? Hey Rush, if you're such a good sex advice guy, then how come you can't even make a boner? Something something "tug on those bootstraps, buddy," are we right?

Thinking about Rush Limbaugh and sex at the same time makes us feel gross, the end.