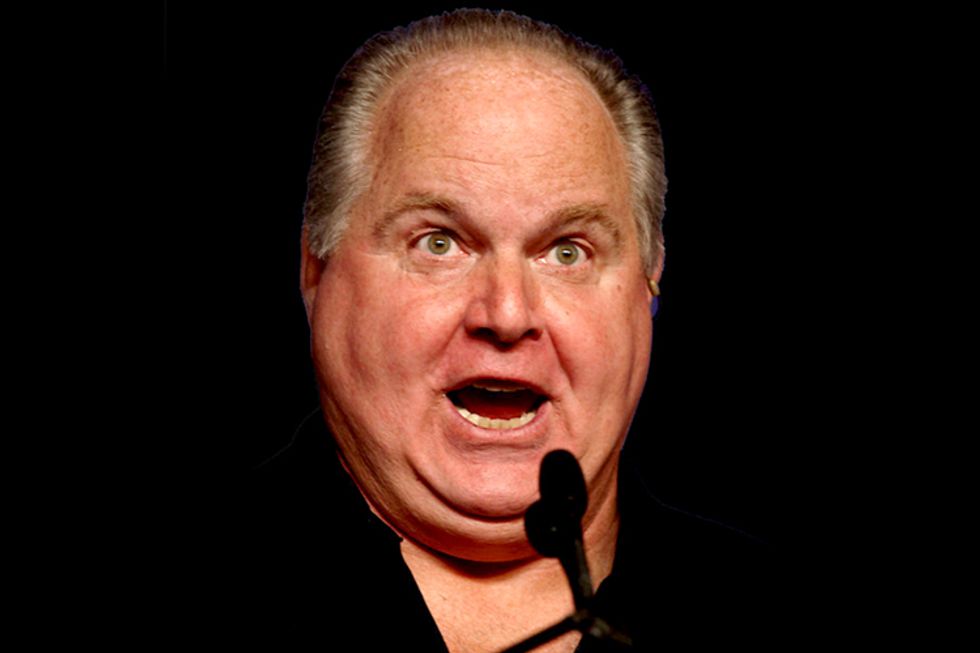 Rush Limbaugh's legal team is taking its completely serious defamation case against the Democratic Congressional Campaign Committee to the most important court in wingnut alternate reality: Fox News. On Hannity Monday, attorney Patty Glaser explained why quoting Rush Limbaugh verbatim is actually defamatory, because he also said some other stuff -- sarcastically, but he said it. So shame on those uncivil Democrats!

Just to review, on his Sept. 15 show, Limbaugh took issue with a new sexual assault policy at Ohio State University, explaining that if men have to actually hear a woman say "yes" before boning them, then romance is dead and their prospects for a happy fourth marriage will be severely reduced. Darn it, the whole point of romance is to get into an unwilling girl's pants, as Limbaugh explained. But now those Ohio State prudes have just ruined everything about the danse macabre that Limbaugh considers human mating rituals. You see, "“seduction used to be an art. Now of course it’s prudish and it’s predatory and it’s bad.” Then Limbaugh asked for a show of Cheeto-stained hands:

How many of you guys, in your own experience with women, have learned that “no” means “yes,” if you know how to spot it?

That there is the sentence that the DCCC supposedly defamed Limbaugh by quoting in a fundraising letter. Why is it defamatory? You see, right after that, Glaser explained, Limbaugh made clear that Limbaugh recognizes that "no" doesn't mean "yes" anymore, because he clearly said "We have got to reprogram the way we raise men," and that means that he's in favor of men changing their attitudes, not mocking feminists for trying to do that.

It must be fun to go to law school on Mars, where no one ever uses sarcasm.

Glaser was disgusted that anyone would use Rush Limbaugh to drive fundraising (or pageviews, we bet!), especially by quoting him without that important context, and solemnly noted:

Yes, Rush Limbaugh's attorney is insisting that hyperbole and stretching (of the truth, though maybe he's against all physical exertion) are bad things. "Shame on them!" she intoned. Also, Glaser explained that the DCCC letter met the standard of "malice" necessary for proving defamation against a public figure, because obviously he never meant that thing that he totally said; he was actually just sadly recognizing that men can't enjoy being manly any more.

“It is so damaging, whether it’s Republican or Democrat,” Glaser said. “You’ve got to be more responsible. You can’t maliciously attack people.”

Yep. Rush Limbaugh's attorney is firmly against maliciously attacking people. Has she actually noticed what his business model is?

Maybe when Rush calls someone a slut, it's out of public-spiritedness, not malice. Or maybe when he says that a time-traveling Barack Obama tanked the economy in the spring and summer of 2008 by getting elected in November, he's simply exercising a Tralfamadorian understanding of time and causality, not maliciously twisting history. Our maybe when he accused Michael J. Fox of faking Parkinson's symptoms to garner sympathy, he was driven only by a steadfast devotion to respecting real cripples, who aren't liberals. And heaven knows, when he suggested that Valerie Jarrett secretly gave all the orders during Benghazi, that wasn't malice, that was just pure pigshit ignorance.

Fine, we'll give him that last one.