Russia Tired Of Snowden, Says He Can Have Freedom If He Shuts Up Already 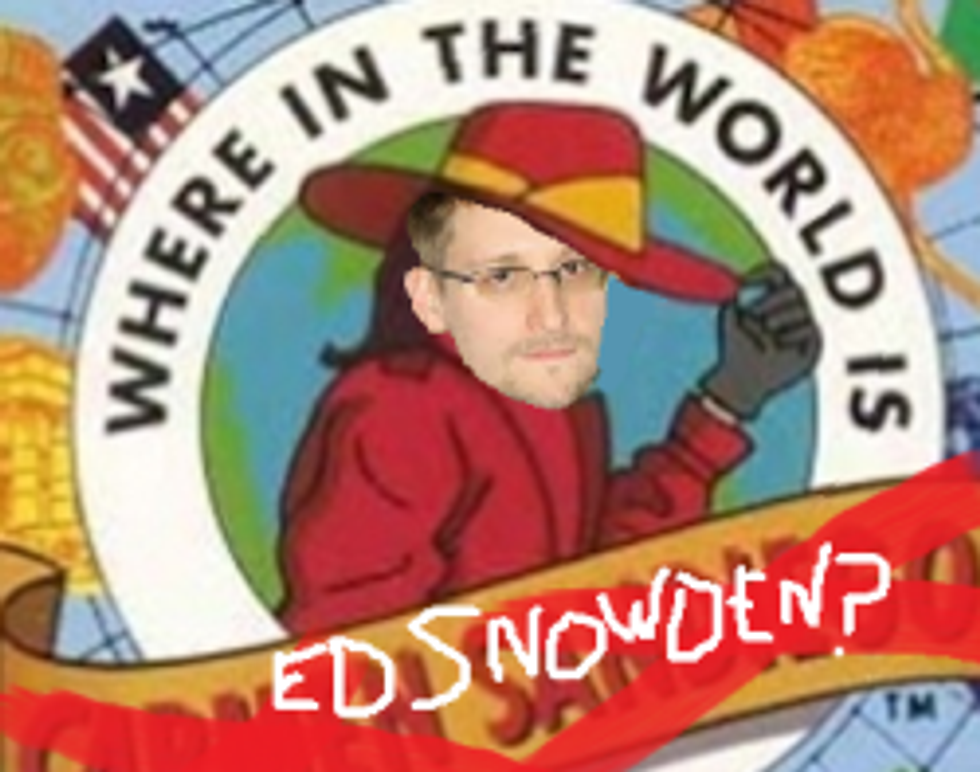 It is time once again for another round of our new favorite game, Where in the World is Edward Snowden? Last we heard of our intrepid hero, he was still stranded in the transit zone of the Moscow airport, subsisting on Cinnabons while growing more and more frustrated that Hudson News is always slow to stock the latest issue ofUs Weekly. Rumors that the president of Bolivia had stuffed him into a carry-on and smuggled him aboard his own flight fell apart when the world learned that the president’s plane had actually taken off from a different Moscow airport. Three South American countries have offered him asylum but flying to any of them from Moscow presents certain logistical problems.

Today Wikileaks announced that Snowden will formally apply to Russia for temporary asylum so he can at least get the hell out of the airport’s transit zone. This is his second appeal to the Russians; he rejected the first when Vladimir Putin attached the condition that Snowden stop leaking like the Titanic. Say what you want about the Obama administration, but Vladimir Putin really does not like corruption seeing the light of day.

This time Snowden says he will accept Putin’s conditions. Maybe he’s getting desperate now that he has been stuck in limbo for a while (technically the transit zone is international territory so the Russians can’t extradite him as the U.S. has requested) and his backup plan of appealing to Nightcrawler to teleport him out of there has been met with a stony wall of silence from the X-Men. Whatever the reason, if Russia accepts his request we will finally have some movement on this tale of woe. Of course if Snowden turns out to be a gay tourist the movement will be right to Lefortovo Prison, but such are the risks one takes when one seeks freedom in Mother Russia.

This is the danger of following certain strains of the libertarian philosophy, where a person’s thinking that he should be free of government interference to do what he wants runs smack into the reality that we live in nations governed by laws because otherwise everything would be chaos, and that dislike of a law, no matter how strong and heartfelt, does not make one exempt from having to face the consequences for breaking them no matter how much you may scream “asylum” and portray yourself as a latter-day Robert Redford in Three Days of the Sharknado or whatever, forever on the run from shadowy government forces who will, on orders from the highest levels of the federal government, contract with global crime syndicates to rub you out, because dude, how much dope were you smoking while you were living in Hawaii and haunting Ars Technica chat rooms?

Yr Wonkette anticipates a hiding from some of you over our mocking tone, but we maintain that it is possible to both not like what the NSA has been doing (though we were totally unsurprised that it had been going on because this is the world we have lived in for at least a decade if not longer) AND to think that Edward Snowden is a preening drama queen who did not think his whole plan through very carefully. If he had, he would actually be free somewhere, quietly living his life while debate rages over the issues he raised. Instead he is stuck in an airport relying on Julian Assange, a man not exactly adept at keeping the spotlight on the issues. Good luck with that, dude.