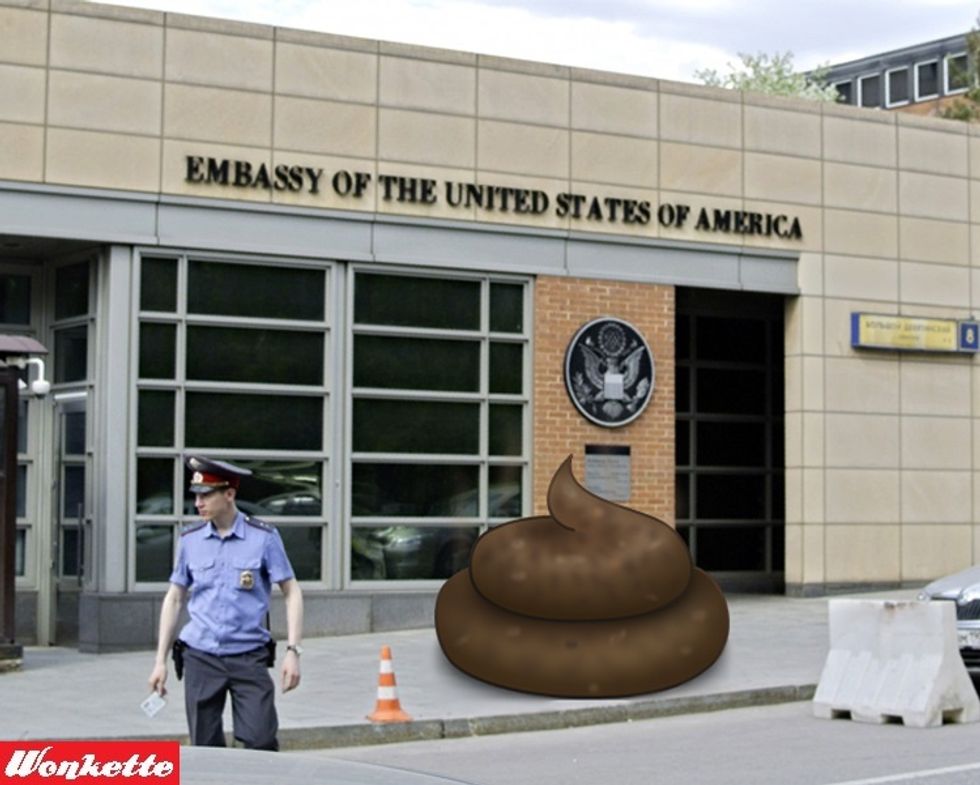 International relations took a gross turn this week: the Washington Post's Josh Rogin reports on a Russian campaign of harassment and intimidation against American diplomats in Moscow and eastern Europe. There's some pretty scary shit going on, from the truly frightening -- Russian intelligence agents very obviously shadowing diplomats' children -- to the bizarrely dickish -- diplomats saying their houses have been broken into and the furniture rearranged. And pooping on the carpet, which tied the whole room together, man:

Some of the intimidation has been routine: following diplomats or their family members, showing up at their social events uninvited or paying reporters to write negative stories about them.

But many of the recent acts of intimidation by Russian security services have crossed the line into apparent criminality. In a series of secret memos sent back to Washington, described to me by several current and former U.S. officials who have written or read them, diplomats reported that Russian intruders had broken into their homes late at night, only to rearrange the furniture or turn on all the lights and televisions, and then leave. One diplomat reported that an intruder had defecated on his living room carpet.

As of yet, no diplomats have had marmots thrown into their bathtubs, but these guys are pretty nasty. Might even be nihilists. Secretary of State John Kerry has asked Vladimir Putin to knock it the hell off. It's unclear how Putin responded, though we wouldn't be the least bit surprised if Kerry found a piece of paper reading "Ударь меня" taped to his back when he left.

The harassment tends to be the worst in Moscow; paid protesters used to follow former ambassador and now-ubiquitous MSNBC consultant Michael McFaul around the city, and his children were followed to school by intelligence agents. And it's not all just frat boy shenanigans: During President Obama's first term,

Russian intelligence personnel broke into the house of the U.S. defense attache in Moscow and killed his dog, according to multiple former officials who read the intelligence reports.

Then again, frat boys and their pals are capable of some pretty twisted shit, too. Things have gotten worse for diplomats and embassy staff across eastern Europe since the Russian invasion of Ukraine and the imposition of sanctions; State Department press secretary John Kirby calls the harassment campaign part of a "gray war" against U.S. and European countries participating in sanctions. State has been providing additional training on handling the harassment to all staff going to European postings and holding interagency meetings to track and respond to the incidents.

The Russians, of course, insist they're only responding to "U.S. provocations and mistreatment of Russian diplomats in the United States," because Russia is the Donald Trump of nations. A Russian Embassy spokesman sent Rogin a statement explaining that they only punch back when they've been treated unfairly:

“The deterioration of U.S.-Russia relations, which was not caused by us, but rather by the current Administrations’ policy of sanctions and attempts to isolate Russian, had a negative affect on the functioning of diplomatic missions, both in U.S. and Russia,” the spokesman said. “In diplomatic practice there is always the principle of reciprocity and, indeed, for the last couple of years our diplomatic staff in the United States has been facing certain problems. The Russian side has never acted proactively to negatively affect U.S. diplomats in any way.”

We're quite able to believe America plays similar games, but we'd really like to believe we aren't killing Russian officials' pets. (We could be blind optimists on that count.) A former American official says the Russian intelligence service is way worse than anything our people are doing:

Evelyn Farkas, who served as deputy assistant secretary of defense for Russia, Ukraine and Eurasia until last year, said that there is no equivalence between whatever restrictions Russian diplomats are subjected to in the United States and the harassment and intimidation that U.S. diplomats suffer at the hands of the Russian security services. The fact that the Russian government stands accused of murdering prominent diplomats and defectors in European countries adds a level of fear for Russia’s targets.

“When the Russian government singles people out for this kind of intimidation, going from intimidation to harassment to something worse is not inconceivable,” Farkas said.

Look, we just wanted to make some jokes about pooping on the rug and speculating that maybe the SVR had recruited prize-winning journalist Chuck C. Johnson. But a lot of this crap isn't funny. Except for the crap crap. We simply wanted to stick to saying it's a good thing the carpet pooping didn't happen outside on the front porch in the winter, because no diplomat should have to try to defuse a Russian icy BM. Is that too much to ask?

It's like your mom always said: It's all fun and games, until an enemy of the regime gets assassinated in broad daylight and no one saw anything.