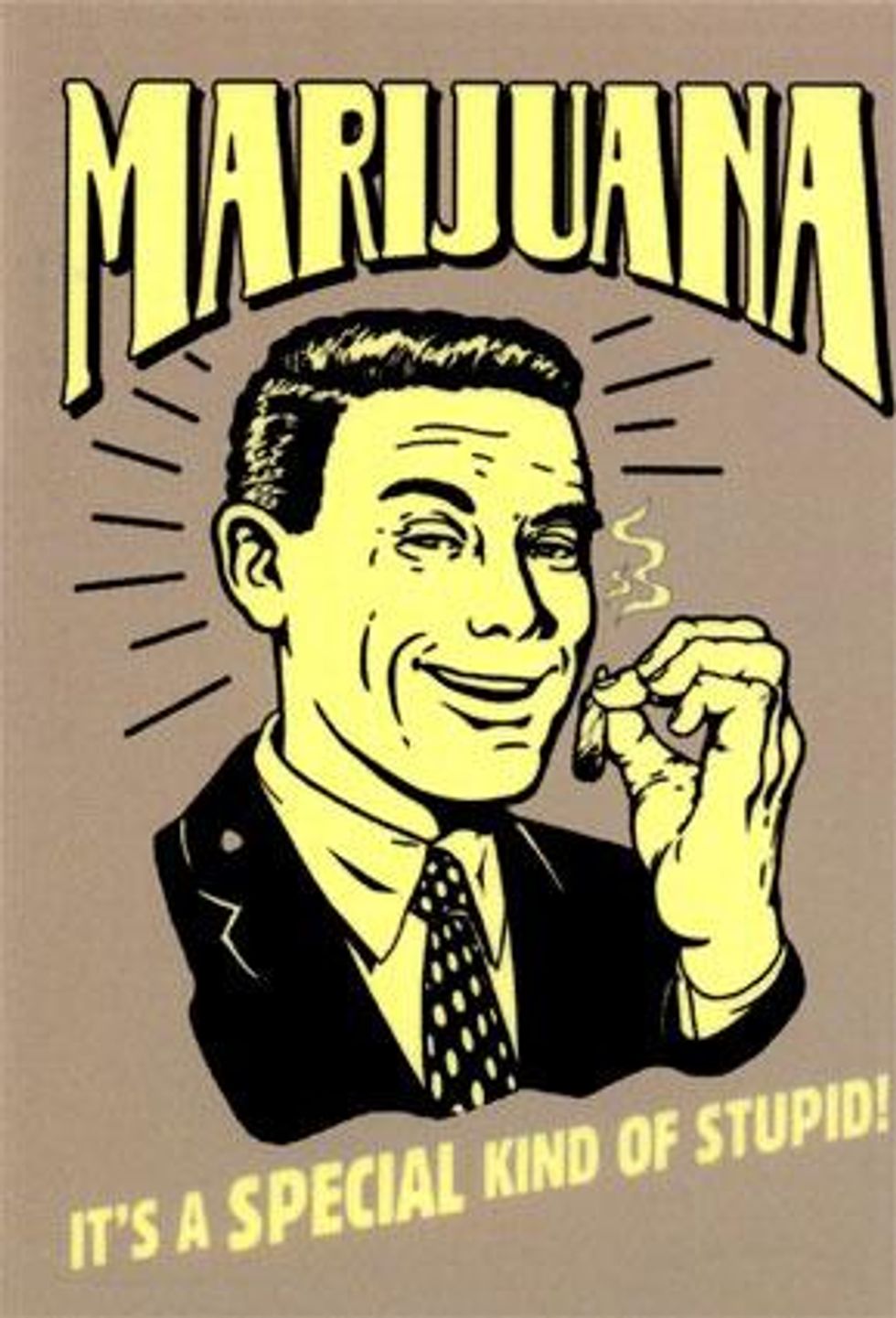 Wow,Gary was right! Leggy CNN Idiot S.E. Cupp truly has taken the lead for the dumbest column of 2014, and it's going to take some massive expenditures of PunditDerp to surpass her thought-like statements about marijuana. It's also depressing to know that someone will pull it off anyway. If nothing else, it at least proves that pot can make some people stupid even if they don't ingest any at all.

So here's the dealio: Cupp believes that marijuana legalization could turn out to be a very bad thing for liberals, because it's wildly inconsistent with other parts of the progressive agenda -- or at least "the progressive agenda" as imagined by S.E. Cupp's strange libertarian mind.

The same argument used against guns is used for pot: that legalizing pot and making it more available will reduce crime. No good liberal would say the same of guns, though there is substantial evidence to prove more guns equal less crime.

We're told pot users will "responsibly" use marijuana in the privacy of their own homes. But what barometer are they using to determine that persistent recreational drug users, who have presumably broken the law before by possessing marijuana, are responsible people? And why aren't lawful gun owners afforded the same level of trust?

If progressives want to keep gun control in the crosshairs - and many have said they do - they'll have to reconcile this intellectual incongruity.

Yes, they certainly will have to do something about this massive pot-smoking straw gunman. Leaving aside the seriously questionable statistical fuckery of the more guns = less crime claim, and let's also just stare blankly at the pure stupidity of Cupp's dopey attempt to make a point with a definition -- riiiight, since pot users were all engaged in criminal activity before the stuff was legalized, they are obviously untrustworthy. Also, too, many people jaywalk, so they should not be allowed to vote. Or something. Lawful gun owners have a pretty well-established record of accidentally shooting themselves and others, which one might think would be an argument, at the very least, for requiring safety training, but that is obviously an unconstitutional infringement. And while, yes, irresponsible pot use combined with driving can be just as bad as drunken driving, we don't know of any innocent bystanders getting a load of Maui Wowie shot through their skulls when someone cleaned a bong that they thought was unloaded. But sure, we would love to see guns regulated at least as strictly as legal weed in Colorado and Washington.

Let us continue. Cupp also thinks that the pro-pot agenda conflicts with the "expansion of the health nut state":

does it really work to rail against trans fats and restrict the smoking of cigarettes but allow pot smoking (and the sloth and munchy-induced snacking that comes with it)?

Again, this is about as sophisticated an argument as the old "Michelle Obama ate a big ol' hangerburger, wotta hypocrite!" thing. Alcohol abuse is also bad, and yet many liberals drink their white wine spritzers, or whatever the elitist yuppies are imbibing these days! But yes, we all know that there is no such thing as moderate pot use, as illustrated by the stoned ramblings of notorious weedhead David Brooks. Somehow, we think the contradiction, if any, between encouraging healthy eating and allowing a bit of herbal entertainment is just a teensy bit less of a logical inconsistency than, say, the tendency of conservatives to call for a tiny little government that's just big enough to fit inside a transvaginal wand.

And then Cupp gets to her most exciting claim -- what if Obama's decision to not interfere -- much -- with state pot laws actually works, what then, huh, you big-government liberals?

A successfully-delivered state-run program would send a clear signal that government functions more effectively at the smaller, local level and that federal bureaucracy, whether in drug enforcement or, say, health care, can only muck things up ...

If pot legalization emboldens libertarianism in just such ways, it would have a pretty devastating effect on progressivism.

Uh... wut? That might be a really persuasive argument if libruls truly insisted that no policy ever be set at the state level, but Cupp appears to have once again confused cartoon progressives with the real kind. We're just a little surprised that she hasn't also exposed the incredible hypocrisy of liberals wanting to combat CO2 emissions, but nevertheless wanting to allow people to burn dried cannabis leaves.