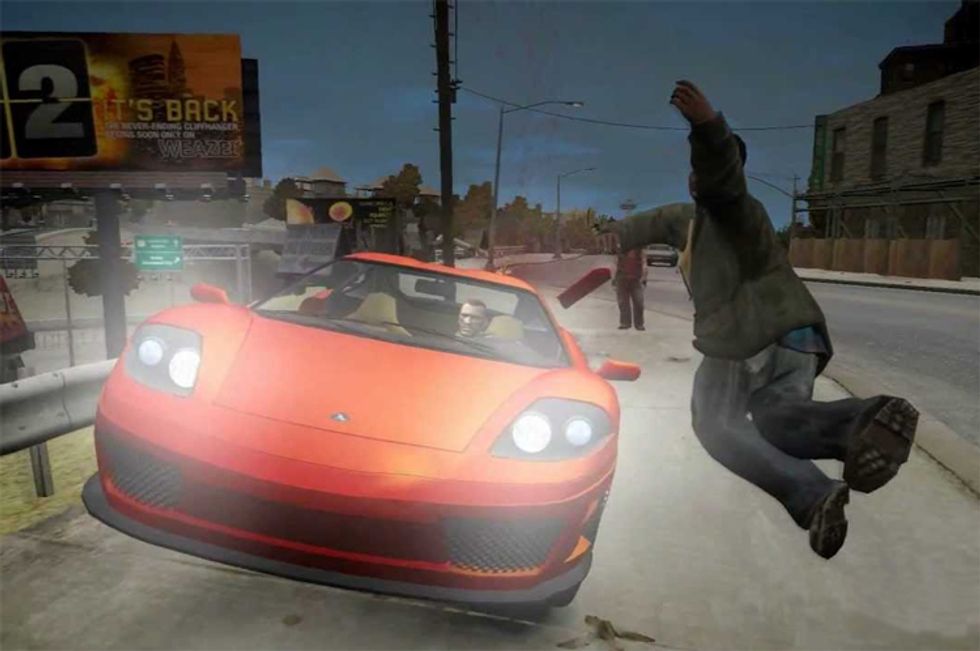 Imaginary driver on closed videogame course. Do not attempt.

Saturday night, an SUV driven by a Sacramento County sheriff's deputy struck a 61-year-old woman protesting the police killing of Stephon Clark, then drove off without stopping. Witnesses and the victim, Wanda Cleveland, described the incident as a hit-and-run, although perhaps if they'd looked closer at the vehicle they'd have seen it was clearly marked "To Inflict And Sever," so that should have been fair warning.

The SUV hit Ms. Cleveland in her right leg and knocked her down; she was treated at a local hospital for injuries to her arm and the back of her head, then released. The Washington Post has this video of the police vehicle hitting Cleveland:

Cleveland was hit by the second of two SUVs; after the vehicles were surrounded by protesters who were banging on the car, a deputy inside said "Back away from my vehicle" over the loudspeaker. The first SUV begins moving away, and as the second one follows, Ms. Cleveland walks between the two SUVs and is hit. [There is disagreement even in the chatcave; Shy describes the car "shooting forward"; Dok sees an accident caused by seriously reckless driving. Regardless, the sheriff drives off.] A longer video posted by local station ABC10 shows fire and ambulance crews arriving about seven minutes later to take her to the hospital.

WaPo reports that earlier in the evening, Cleveland had said she had been arrested three years ago for touching a police officer at a City Council meeting:

“I’m on a mission now. I will never allow a cop to touch me again,” she said before the accident. Nearly an hour later, she was lying face up on a city street after being struck by the SUV.

“I want to know what he was thinking,” Cleveland said from her hospital bed in the emergency room. “Is my life not that important?”

She said that after the SUV struck her, she rolled away from it so she wouldn't be run over. Phuong Le, a friend who was at the protest with Cleveland and helped her after she was hit, said he thought the deputy driving the second SUV

was really upset, and he accelerated [...] He didn’t get everyone to comply and move, so he just hit her.

The Sacramento County Sheriff's Department issued a statement saying that all of this happened at "slow speeds" -- making it perfectly OK, obviously -- and pointing out that one of the SUVs sustained a whole lot of scratches and dents, not to mention a broken rear window, from the protesters. Maybe the vehicle felt its life was in danger and saw a protester with a phone, even.

Ms. Cleveland told the Sacramento Bee she thought there just might be a double standard at work:

He never even stopped. It was a hit-and-run [...] If I did that, I’d be charged. It’s disregard for human life.

OK, sure, but maybe she should have held off on demonstrating until there was a sports championship, which would make a bit of mayhem OK:

So #StephonClark protester Wanda Cleveland was hit by sheriff with his car & cops are in riot gear escalating the situation.

But in Philly & SF after team titles these fans are just ‘celebrating’...with no cops in sight. pic.twitter.com/jxRjj9b2mt

The incident was also caught on video by Guy Danilowitz, who was observing the protest and police response as a legal observer as part of a National Lawyers Guild project to document demonstrations and watch for civil rights violations. He told WaPo that videos like his would usually be held until a possible lawsuit or prosecution, but this incident "was so egregious that it was in the public interest to get it out":

Danilowitz said a civilian involved in a similar collision would possibly be charged with various crimes, including assault with a deadly weapon and violation of a state law that says drivers “shall immediately stop the vehicle at the scene of the accident.”

Other statutes say the driver must help arrange medical attention.

Danilowitz said it was "unusual to see potential criminal conduct by officers," which seems a bit optimistic, though maybe he just meant it in the vehicular sense. He also noted that since most dash-cam systems are activated when flashing police lights come on, there may be police recordings of the SUV hitting Ms. Cleveland, including conversations before and after she was hit.

The Sheriff's Office of Chelan County says it was an accident! You know, like hitting protesters with your car!

Get ready for the usual round of rightwing idiots -- including some in law enforcement -- insisting that protesters deserve to be run down because they're blocking traffic. That is definitely an offense deserving of immediate extrajudicial punishment, because now we are the Philippines. Maybe that sheriff's office in Washington that posted a funny "all lives splatter" meme about running over Black Lives Matter protesters last year will be inspired to offer its support for some fellow lawmen who took the advice.

Yr Wonkette is supported by reader donations. Please click here to keep the Wonkebago running as Yr Editrix treks to Oklahoma City to take pictures of the teachers' walkout. Teachers will strike, but will not be struck.