Sad Donald Trump Can't Kill All The Wind And Solar Power Just Yet :( 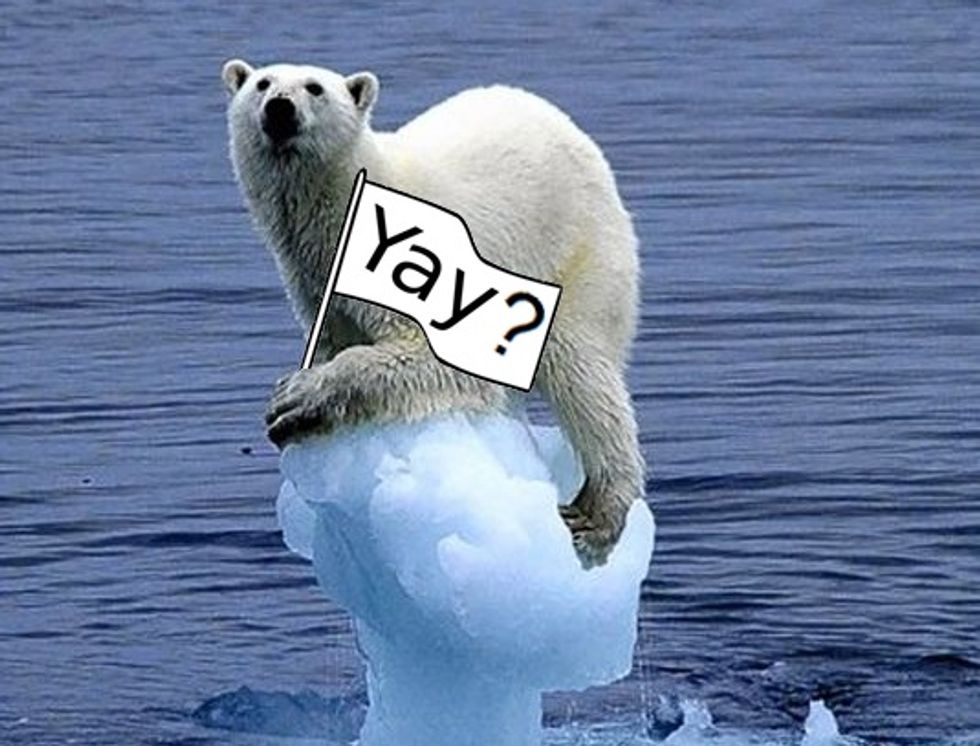 Let's only panic a little, then.

With Donald Trump filling his cabinet with climate change deniers and the Actual For Real CEO of Freaking Exxon as his choice for secretary of State, the next four years would appear to be really, really bleak for efforts to slow global warming and to reduce the nation's carbon emissions. And yeah, they probably will be, but the New York Times's climate columnist, Justin Gillis, had to go and hold out some hope for us to cling to: It's just possible that Donald Trump can't make science and efforts to address climate change vanish altogether.

As a for instance, Gillis points out that in December, even "after investors had had a month to absorb the implications of Mr. Trump’s victory," bidding in a federal auction for a section of the Atlantic seabed off New York, a potential location for an offshore wind farm, went through multiple rounds, and the tract eventually went for "$42 million, more than twice what the government got in August for oil leases -- oil leases -- in the Gulf of Mexico." The winner was the Norwegian state-owned oil company, which is trying to shift its emphasis from fossil fuels to becoming a major player in renewable energy. Says Gillis:

We do not know for sure that the New York wind farm will get built, but we do know this: The energy transition is real, and Mr. Trump is not going to stop it.

On a global scale, more than half the investment in new electricity generation is going into renewable energy. That is more than $300 billion a year, a sign of how powerful the momentum has become.

Huh! Those are some forces, those market forces! Gillis points out that wind power is expanding in the U.S., and that one manufacturing sector that's really growing well is wind turbines, "with the industry adding manufacturing jobs in the reddest states." It's projected that "wind farm technician" will be one of the fastest-growing jobs in the coming decade.

Gillis is no climate Pollyanna; he readily acknowledges,

In the worst case, with a sufficiently pliant Congress, Mr. Trump could roll back a decade of progress on climate change. Barring some miraculous conversion on Mr. Trump’s part, his election cannot be interpreted as anything but bad news for the climate agenda.

But Gillis suggests "despair might be an overreaction," given some of the systemic forces that could bog down Trump's attempts to take us back to a 100% coal- and oil-powered economy. For starters, he says, "the federal government actually has relatively little control over American energy policy, and particularly over electricity generation." The reason * coal-fired power plants are disappearing is that natural gas is much much cheaper, not because Barack Obama waged a war on coal. And while that relative lack of leverage over energy was frustrating to Obama and his hopes to push green power, it's now likely to

work to the benefit of environmental advocates. They have already persuaded more than half the states to adopt mandates on renewable energy. Efforts to roll those back have largely failed, with the latest development coming only last week, when Gov. John Kasich of Ohio, a Republican, vetoed a rollback bill.

Yes, federal subsidies for renewable energy are scheduled to be phased out over the next five years, thanks to lobbying from the oil industry, but any attempt to make them vanish sooner could face opposition from Republicans in states with a lot of wind power -- like Chuck Grassley from Iowa, where almost 40 percent of the state's energy is generated by wind. Tom Kiernan, who heads the American Wind Energy Association -- a wind industry group, not a bunch of tree-hugging hippies -- says Grassley "has been and continues to be an extraordinary leader and champion for the wind industry." Kiernan told Gillis the industry projects $80 billion in new growth over coming years, and said, “We are creating jobs throughout America, good-paying jobs, and we think President-elect Trump will want that to continue.”

Kiernan may be underestimating Trump's irrational phobia about wind power, which Trump hates because wind turbines ruin the view from his golf courses, and because, he claims (incorrectly) they're killing all the eagles. Yes, they kill some eagles, but not the "hundreds" Trump claims. If you want to get all technical about it, big glass skyscrapers, like the kind Trump loves to slap his name on, kill many, many more birds. Unlike the Dude, wind turbines don't hate the eagles, man.

Governor Moonbeam is back, and he rocks.

That said, Trump can still do plenty of damage, especially if he eliminates U.S. payments to the UN fund to help poorer countries develop renewable power and adapt to the effects of global warming. He can also ignore America's commitment under the Paris agreement to reduce carbon emissions, even with the progress being made by states and by renewable energy companies. Says Gillis:

So as Washington goes into reverse gear on climate policy, seas will keep rising and heat waves will get worse. Later this month, global monitoring agencies are expected to report that 2016 was the hottest year in the historical record, beating out 2015, which beat out 2014.

If nothing else, the next four years may be a fascinating test of just how far politics can become divorced from physical reality.

Go Solar For Christmas, Even If You Live In A Cave! It's A FESTIVUS MIRACLE!

Here comes the sun -- and you can harness its mighty power!

Switch To Clean Energy, Help The Earth And Your Wonkette All At Once With One Non-Weird Trick

Here's a company that's using the good ol' free market to expand the reach of clean wind power. You want to save the planet, don't you?

This is probably a good place to point out that you, dear Wonkers, can help move the needle on wind and solar power a bit yourself by signing up for clean power through Wonkette's energy partner, Arcadia Energy. Wind power here and Solar Power here. Think of it as a way to use your own energy dollars to tell Donald Trump where to cram his coal.

*Update/clarification: As alert Wonkette operative "whitroth" points out, coal mining jobs have mostly disappeared because mining companies have mechanized and switched to mining techniques like mountaintop removal, so they have fewer miners to pay, ruin the health of, and then toss aside when they get black lung disease.