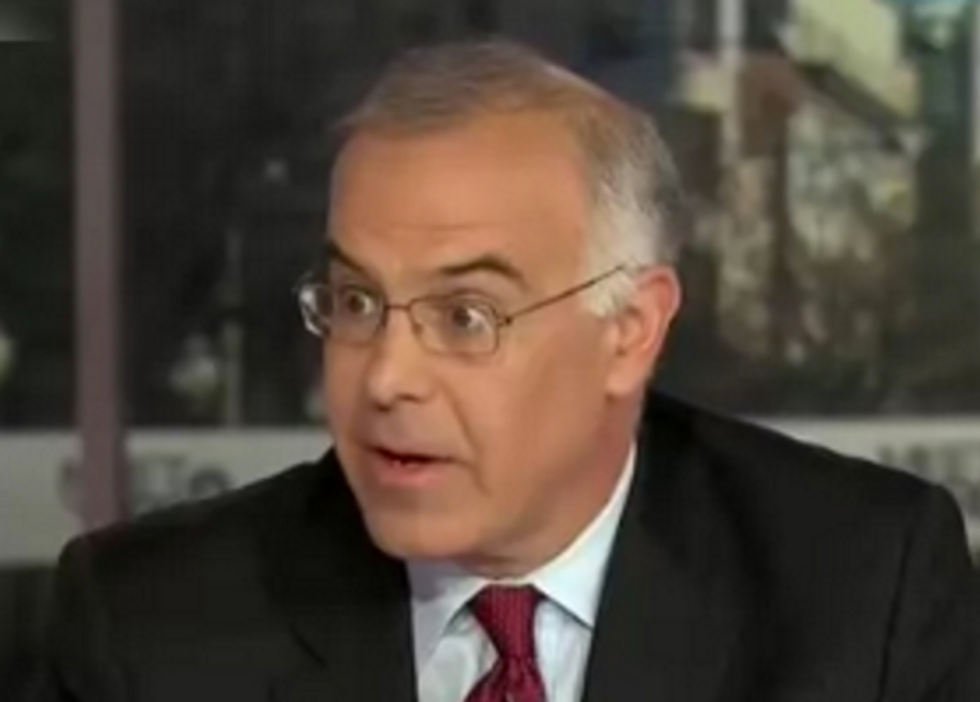 Sorry, but you missed the last call

Poor deeply depressed David Brooks. The New York Times columnist continues his embarrassing public display of utter despair at the decline of his beloved Republican Party, with this drunken rant from a bar:

It’s 2 a.m. The bar is closing. Republicans have had a series of strong and nasty Trump cocktails. Suddenly Ted Cruz is beginning to look kind of attractive. At least he’s sort of predictable, and he doesn’t talk about his sexual organs in presidential debates!

Well, Republicans, have your standards really fallen so low so fast? Are you really that desperate? Can you remember your 8 p.m. selves, and all the hope you had about entering a campaign with such a deep bench of talented candidates?

Oh, you thought we were kidding, didn't you? You could not have imagined Brooks was quite literally drowning his GOP sorrows, trying to find some reason not to call it a night just yet. Silly you. That'll teach you not to underestimate the depths of Brooks's desperation.

Brooks is knocking back shot after shot of 237-proof denial, and it isn't pretty. He knows the dreadfully uncouth dick-swaggering Donald Trump is ahead in the primary, with Ted Cruz and his "pagan brutalism" in second place. But if the party could just think back to an earlier time, when David Brooks's boyfriend Marco Rubio was the obvious best choice, according to people named David Brooks and no one else really, perhaps Brooks won't have to go home alone:

There is another path, one that doesn’t leave you self-loathing in the morning. It’s a long shot, but given the alternatives, it’s worth trying. First, hit the pause button on the rush to Cruz. Second, continue the Romneyesque assault on Trump. The results on Saturday, when late voters swung sharply against the Donald, suggest it may be working.

Oh yes he did say "Romneyesque assault." Such as the inspired, almost fiery (for Mitt) speech the twice-failed presidential candidate gave last week, about how unacceptable Trump is. According to Brooks's intoxicated fuzzy fantasies, it might be working! According to reality, maybe not so much:

Media and polling site Morning Consult has found that 31% of GOP voters were actually more likely to support Trump after Romney’s speech. Only 20% said they were less likely and 43% said there was no impact.

Even people who voted for Romney in 2012 didn’t care for his input this year, with 30% saying they were now more likely to vote for Trump after Romney’s remarks.

Assuming the Romneyesque assault fails to turn things around, Brooks has some more fever dreams that just might work:

Third, work for a Marco Rubio miracle in Florida on March 15. Fourth, clear the field for John Kasich in Ohio. If Rubio and Kasich win their home states, Trump will need to take nearly 70 percent of the remaining delegates to secure a majority. That would be unlikely; he’s only winning 44 percent of the delegates now.

And if a frog had wings, it wouldn't bump its ass a-hoppin'. And if your aunt had balls, she'd be your uncle. And if other things, then other stuff. But since Kasich is currently a few points behind in his own state, and Rubio is wayyyyyy behind in his home state, let's live dangerously and imagine those precious ifs don't come to pass. YOLO!

Thus, Brooks is left hoping the party will have no winners, only losers. Which is the most reasonable thing we have ever seen from Brooks. And then, at the Republican National Convention, after a bloody brawl that might well involve actual rivers of Republican blood:

It would be bedlam for a few days, but a broadly acceptable new option might emerge. It would be better than going into the fall with Trump, which would be a moral error, or Cruz, who in November would manage to win several important counties in Mississippi.

Ah, a new option could emerge from a brokered convention! Perhaps a Rubio-shaped one? Or a Romney-shaped one? So long as it isn't shaped like Trump's penis or the gaping black abyss in Cruz's chest where a heart should be. And then perhaps the party will be saved from itself after all.

This isn’t about winning the presidency in 2016 anymore. This is about something much bigger. Every 50 or 60 years, parties undergo a transformation. The G.O.P. is undergoing one right now. What happens this year will set the party’s trajectory for decades.

Brooks is suddenly concerned about the Real Americans -- the kind who eat at the Applebee's salad bar, no doubt, far from the elite coasts -- who have hijacked his dear moderate GOP, and the horror they might inflict upon his party, and the nation, unless some miracle occurs.

The hour is late and the odds may be long. But there is still hope.

No, David Brooks, there is no hope. The bar is closed, the lights are off, and all the pretty girls have paired off with Big Dicked Donald or Big Dick Cruz. And while you, David Brooks, might be DTF some imaginary moderate Republican candidate with imaginary broad appeal who can save the GOP from itself at 2 a.m., look around, pal, because you're the only one left here.