Sad Face: Wonkette Bread And Butter Michele Bachmann May Be In Trouble 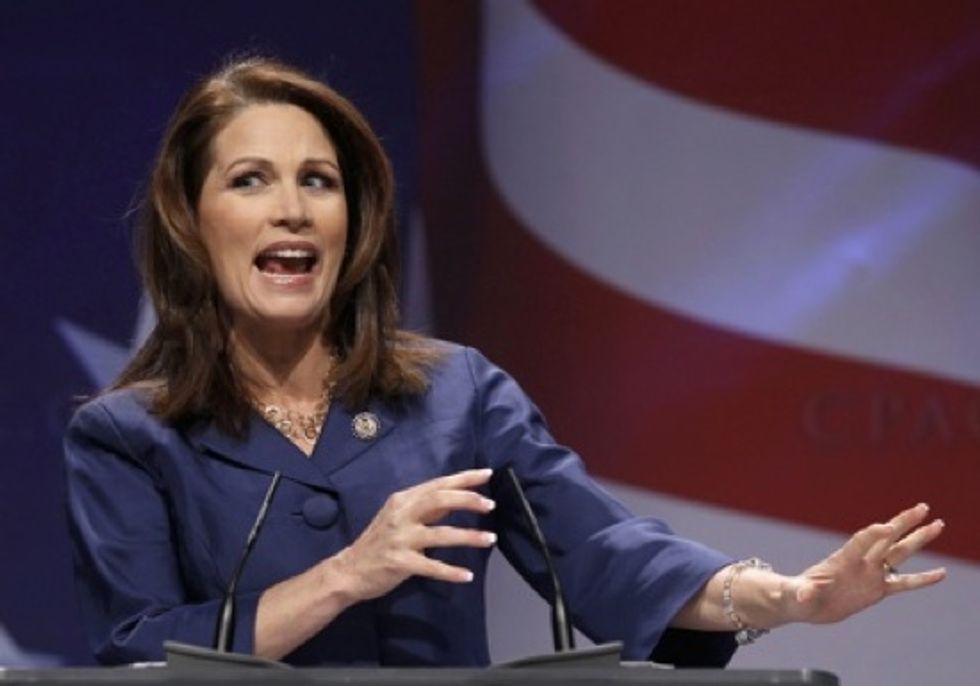 We'd really hate to jinx anything, so we are typing this with our fingers crossed: America's Craziest Legislator Michele Bachmann (R-Circular Ruins), despite the advantages of a fanatical national following and a very conservative district, just might not be a shoo-in for reelection this fall. (Also, OW! OW! OW! Do not try to type that way.)

While she still leads her opponent, hotelier Jim Graves, in most polls, that lead appears to be narrowing, and substantial percentages of Minnesota voters rate her performance in office as "poor." Bachmann's own campaign materials are portraying her as the target of "the national Democrat attack machine and liberal 'Super PACS,'" and WingNut Daily publisher Joseph Farah has issued an "Urgent plea for support of Michele Bachmann," explaining that

She is extremely smart, articulate, sincere, honest, principled and maintains unshakable core convictions about preserving America’s heritage of constitutionally limited government and the rule of law rather than the rule of men.

And she stays crunchy, even in milk! Farah, who normally can't stand class warfare, warns that Bachmann's opponent is a "fat-cat multimillionaire who will spend whatever it takes to defeat Bachmann in his effort to return Pelosi to the position of speaker of the House," and closes by exhorting readers beaten down by the Obama economy that if they can't donate cash, they should at least "pray earnestly for her victory."

Still, at least Bachmann shares with her constituency a wild-eyed fear of the Islams, right? That's got to be working out pretty well for her, what with the scary Islams actually rioting and so on? Apparently not entirely! A pro-Bachmann PAC ran an ad accusing Jim Graves of being too darn naive about the scary infiltration of Islam into our drinking water, and while it's unclear how much it might have helped Bachmann, it definitely helped Graves: when the ad was featured on Daily Kos, it raised nearly $8000 for Graves:

The other fun Bachmann news this week is the revelation that, during the GOP primaries, Bachmann was so consistently divorced from reality that the Associated Press simply threw up its hands and decided it couldn't possibly fact-check everything she said. At a recent National Press Club panel, Jim Drinkard (really! That is his name! We like him already!), the editor who supervises fact-checking for the AP, acknowledged that Bachmann's bullshit often piled up to insurmountable levels:

“We had to have a self-imposed Michele Bachmann quota in some of those debates.”

After the session, Drinkard said that there wasn’t an actual numerical quota on Bachmann at the AP. It’s just that if the AP had gone back and vetted all her claims that looked dicey, the result would “overload” the debate story. “Often she was just more prone to statements that just didn’t add up,” said Drinkard.

Even so, it's not like Bachmann's tenuous connections to what most people call "reality" has hurt her in the past. After she called for investigations of the "anti-American" views of members of Congress (and then denied saying what she was clearly said, on tape), Bachman handily won her 2010 race against sixth-level druid Elwyn Tinklenberg, despite polls suggesting Tinklenberg and Bachman were tied, and the loss of GOP advertising funding.

Mere looniness has never held her back in the past, so while we're happy to send a few Ameros to Jim Graves' campaign (That is a linky to donate, right there!), we are also perfectly willing to believe that ol' Crazy Eyes is like a B-movie monster who can continue to pop up again and again to threaten a terrified populace, no matter how many salvos of facts and rationality get lobbed at her.