Sad Mississippi Lovebirds Just Wanted ISIS Honeymoon Of Their Dreams, Is That Wrong? 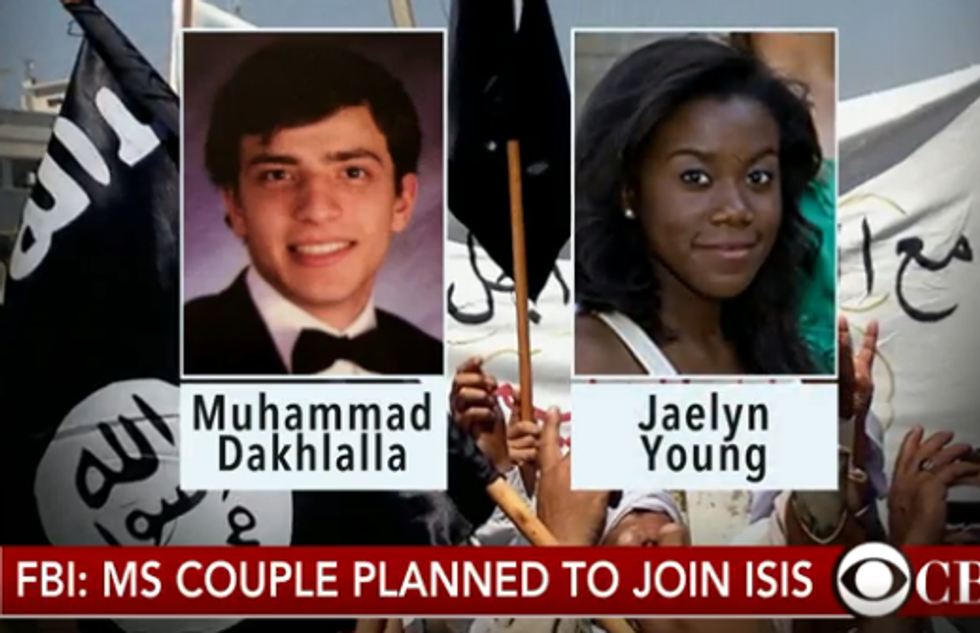 KIDS THESE DAYS. These two crazy Mississippi kids, Jaelyn Delshaun Young and Muhammad Oka Dakhlalla, had it all, or so they thought. They were in love, they got married, they had planned to fake a honeymoon but instead go fight with ISIS in Syria, they picked out this cute little house on the outskirts of town with a white picket, WAIT WHAT? Why you gotta do ISIS, y'all? What about "the beach" or "France" or "oh fuck it, we're poor, let's just drive to Memphis for the weekend?" Ugh, you idiots:

A newlywed Mississippi couple who were arrested on the way to the airport for a trip to Syria to join the Islamic State were ordered held without bail on Tuesday. [...]

The couple, Jaelyn Delshaun Young, 19, and Muhammad Oda Dakhlalla, 22, were on their way to the airport in Columbus, Miss., on Saturday when they were arrested by F.B.I. agents after unwittingly making travel plans with undercover federal agents on social media that included discussing a trip to Syria via Greece and Turkey as a honeymoon ruse.

It all went wrong, of course, because they picked the wrong honeymoon planner. Instead of checking Yelp or whatever and seeing who got five stars and super good "Allahu akbar!" sorta reviews for scenic terrorist getaways, they just went with the first person who said he was an ISIS recruiter on Twitter, what dumb amateurs:

“Our story will be that we are newlyweds on our honeymoon,” Ms. Young wrote in an email to a federal agent posing as an Islamic State recruiter, according to the criminal complaint. [...]

The authorities said the couple, from Starkville, Miss., boasted to the undercover agent that they were unlikely to encounter any trouble because the airport in Columbus, where they would catch a flight, had little security.

Well this is just no fun. "WORST ISLAMIC STATE HONEYMOON OF ALL TIME, MUHAMMAD," Jaelyn would say to Muhammad, but she can't because they are in the pokey, and probably not even in adjoining cells so they can play with each others' newlywed parts through the bars.

But Jaelyn, like, totally knew she would be really good at ISIS. She said she was real smart at chemistry, and wanted to be a medic, and then she told another of her "honeymoon planners" that she could, like, totally do social media for ISIS, like maybe a Pinterest, have you guys thought of a Pinterest? What about a Flipboard? It's a new thing, like Tumblr but for people who know how to read.

So they got caught, because they're dumb, and also the United States government is kind of ALL OVER THIS SHIT, perhaps because of dicknozzles such as these two.

And did nobody tell them they don't have to go all the way to Syria to do ISIS, since there are CLEARLY secret Walmart ISIS tunnels in Texas, and training camps in Mexico, and didn't President Obama just do a whole false flag military exercise called "Jade Helm," in order to greet all the ISIS-es and get them comfortably set up for the coming invasion of Texas? Texas is so much more convenient to Mississippi than Syria, we would think!

Anyway, great job, Mississippi. On top of the teen pregnancy and the poverty and everything else, you also create the dumbest homegrown terrorists. Add that to your "We're 50th place in everything!" quilt, how 'bout that, ya LOSERS? And keep those two dumbasses in jail for a long time, please.