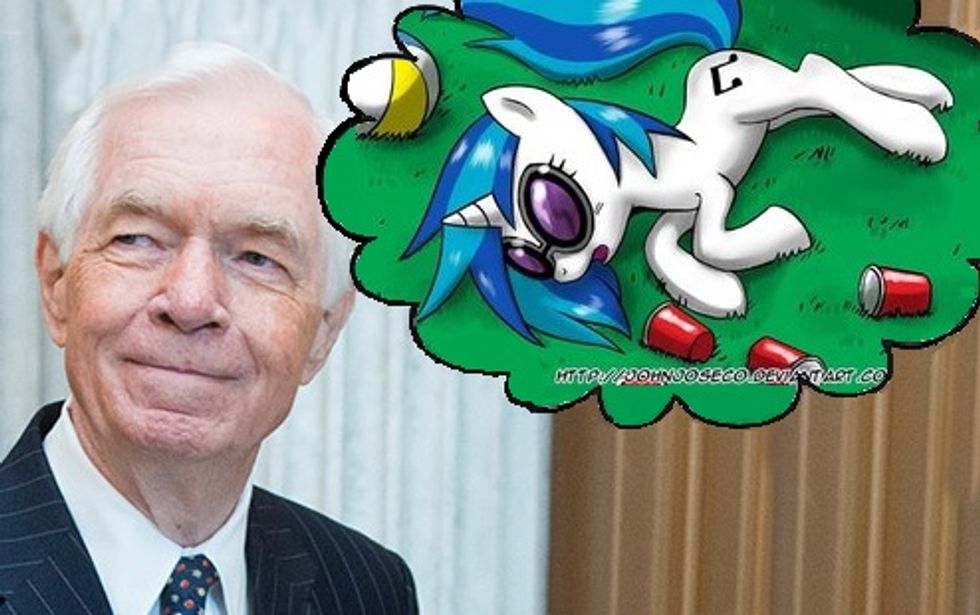 Well gosh darn it, Thad Cochran, you are just a good ol' fountain of fine video clips today, now aren't you? First we see that you have no idea who this "House Majority Leader" fella is wholost his primary -- Errant Condor, was it? And now there's this tape of you telling a bunch of nice folks in Hattiesburg about your animal-sexin' ways when you were but a wee tad of a Thad. Sen. Cochran, we do believe you have lost the thread somewhere, is what.

Cochran was fondly reminiscing to donors and supporters at Forrest General Hospital in Hattiesburg, Mississippi, talking about the good old days when he would come and visit his grandparents in the area:

“It was fun, it was an adventure to be out there in the country and to see what goes on,” he said of his boyhood visits to Hattiesburg. “Picking up pecans, from that to all kinds of indecent things with animals.”

“And I know some of you know what that is,” Cochran said.

This being Mississippi, it is not known whether a legacy of critterdiddlin' will actually hurt the Senator's chances in his runoff against state Sen. Chris McDaniel, who is no stranger to animal sex of at least a metaphorical kind, considering the suggestion that his campaign has engaged in ratfucking.

With this charming tale of life in the bucolic old South, Sen. Cochran also enters the pantheon of Great Southern Political Zoophiles, along with Georgia's Neal "Muleskinner" Horsely and... well, probably a lot of them, really.

Follow Doktor Zoom on Twitter. He has a Vinyl Scratch clopfic that can penetrate your very soul.