Sally Yates Knows What Is Unconstitutional And It Is Ted Cruz's Face! 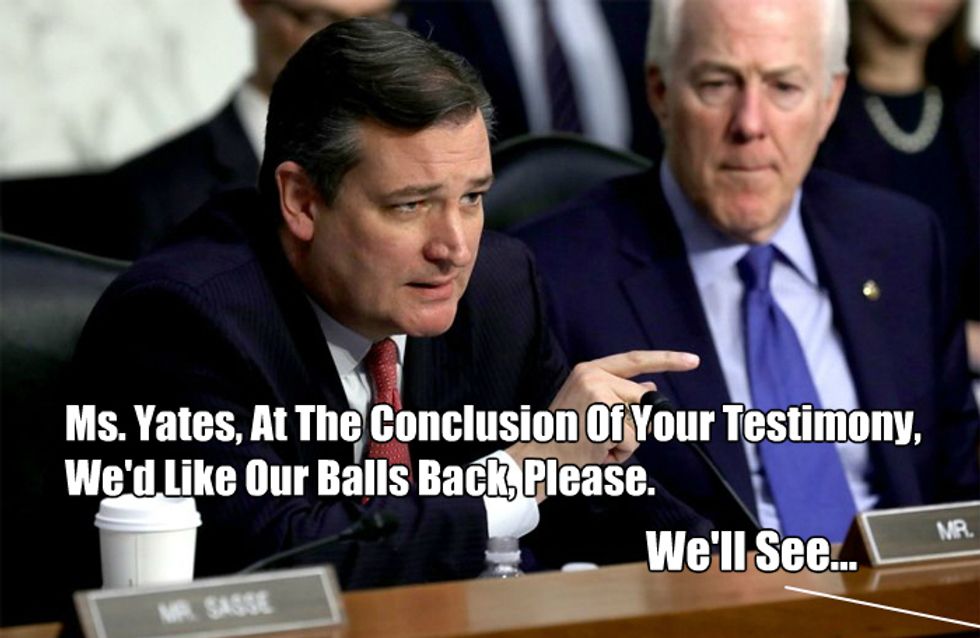 You may have thought, as we did, that yesterday's Senate Judiciary Committee hearing was supposed to be about the Trump administration's hiring and firing of former national security adviser Michael Flynn, but that's only because you're not a Republican on the Senate Judiciary Committee. (A Wonkette Golf Clap to Senator Ben Sasse, Republican of Nebraska, who said, "I thought this hearing was about Russia, but it appears my Republican colleagues thought it was about something else.") While most of the Democrats' questions to former acting Attorney General Sally Yates were about her warnings to the Trump administration about why Flynn was a possible blackmail target, since Russia knew Flynn had lied to the administration about his contacts with the Russian ambassador, Republicans wanted to get to far more important matters of national security, like who leaked the Flynn story to the Washington Post, or maybe why didn't Yates defend Trump's first Muslim ban, huh? And so they set off on a chase down some rabbit holes that may have impressed some wingnuts, but didn't actually have anything to do with the hearing's stated purpose. Yates didn't mind, and happily handed Texas senators John Cornyn and Ted Cruz their dumb questions back to them as lovely parting gifts.

John Cornyn got the off-topic ball rolling with a stern lecture to Yates about her refusal to defend her boss's perfectly legal executive order, which multiple courts found unconstitutional, an opinion shared by Yates.

Cornyn: I find it enormously disappointing that you somehow vetoed the decision of the Office of Legal Counsel...and decided instead that you would countermand the executive order of the President of the United States because you happen to disagree with it as a policy manner.

Cornyn had apparently completely forgotten that a "Texas Sen. John Cornyn" had grilled Yates at her confirmation hearing a couple years back on whether she would follow the Constitution and stand up to a president who asked her to defend an unconstitutional law. Happily, Yates remembered, and helpfully reminded him:

Yates: [You] specifically asked me in that hearing that if the president asked me to do something that was unlawful or unconstitutional, [...] would I say no? And I looked at this. I made a determination that I believed that it was unlawful. I also thought that it was inconsistent with the principles of the Department of Justice. And I said no. And that’s what I promised you I would do. And That’s what I did.

Oh. Well then, never mind? Cornyn followed up with a nonsensical question -- probably not hearing what Yates said -- asking why she would have refused to defend an order she'd just called "lawful." Yates replied, "No, Senator, I did not say it was lawful. I said it was unlawful.”

The real winner for stretching in that exchange is Dead Breitbart's Home For Rightwing Screaming, which seized on a minor part of Yates's reply to Cornyn. Unconstitutional? Unlawful? Forget it -- when Cornyn accused her of not defending Muslim Ban I because she disagreed on the order as a "policy matter," Yates prefaced her discussion of the order's legality by saying "it was not purely as a policy matter,” so Dead Breitbart yelled GOTCHA! and made that the headline:

When Ted Cruz had his turn, he went all over the place to grill Yates on anything other than her warning that Michael Flynn had been compromised by Russia.

We know you don't watch the videos, but watch this video, and watch shoot down Cruz again and again:

Cruz got things rolling by reading, in that voice of his that's perfectly pitched to make most mammals recoil and show their teeth, the text of the federal statute governing the president's ability to prohibit any aliens from entering the USA if he don't want 'em. Yates, who knows her immigration law just fine, thank you, replied that a subsequent revision to the law added the provision that "no person shall receive preference or be discriminated in issuance of a visa against because of race, nationality, or place of birth," and noted the courts had based their assessment of Muslim Ban I on "whether this more specific statute trumps the first one that you just described." And since the travel ban definitely discriminated on those bases, that's why she wouldn't defend the travel ban.

Cruz got all shirty, because how dare she question Ted Cruz's mastery of the law? And besides, the Office of Legal Counsel said the EO was just fine.

Yates explained that the Office of Legal Counsel hadn't assessed the constitutionality of the Executive Order, and so then Cruz had to interrupt her again, and get owned by her again:

Yates: I'm not, but I'm also not aware of a situation where the Office of Legal Counsel was advised not to tell the Attorney General about it until after it was over.

Cruz was left spluttering some stuff about how of course the AG might be left out of the decision-making process because of "partisanship," because of course Yates, a 27-year professional in government, got her last promotion under a Democrat, so what a partisan shill she was.

There's a new village idiot in town, y'all.

And then it was Louisiana Senator John Kennedy's turn to up the mean and stupid to a whole new level. That man is going to be a Wonkette STAR.

Yr Wonkette is supported by reader donations. Please click the "Donate" linky below so we can keep making fun of these idiots for you!