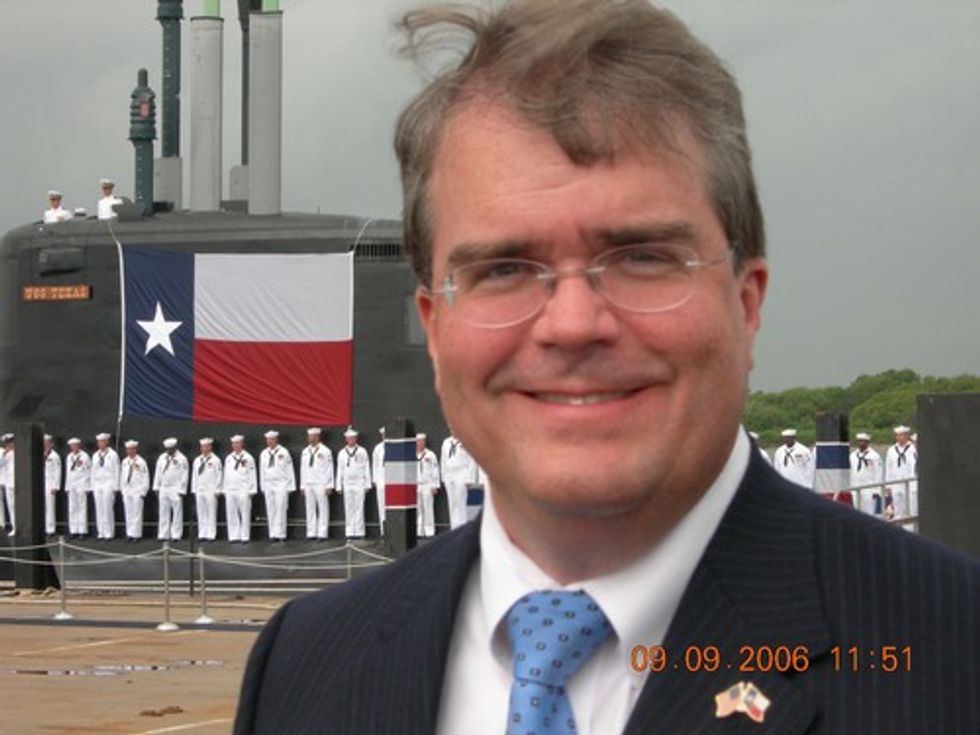 The other day webrought you the story of Texas Congresscritter John Culberson, who fired up House Republicans as they voted to kill Obamacare by cheering, “I said, like 9/11, ‘Let’s roll!’” After all, if you don't rush the terrorists and crash the plane, people might get used to having health insurance, which means the terrorists win. Salon's Josh Eidelson managed to get 15 minutes on the phone with Culberson, and shares a verbatim transcript of the conversation. It's worth reading the whole wretched thing, but here are a few highlights from the mind of a man who is very fond of "facts," which speak for themselves and do not need any spin.

Asked who's responsible for the shutdown, Culberson says that the "the answer to your question is self-evident," because while Republicans have offered four different approaches to kill or maim Obamacare, Barack Obama refuses to even meet them halfway and just cut off a hand or maybe a leg. Plus, he keeps hugging dictators:

And we get nothing. There’s no interest, nor response, in even negotiating. But he’ll negotiate with the lunatic dictator of Iran, the psycho in Syria, and the – you know, terrorists anywhere. But he won’t negotiate with democratically-elected representatives in the United States Congress.

After Culberson insists that it's an indisputable fact that Obama is willing to talk to terrorist dictators but not to Republicans, Eidelson notes that Obama actually did call Boehner (the interview took place prior to Wednesday's Oval Office meeting between President Obama and congressional leaders). Was the problem Obama's willingness to talk, he asks, or his willingness to make concessions?

I mean it’s just – it’s common sense. If you and I have, are working on, you know -- if I’m trying to buy your house, you sit down and you negotiate. Figure it out. They have said repeatedly they will not negotiate.

We might ask him what about if you're trying to turn a flamethrower on the house, but then you offer to only burn the garage? Can't we negotiate and just burn the roof? Somehow, Culberson suggests that Obama and Harry Reid are violating their oaths:

Where their oath of office requires them to follow the Constitution, which contains three branches of government, and we, all of us, have to negotiate and work together. And we’ve been ready, and we’ve been trying different approaches, and the response we get is no negotiation. So I think the facts speak for themselves.

See, Obama? The Constitution requires you to let us at least aim the flamethrower at you. Eidelson asks if Culberson is saying he thinks that Obama "has made concessions to the president of Iran" or to other bad guys, and we get some lovely arglebargle:

He shook hands – first time the United States President has shaken hands with the dictator of Tehran since 1979 is Barack Obama, and he did it right in the middle of when he was telling us no negotiation. I mean, these are facts, And you’ve seen the response is no negotiation. I mean that’s inescapable fact. Right? What am I missing?

He may be missing that it's an inescapable fact that Obama spoke to the Iranian president on the telephone and did not shake his hand. We are just guessing.

There's also an amusing back and forth where Eidelson asks whether, since Culberson wants to repeal Obamacare altogether, he also thinks insurance companies should be able to deny coverage for pre-existing conditions. Culberson first says, that's not what House Republicans are trying to do; they only want to stop, defund, or delay on everything that went into effect after October 1st:

Pre-existing conditions has been around for some time. Kids stay on their parents’ insurance until they’re 25, or 26, or whatever it is – that’s been the law. That’s untouched.

So do you want to repeal the Affordable Care Act though, or not?

It needs to be repealed and replaced to give the, to give American consumers the freedom to buy policies across state lines ... And we need to get the federal government the heck out of healthcare. It’s none of their business, it’s not in the Constitution, and it’s a violation of our most sacred right as Americans to be left alone.

So should the law allow companies, insurance companies, to deny people coverage because of pre-existing conditions, or not?

You can already take care of that. You can do that through a high-risk pool-type situation at the state level, as we do with automobile insurance ...

This is, again, inescapable facts. It doesn’t sound like it fits your narrative.

So the ban on denials for pre-existing conditions won't be touched, and it will be replaced by state-run high-risk pools because Americans want to be left alone. Possibly in a Schrödinger box that is inescapable and filled with facts.

Why can't the liberal media just see the facts, is what John Culberson would like to know. Let's roll!

Update: Editrix was at Rand Paul's Dumb Fucking Coffee Nonsense and when she got back she said we had stoled way too much of Salon's interview for fair use and stealing. So we have taken out the boring parts. You're welcome Salon!