San Bernardino Definitely Terror Attack, But We Don't Know Who To Bomb Yet 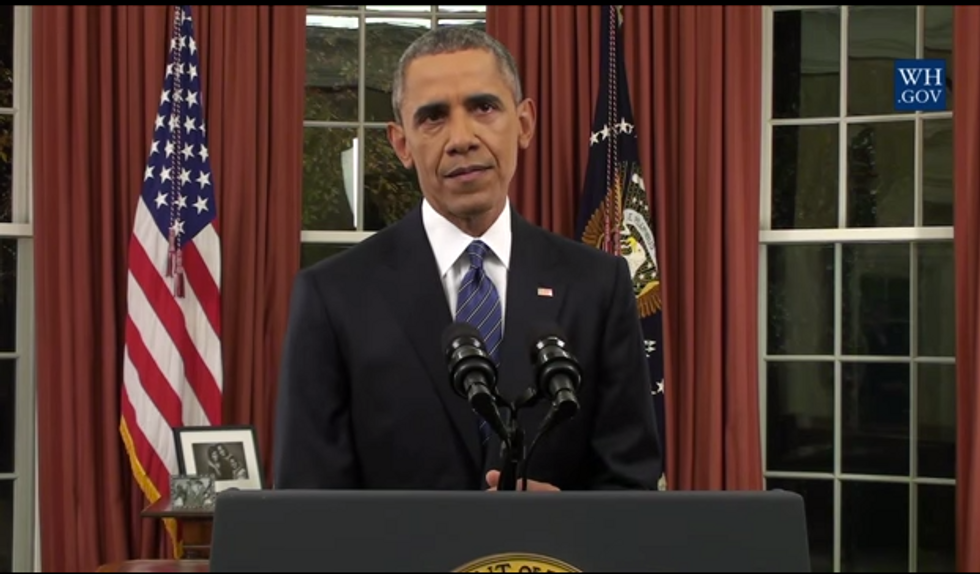 It was a really frustrating weekend for everyone who wants to shut down the mosques, deport the Muslims, and ban al Gebra from the schools, because while the FBI and other law enforcement agencies are definitely investigating the San Bernardino attacks as terrorism, darned if they're willing to jump in and say which online edition of the ISIS Jihad Funtimes Blog inspired Syed Farook and Tashfeen Malik to murder 14 of Farook's colleagues at a holiday party last Wednesday. This unfortunate official refusal to let speculation run wild -- accuracy be damned -- is at least balanced by vast numbers of terrorism experts who read Breitbart and know Political Correctness is what ultimately made the attacks possible. As of yet, the FBI has not yet sought a warrant to search Political Correctness's garage.

So let's jump once again into Wonkette's speculation-free review of what we know (a little more than on Friday) and what we don't know (a hell of a lot) about the terrorist attacks of Dec. 2. Please, Deleted Commenters, feel free to hop into the comments with accusations that by sticking solely to the facts as confirmed right now, Yr Wonkette is trying to make excuses for Radical Islam, which as everyone knows is lurking under every Bedouin.

Is Obama Finally Going To Start Bombing Everybody Named ISIS?

In a rare Sunday evening address from the Oval Office, the president spoke about the Wednesday attacks. He insisted we will defeat The Terrorists, even though he still refuses to call them Islamic Muslim Radical Jihad Holy War Terrorists. He did, however, specify some things we can and should do: bomb the bad guys; train Iraqis and Syrians to bomb the bad guys all on their own; get our allies to pitch in; stop suspected terrorists on the no-fly watch list from being able to buy guns, even though the Senate just last week voted again to protect suspected terrorists' Second Amendment rights, so yeah, good luck with that; and let's try to not be dicks to every single Muslim on the planet and insist this war is between the United States and Islam:

Obviously, such a declaration was immediately well-received by the right, who now understands that discrimination against Others is a bad idea and will not help us with the war. Obviously, we are making that up.

So Just How Deeply Involved In ISIS Were The Killers?

Funny thing, the FBI and Justice Department aren't saying Farook and Malik were ISIS operatives, although ISIS did claim Saturday the couple were "supporters" of the Islamic State. And even that claim was short of the usual boasts of responsibility ISIS likes to make for virtually every terror attack ever.

Again, I quickly add it is early. We’re still working very hard to understand but I want you to know that so far, we don’t see such indications.

On NBC's Meet The Press Sunday, Attorney General Loretta Lynch declined to say how exactly the couple had become radicalized:

You know, I think I can't say definitively right now, what led either of these two people to pick up guns and become murderers. I can say that that is the focus of our investigation. We're looking at everything we can find out about the two killers' lives [...]

While A.G. Lynch said there's no evidence at the moment, she also said, "You know, obviously, we have concerns whenever we see people who have large stockpiles of weapons, or appear to be in the process of accumulating weapons and ammunition." So let's put that one down as "they had more ammunition and pipe bombs than they needed for the one murderous rampage they did," but the FBI hasn't yet turned up any definite information about the couple's plans for the rest of the stockpile. Maybe they were saving up for Obama's inevitable declaration of martial law.

What Foreign Groups/Governments Were They Radicalized By?

God, we ask ourselves stupid questions. Again, no indication they were part of an organized larger group or network. At least not yet. Lynch also said on Meet the Press that investigators are working with "our foreign counterparts" to "learn as much as we can" about Malik's life, before and after she met Farook, and "frankly after she came here as well." Lynch added:

What we are trying to focus on, again, is what motivated these two individuals. What led them not just to commit the act, but to pick this particular place.

Lynch downplayed reports that Malik had been radicalized in a particular direction through social media interactions, again insisting it's too early to place too much emphasis on any particular report:

I think what you see with these comments from friends and family, and the information coming out from social media, is a small part of what we're doing, what the FBI is doing in gathering everything that we can find about her to build that larger picture [...]

I would caution people not to try and define either of these two individuals right now, because we do not want to foreclose either any avenues of investigation, or any other issues or motivations.

Obviously, no one is expected to listen to such caution, because certainly we have enough vague details to come to our own conclusions about what motivated the couple, don't we?

What About Those Dangerous Radicals The FBI Said The Couple Were In Contact With?

Comey and Lynch again cautioned it's too early to say how significant those contacts were. In his Friday presser, Comey said:

I have seen reporting where folks have focused on reports that they were in contact, at least one of the killers was in contact with people who had been the subject of FBI investigations, either investigations that were closed or that were still open. I would urge you not to make too much of that.

There were no contacts between either of the killers and subjects of our investigations that were of such significance that it raised these killers up on to our radar screen. We’re obviously looking very closely at those contacts but I would not want you to over-index on that just yet.

Honestly, it hadn't even occurred to us to over-index on that. Lynch was similarly nonspecific, though she said nothing so deliciously FBI-sounding as "over-index":

[Farook] did have a number of contacts with individuals that had come on the FBI's radar screen for a variety of reasons. And so depending upon those reasons, those individuals may have been under review for any number of things. And he was someone who had contact with them ... We are also looking into what those connections were, if any conversations, if any -- all of that is part of what we're looking at.

Lynch again warned it would be premature to "try and define these two individuals right now." Damn it, why won't she just say the magic words "Radical Islamic Terrorists" so Sean Hannity can get some sleep?

What About Farook's Mother? She Had To Know He Was A Terrorist!

Lynch refused to play mind-reader here, either: "I can't speak to that fact of the investigation. Obviously, it's something that we're looking at very, very closely." She did say the small scale of the operation -- a husband and wife stockpiling ammo and spending quality time building bombs in their garage while no one reported them -- "indicates the evolving nature of the threat that we are seeing." When Lynch mentioned "lone wolves" acting on their own, without direct guidance from a ringleader, Chuck Todd got a little tetchy, noting "we've been hearing this for six years," and wondering:

[contextly_sidebar id="Em9tTMcS9kuBKs3aDDPEBS0TQ6aAI8ID"]Lynch did not reply, as we might, that America seems perfectly willing to accept a mass shooting every week as a mildly unsettling side effect of having about as many guns as there are people in this country, and being killed by a self-taught Islamic radical doesn't make anyone deader than they'd be if a drunk spouse shot them. Instead, she said intelligence and counterterrorism strategies are adapting as terrorist strategies evolve, and in many such cases, someone near to the perpetrator "did notice a change." So she encouraged people to report substantive worries to law enforcement:

We are on alert 24/7. And everything that you report will be investigated. We do it in private. We do it covertly. This could be a problem, it could simply be your neighbor having a bad day. But better be safe than sorry.

Hmm. We want to feel safer, but now we've got that William S. Burroughs line about "a nation of finks" going through our heads, and it's distracting. So yes, if you see something, say something, unless it's something really stupid. Save it for Fox News.

On Saturday, the FBI searched the home of Enrique Marquez, a friend and former neighbor of Syed Farook. According to the Wall Street Journal, authorities say Marquez purchased the rifles Farook and Malik used in the shootings; Marquez hasn't been arrested or charged with any crime, again according to a "law-enforcement official." And while all four of the couple's guns had been purchased legally, both semiautomatic rifles had been modified in violation of California law:

One of the semiautomatic rifles -- made by DPMS Panther Arms -- had been changed to more easily accommodate a large-capacity magazine, according to Meredith Davis, a special agent with the Bureau of Alcohol, Tobacco, Firearms and Explosives.

There was also an attempt to alter the other weapon -- a Smith & Wesson M&P model -- so it would fire automatically, according to the ATF, a process that takes some expertise to get right, according to gun experts.

The WSJ didn't specify whether the alteration was successful, but "attempt" suggests the couple weren't expert gunsmiths.

So How Scared Should We Be?

You should watch what you eat, get more exercise, quit smoking, wear your seatbelts, and use eye protection while working with power tools. Heart disease, cancer, and accidents are still a lot more deadly than terrorists.