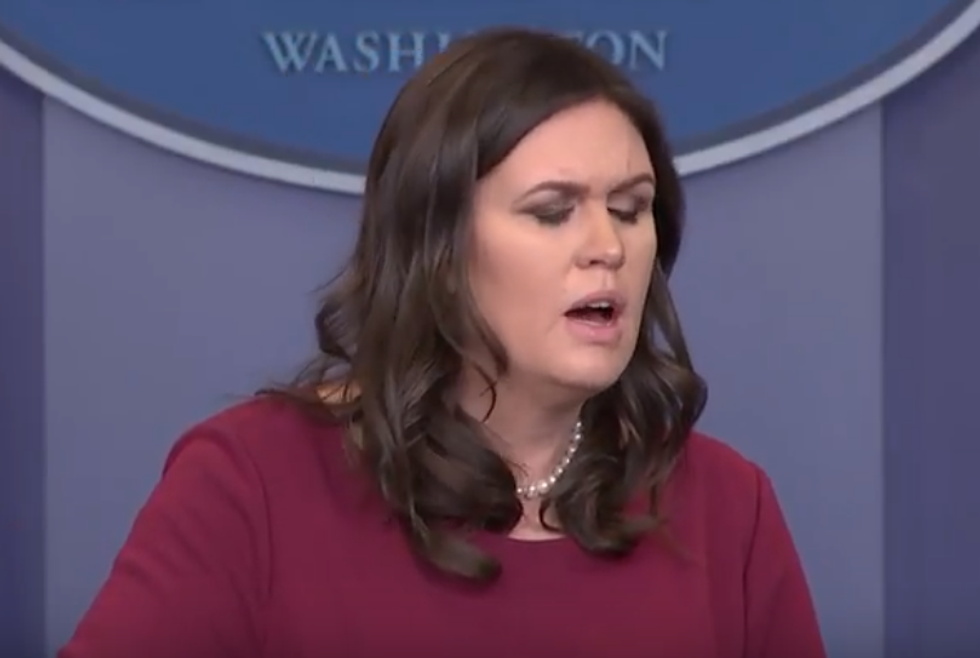 Sarah Huckabee Sanders was running hot yesterday! Insulting a domestic violence victim, smack talking April Ryan, just plain making shit up -- check, check and CHECK! On the plus side she wasn't wearing a tablecloth. So, YO GO, GIRL!

Feel free to watch the whole video, if you have major masochistic tendencies. Extra credit if you wade through this White House press release titled Did You Know? How $200B can be leveraged to $1.5T. WE DARE YOU!

It is Infrastructure Week again, so Transportation Secretary Elaine Chao got the ball rolling with some absolute nonsense on Trump's magical plan to repair the nation's roads and bridges by cutting billions in infrastructure grants for local projects already underway. How's that going to work?

You know, federal money is not free. Federal money comes from our communities, people, taxpayers, and our communities. They take that money, send it to Washington, and then we decide how to use it, and send it back to the communities with a lot of strings attached on what they need to do.

So what we are trying to do is to recognize the states and localities, communities understand best what their infrastructure needs are, and to allow them to have much greater flexibility to decide their own projects, in conjunction and in partnership with the federal government.

So, your plan is to sell it all off to big business, right? A trip to Kroger will involve five different toll roads, but we can't raise gas taxes because that would hurt poor people. GOT IT.

Then it was on to the Huckster, who spent the past week polishing a story line that it was all the FBI's stupid fault for not finishing their security evaluation of ladybeater Rob Porter on time. Probably too busy doing Deep State tapps to the president's wires!

REALLY? That's really what you're going with here? Because it has "White House" right in the name.

Again, that would come through the White House Personnel Security Office, which had not completed their investigation and not passed that information to the White House.

Okay, softball question. You can do it, Sarah! Should men beat their wives?

You guys are totally not down with domestic violence, right? It's not like there are very fine people on both sides, are there?

REPORTER: And does the President believe the women?

MS. SANDERS: Again, the President takes all of these accusations very seriously. He believes in due process. Above everything else, he supports the victims of any type of violence, and certainly would condemn any violence against anyone.

Huh. Well, is there anything you all would change if you had to do this whole staffer-who-hits-women-and-can't-pass-background-check thing again?

Look, as I said yesterday, I think every day we come here, we do the very best that we can, and every day we can do better than the day before. And we’re going to continue to strive for that. We’re humans, making us imperfect people. And so, every day, I think we can learn from the day before, and we can strive to do better. And that’s our goal, certainly within our team, and we’re going to continue to try to do everything we can to help serve the American people to the best of our ability.

Yeah, we've all seen the bumper stickers. Christians aren't perfect, just forgiven. But you'd still let Hope Hicks write that nonsense about Porter being a swell guy, even though they're bumping uglies?

She was not part of a lot of the conversations that took place. I don’t recall any of you being in the room to be able to say specifically what comments she made or didn’t make. She’s the White House Communications Director, and is an important and valuable member of the staff, and she has done a great job in that role.

Oh, the WERE YOU THERE argument. Did you learn that one in Bible college when they were teaching you how to argue with an evolutionist?

If you think about it, Sarah's the real victim here!

Say, you wanna attack a domestic violence victim while you're up there? We hear Rob Porter's wife says she "expected a woman to do better” in a position of power, like you and Kellyanne Conway.

I would never presume to understand anything going on with that individual, nor would I think that she could presume what’s going on with me or the way that I’m responding.

Mmmm hmmm. We're sure this whole thing is very hard on you.

Would it cheer you up to pick a fight with a black lady? Because April Ryan has a question about funding for the Violence Against Women Act.

MS. RYAN: You’re saying the President is going to fully fund the reauthorization of the Violence Against Women Act that’s up in March. How much — what is he putting in his budget proposal?

MS. SANDERS: I’d have to look at the specific number, but it was rolled out in the budget that was presented yesterday.

MS. RYAN: You mentioned it, but is the number, the number that it’s always been, or was it just done? Can you talk to us about the funding?

MS. SANDERS: I know it what was requested has been put into the President’s budget.

You're not going to pull a fast one on us by, like, taking the money out of SNAP benefits or something, are you? Think fast, think fast! Time for that special white lady passive aggressive condescension!

MS. SANDERS: We don’t write a budget, like, in 20 minutes, so it’s been part of something that’s been ongoing.

Well, we're not sure what budget fuckery you pulled to fund VAWA. But we know your day is a little brighter since you got to be an asshole to April Ryan. Well done, Sarah!

Can't hardly wait to see what shit our girl has planned for this afternoon's presser!

Please click here to fund us! We had to watch that woman, and now we need a juice cleanse!