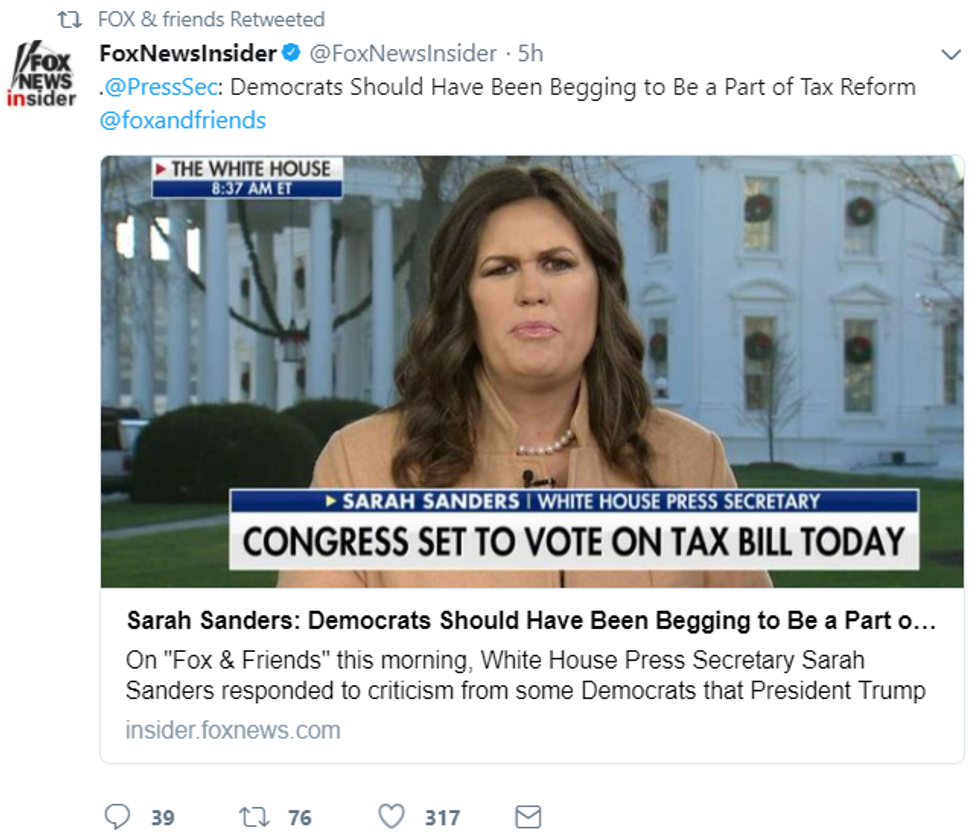 LOL not even Fox News screengrabs her nice.

What: Moving her lips and therefore lying about the GOP tax "cut" bill, because lying is what she does, for her job.

When: Tuesday morning during an interview with state-run media organization Fox News.

What shit did she say: This shit right here!

Speaking on "Fox & Friends," Sanders said Trump said many times that he was willing to work Democrats and invited them to the White House on several occasions.

"That’s something that Democrats shouldn’t need to be begged to be a part of. They should’ve been begging and banging down the door of the building behind me to be part of this process and to be part of helping more Americans be more successful."

That is some shit: Riiiiiiiight? The Democrats should have been begging to be part of Republicans hanging themselves by passing shitty tax legislation, like they did in the 1980s and 2000s, as if Dems cannot remember what happens to the economy when the GOP makes law based on laughable economic "theories" long ago debunked by literally every serious economist? OK.

Also, re: begging, weren't Democrats begging the GOP to let them (and American voters) SEE THE FUCKING BILL SOMETIME MORE TIMELY THAN FIVE SECONDS BEFORE THEY VOTED ON IT? Tell us, Democratic Rep. Don Beyer of Virginia:

Also too, we are just saying: Hey, you never know, if the GOP had actually let the Dems in on the process, they might have picked up a Manchin or a Heitkamp or something. Maybe! Of course, we understand that Mitch McConnell and Paul Ryan are just fucking awful at keeping a caucus in line -- it's taken ALMOST A FULL YEAR for the GOP, which controls the whole entire government, to pass "a thing" and give Donald Trump "an accomplishment," and no, the new SCOTUS dipshit doesn't count -- so they probably didn't have much time to BEG the Democrats to help create the legislation the Democrats were not allowed to see.

Democrats probably don't even have the address of the lobbying firm on "K" Street where this shit was written, do they: Nah.

Some more context: At press time, Poot Lips concluded her daily Two Minutes Hate press conference by repeating her longstanding lie that Trump can't release his tax returns because they're "under audit," as if that is even a thing (it is not a thing). Now that the House GOP has passed its scammy tax cut for Bob Corker and some other gabillionaires out of conference -- the Senate votes later today -- Trump has even more incentive to keep the returns under lock and key, not only to hide all his (alleged!) weird Russian money ties (maaaaaaaybe laundered money ties, but who knows? Robert Mueller. That is who knows) but also to hide how Team Trump will make out like bandits as a result of this bill.

What's next for Poot Lips: More lying, as usual. Also maybe she will bake some gross pies for Christmas, like a common Sarah Huckabee Sanders. The secret ingredients are store-bought crust and lies, allegedly.